Roman Forum find could be shrine to Rome's founder, Romulus 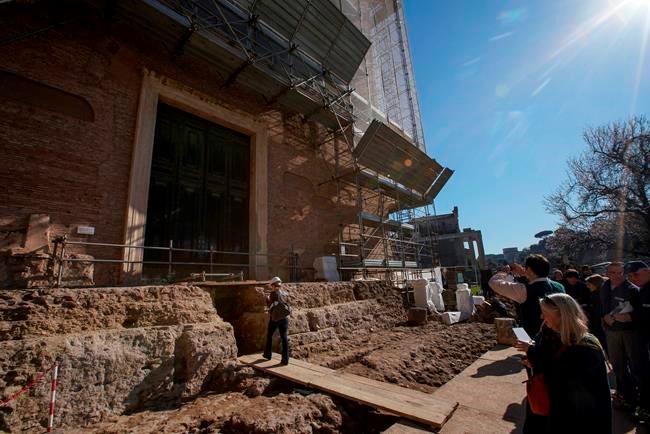 ROME — Italian archaeologists unveiled to the press Friday an exciting new find from the Roman Forum, which they say could be the lost shrine dedicated some 2,600 years ago to Romulus, Rome's legendary founder and first king.

Visually, the discovery first announced Tuesday is not very remarkable: Peering down in an excavated space beneath the Curia Julia, or ancient senate house, one sees something resembling a stone washtub that archaeologists say is a sarcophagus, or stone coffin. There's also a cylindrical stone block, possibly an altar.

Both items are made of tuff, carved from the Capitoline Hill that overlooks the Forum, and which is home to today's City Hall.

The recently excavated area “represents a place, which in history and in the Roman imagination, speaks about the cult of Romulus.” said archaeologist Patrizia Fortini.

Fortini says no one's hypothesizing the sarcophagus actually ever contained the bones of Romulus who, with his twin Remus, established the city near the Tiber River around 753 B.C. and founded the kingdom of Rome. It likely dates to the 6th Century BC, some 200 years after Romulus' time.

“We don't know whether Romulus physically existed" the way he was described in legends, Fortini said.

But some ancient sources claimed that Romulus was buried in the area of the find, and the sarcophagus could have served as a memorial.

Alfonsina Russo, the archaeologist in charge of the site, noted that according to some ancient traditions Romulus was killed and chopped to pieces, or ascended into heaven.

“Therefor this cannot be his tomb, but it is very likely, we believe, that this is a memorial site, a cenotaph,” Russo added.

While excavations continue, authorities hope the public will be able to stroll underground to view the find in about two years.

Legends hold that Romulus and Remus were suckled by a she-wolf as babies, but later Romulus killed his twin brother in a dispute over the founding of Rome.