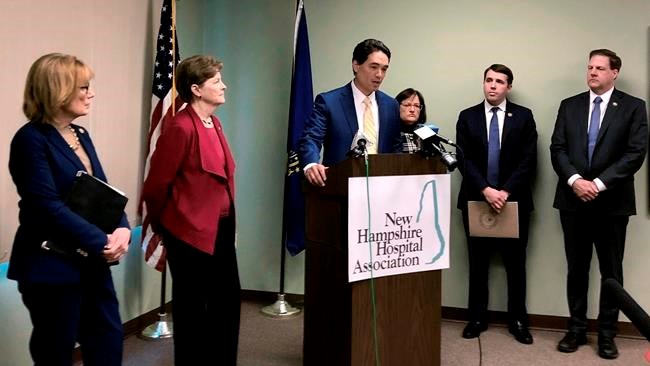 CONCORD, N.H. — A hospital employee who recently to Italy is the first person in New Hampshire to test positive for the new coronavirus, state officials said Monday.

The male patient is experiencing mild symptoms and remains at home in Grafton County while health officials investigate, according to Dr. Benjamin Chan, the state epidemiologist. Hospital officials confirmed the patient is an employee of Dartmouth-Hitchcock Medical Center, which has set up an incident command .

While it could take several days for the Centers for Disease Control and Prevention to confirm the state's test results, officials said they are moving ahead with containment plans.

“We're going through the process of not only figuring out how to reach out to individuals that may have had contact with this individual, but much more broadly, how do we address concerns of the public," said Dr. Joanne Conroy, Dartmouth-Hitchcock's CEO.

The illness, named COVID-19, is characterized by fever and coughing and, in serious cases, shortness of breath or pneumonia. As of Sunday, the U.S. had at least 80 confirmed cases of the virus, which first appeared in late 2019 in Wuhan, China. Worldwide, the number of people sickened has climbed to more than 88,000, and there have been more than 3,000 deaths, most of them in China.

New Hampshire health officials were joined at Monday's news conference by Republican Gov. Chris Sununu and members of the state's Democratic Congressional delegation, all of whom emphasized .

“We will continue to work together to make sure that we do everything possible to address the public concern,” said U.S. Sen. Jeanne Shaheen.

“The most important message we can get out is that the state is prepared,” said Sununu. “We don't know how it's going to develop on the next few weeks, but it is an all-hands-on-deck effort.”

Sununu said he spoke to Vermont Gov. Phil Scott on Sunday not just about what's happening in their states but also Canada, which borders northern New England.

“Communication and , that's really the most powerful tool we're going to have,” he said.