Are Built-In Bras Right for You? Here’s What You Need to Know

How to make an informed choice that matches structure, style, and comfort with the available options.
Great West Media I Presented by Didsbury Dental Aug 30, 2021 7:00 AM
Listen to this article
00:04:38

All women know that finding the perfect-fitting bra can be a challenge, but it’s an important endeavour - a good bra offers support and structure without sacrificing comfort. In your search for bras, tops, and workout gear, you’ve probably debated purchasing items with built-in bras, but are they really worth it (and do they get the job done)? Here’s the lowdown on built-in bras and what you can expect from various kinds.

There are many times when it would be ideal to forgo wearing a bra, but the need for a bit of support or an extra layer is still present – cue the built-in bra. Often found in camisoles and tank tops (but also in swimsuits and even nightgowns!), built-in bras are perfect for an “in-between” need. These bras are sewn directly into the top and often have seamless cups and bands that are more comfortable than typical lingerie. Another perk to the built-in bra is that you don’t have separate straps; wearing a tank top can be more streamlined without worrying that your bra straps will show or clash. Many women also gravitate towards built-in bras for low-impact exercising - the combination shirt/bra doesn’t add as much fabric, so you feel cooler, and you don’t have to worry about peeling off a sweaty bra at the end of a workout!

A built-in bra is not for every occasion or even everyone. Even the most supportive types will not give you the same structure as a standalone well-fitting bra. Keep in mind that adjustments you make to the bra will adjust the entire shirt, so tightening the straps, for example, will also raise the neckline. For this reason, built-in bras generally aren’t a good fit for women with substantially asymmetrical breasts. Similarly, women with larger breasts don’t usually find enough support from a built-in bra for even light physical activity; others with smaller breasts may only feel comfortable in light to moderate activities. At the end of a long day, the lack of proper support can leave the ligaments and muscles supporting your breasts tired and in pain. Therefore, the most important aspect of built-in bras is that you try them on and experiment with various activities before committing to an entire day. 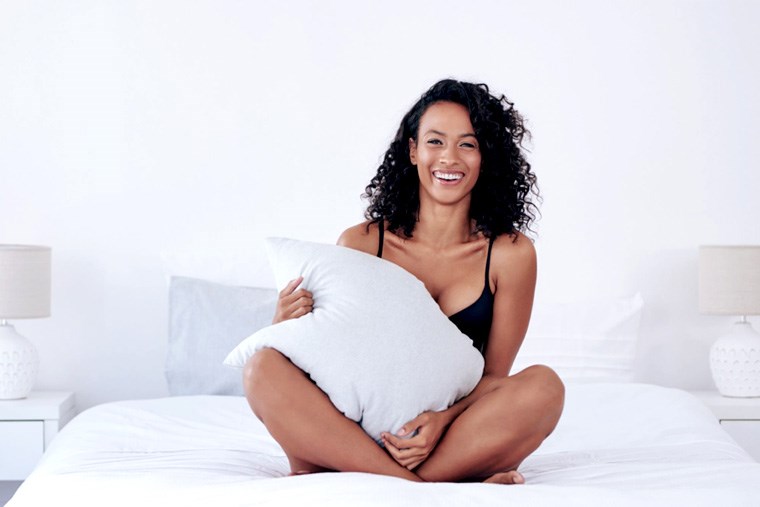 One of the simplest forms of a built-in bra is called a shelf bra. Typically just an added layer of fabric over the breast area (with an elastic band at the bottom), a shelf bra doesn’t provide much support but is seamless and comfortable for many women. The least expensive option, shelf bras, are favourites for lounging at home, wearing during yoga, and everyday wear. Because these bras don’t have any cups or padding, you might find your breasts shifting more during the day, so be aware of this potential and plan activities accordingly. Many women also wear shelf bra tops to bed to have a bit of coverage and light support even while sleeping (but none of the typical discomfort from a bra!). The ATTRACO shelf bra camisole is a great option for those who want adjustable straps and a long, layering look.

A more structured version of the shelf bra, tops with padded cups built-in offer a bit more support and shaping. If you find that under and between your breasts gets sweaty with a shelf bra, try finding a top with padded support instead – it will help keep things lifted and separated. Padded cups can be harder for women with asymmetrical breasts or breasts that are large for their frame; the pads will end up being too small and ultimately uncomfortable. Many of the pads in these tops are removable so that you can vary whether you use them. The padded option from SheBird is versatile and even has a mesh cooling panel to help alleviate sweat during active use.

For those women who want built-in bras with more support, hidden underwire versions are a great option. Similar to regular underwire bras, these tops have underwires sewn into the fabric to provide extra strength and structure; these tops often have hidden clasps underneath the top layer, as well, for more adjustment options. These tops are generally more expensive than other built-in bras, and it’s especially important to get the right size so that the wires aren’t pinching and poking. These Bravissimo non-padded tank tops offer hidden underwire support that’s perfect for a casual day out and about.

While built-in bras aren’t for everyone, they can be a great staple to have available in your closet for the days that require easy, light support - find a style that works for you today!

This story was made possible by our Community Partners Program. Thank you Didsbury Dental for helping to expand local news coverage in Alberta. Learn more.

Finding Some Calm in These Stormy Times: Mindfulness and Meditation
Jul 25, 2022 7:00 AM