What happens when the gas goes out? 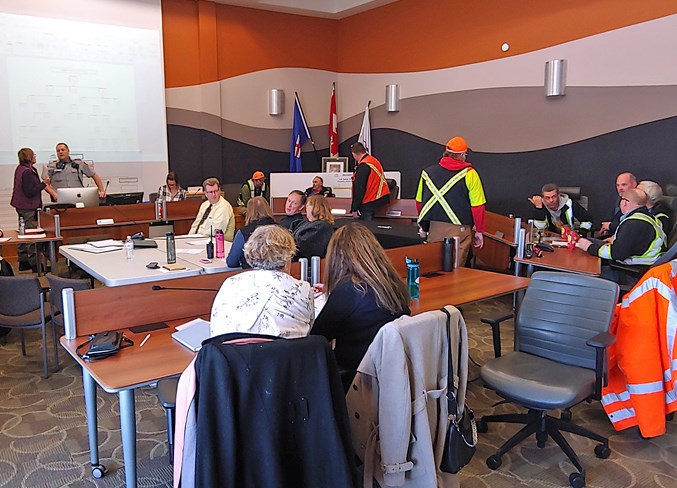 Town of Sundre staff participated last week in a surprise drill that involved establishing an emergency operations centre in council&#8217;s chamber. The staged scenario depicted a hypothetical situation wherein a sudden drop of pressure in the municipality&#8217;s gas supply leaves many homes without heat during sustained extreme sub-zero temperatures.

“Our scenario was that we had a disruption in the town’s gas supply,” he said.

The mock situation involved a sudden drop of pressure in the municipality’s gas system that left the furnaces in many homes unable to generate heat in extreme sub-zero temperatures. The drill involved investigating and identifying the cause of the drop in pressure and employing a temporary solution until the problem could be properly fixed, he said.

“Teams were delegated to head out and help residents relight furnaces and heating apparatus,” he said.

However, as the exercise was a tabletop scenario, no one was actually physically deployed into the community, he added.

“It was all simulated in the meeting.”

Everything went over well, he said, adding criteria outlined by provincial regulations were all met.

“We have an emergency call-out system in place to alert all of our staff,” he said, adding staff were not previously informed of the staged scenario in order to adequately test the call-out system.

The drill is also designed to assist staff in learning how to set up a central communications and coordination hub in the event of a disaster as efficiently and effectively as possible. Part of the process involves spreading the word to the community about an unfolding situation, he said.

Some residents replied to a test on the town’s social media page, indicating when they saw the alert, he said, also encouraging anyone with a smartphone to download the municipality’s app.

“It’s not just for emergencies,” he added.

The downloadable software is also a convenient tool that can be useful for anything from filing concerns to finding information about the town, including some community event listings, he said.

While the municipality’s own alert messaging in a real emergency would come in handy, the app is not intended to replace the Alberta Emergency Alert, he stressed, also recommending anyone who has not already done so to download that provincial app.

A few ideas emerged from the drill to enhance and streamline the overall response in the event of a real emergency, including avoiding the use of acronyms to reduce confusion and improve communications, he said.

Professionals who work in the gas industry, for example, are more familiar with terminology and definitions that not all town staff might necessarily be as well versed in, he said.

Although the threat of inundation is a possibility Sundre must be ready to face, Heerema said, “We’re well versed in flood preparation. So it’s nice to run a tabletop exercise that’s different and outside the comfort zone of what we’re used to.”

The primary idea of doing drills is to ensure the municipality is in a position to respond to any emergency, regardless of what the situation might be, he said.

With new regulations coming into effect in 2020, a local authority’s emergency management agency must engage in at least one such exercise per year. Additionally, a more comprehensive mock scenario in which participants carry out actions as if the significant emergency or disaster was actually occurring, but without deploying personnel or other resources, will also have to be carried out once every four years, he said.

For future drills, Heerema said the goal will be to focus on scenarios that could potentially happen in Sundre. That could include a variety of emergencies such as a flood, wildfire or drought.

“It’s really quite endless, aside from trains, because we don’t have tracks,” he said with a laugh.

Even so, Highway 27 is a high load corridor with many trucks hauling dangerous goods, he said, adding a major crash would not be dissimilar to a derailment with the potential to have large quantities of hazardous materials spilling out.

When asked what words of advice he had for people in the community, the director of emergency management encouraged everyone to visit the municipality’s website for information on preparing emergency kits as well as detailing residents’ responsibilities when disasters strikes.

Visit www.sundre.com and click on Protective Services under the Your Government tab to find details under Emergency Management Services. “There’s great information from the town and the province on getting ready with 72-hour kits and what your responsibility is to help look after yourself and your family.”