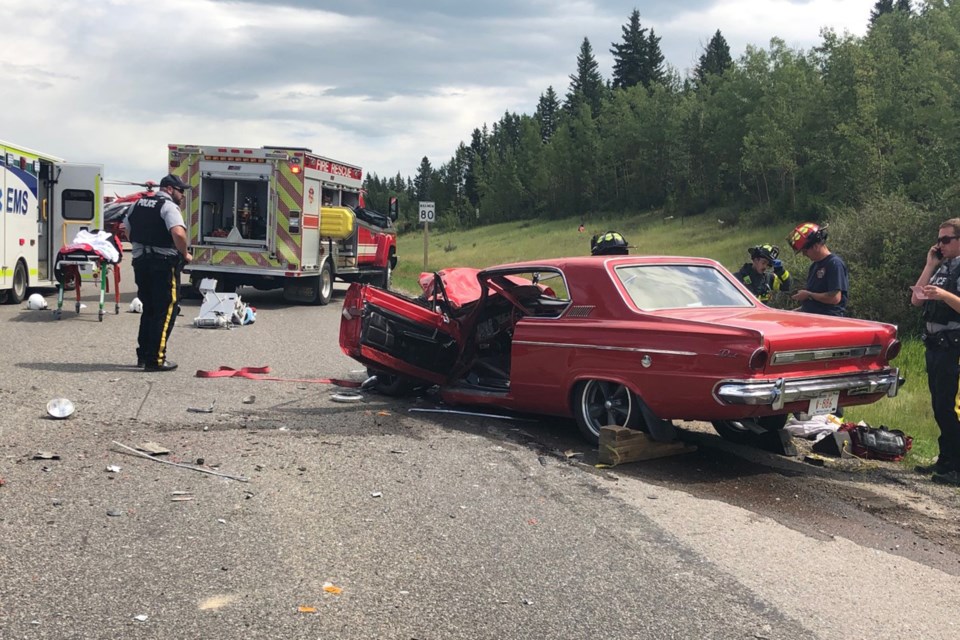 Sundre police and firefighters work near a 1963 Dodge car destroyed in an Aug. 6, 2020 collision east of Sundre. File photo/MVP Staff

Editor's note: This article has been updated with the latest information from Sundre RCMP.

The crash occurred at about 1 p.m. on Aug. 6, 2020 when a westbound 2009 pickup truck crossed over the centre line and struck an eastbound 1963 Dodge car, said police at the time.

The collision caused the car to spin around and strike a westbound 2018 pickup truck that was unable to avoid the collision, police added.

The three occupants of the 2018 pickup truck were uninjured in the collision.

The driver of the Dodge, identified as Travis Hanna, was airlifted to Foothills Medical Centre where he remained at least into September.

The 43-year-old Innisfail driver of the 2009 pickup suffered serious but non-life threatening injuries and was transported to Sundre hospital by ground ambulance.

According to a Jan. 8 press release, Jeremy Meissner, 44, identified as the driver of the 2009 pickup truck, has now been charged with the following criminal offences:

• failing to comply with a breath demand

• four counts of failing to comply with a release order

In the last public update given to The Albertan in mid-August 2020, Sundre RCMP Sgt. Jody Achtymichuk said the detachment was waiting for some results from the investigation.

Cpl. Mandel said in the Jan. 8 press release that through a judicial authorization, the Sundre RCMP obtained the blood of the 2009 pickup truck driver, which was submitted to the National Forensics Laboratory Services in Edmonton for analysis.

Mandel said there was a delay in obtaining the analysis of the driver’s blood due to COVID-19 protocols but that “the Sundre RCMP eventually received the results and charged Mr. Meissner with the appropriate criminal charges.”

“The lives of the victim and his family were dramatically changed from that collision that day,” said Mandel in the statement, adding he hoped the judicial system provides peace to those impacted.

According to the page, Hanna has received a number of surgeries since the crash and was moved out of ICU and into the brain trauma unit at a hospital in Calgary.

“We continue to be in awe of the massive outpouring of support that is offered everyday,” said page organizer Kristine Roberts in late August.

Meissner was arrested in Innisfail and brought before a justice of the peace.  Police say he was released on a $2,000 promise to pay release order, with several court-imposed conditions, and ordered to appear in Didsbury provincial court on Feb. 8 to speak to the allegations.