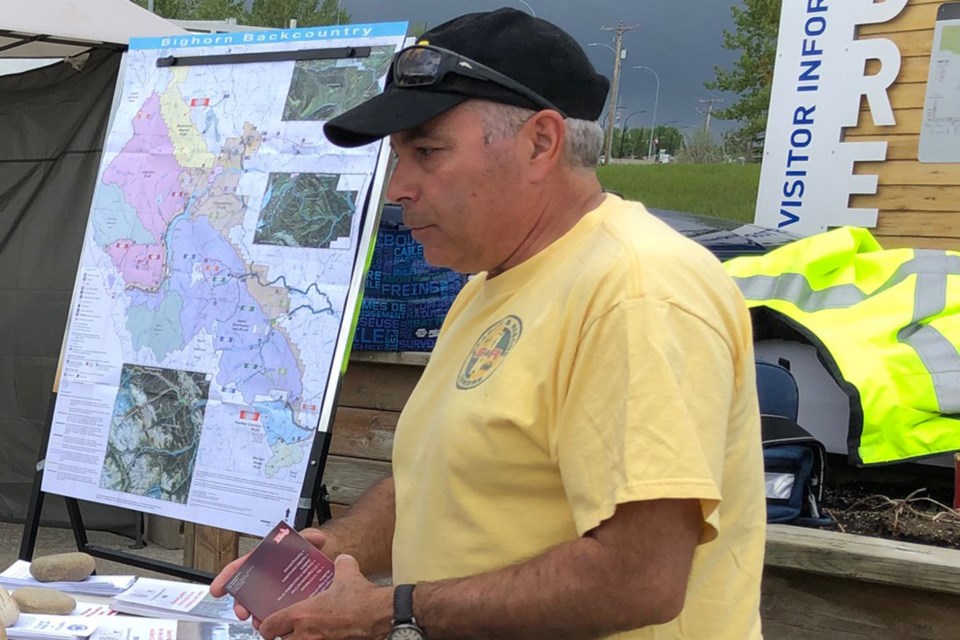 SUNDRE — Although the May long weekend in Sundre’s West Country was largely tame with people mostly behaving, authorities conducted an extensive search and rescue effort that seemed to have turned out to be a wild goose chase.

“We’re thinking it’s a prank,” Cpl. Resus Organ, the Sundre RCMP detachment’s acting commander, said when asked whether police had concerns anyone might still be missing.

On the night of Friday, May 21, police received a report about a crash off of a rural road that had left at least one person injured and requiring assistance, Organ said following the long weekend during a phone interview on Tuesday, May 25.

“We spent a good 18 hours looking with search and rescue,” Organ told The Albertan.

“But we couldn’t locate him and we never did find the location (of the reportedly wrecked vehicle). So, we don’t know if it was ever true, or just some kid pranking us on a phone system. We don’t know.

Also participating in the search was the Sundre Fire Department, whose chief Ross Clews said ended up dispatching members and two trucks at around 9:30 p.m. on May 21.

Although the firefighters were stood down by about 3:40 a.m. on May 22, RCMP continued the search effort in coordination with volunteers from the Sundre as well as Mountain View search and rescue associations, Clews said.

“We don’t know what it was. It was a weird one,” the chief said about the call.

“It was a radio dispatch — like a radio call someone made. So, it’s untraceable to speak of,” he said, adding the person who called authorities described a location north of Sundre in the James River area.

“We searched way beyond the points we were given to ensure there was nothing there. Nothing was found,” he said, concurring with the corporal’s conclusion.

“We’re thinking it could have been a prank, yes — a false call.”

Search and Rescue brought in

Providing additional perspective from the Sundre Search and Rescue Association, senior search manager and seasoned veteran Roger Tetreault said he was first contacted when the search got underway.

“They called me for some information, just because of my local knowledge of the area,” said Tetreault, adding a search team was called out early on Saturday morning before dawn.

There were 13 members from Sundre, plus another four volunteers from Mountain View search and rescue, assisting five RCMP officers, an Alberta Conservation officer, three civilians and two aircraft from the RCMP’s Civil Air Search and Rescue Association out of Red Deer along with a ground coordinator, he said.

“So, that’s a big search,” he said, adding the operation involved roaming around back roads on the lookout a vehicle in a ditch.

“Considering the fact that they believed it was a vehicle rollover, we drove every road out there,” he said, adding teams largely expanded their search to a bigger area that had been covered the night before by police and firefighters.

“But the chances are, with all the thousands of people out there on the long weekend, if we didn’t come across them, I’m sure a member of the public would have."

Later that evening, the search was — in the absence of the discovery of any evidence to justify the effort to keep looking — suspended by police, he said.

“I don’t know what to make of that one,” he said, later adding when asked that Sundre SAR has never experienced anything quite like it.

Other types of search operations that end up being what could be called wild goose chases are generally the result of a person being erroneously reported missing when they’re simply somewhere else, he said.

“But with this one, it seems strange because it was reported by a second party that heard a conversation on a radio channel for someone potentially looking for help,” he explained.

“We don’t know what happened — that’s kind of more up to the RCMP to interpret the (nature of a call and) whether it’s believable or not. But it seemed to have enough validity that they thought we should go looking for these people or person.

“Once you cover your priority areas, and you’ve done your due diligence with checking all logical areas you could possibly search — it’s pretty much up to the RCMP at what point they decide to call it off or suspend it until more information appeared."

For instance, had someone subsequently called in a missing person report, or perhaps a camper alerted police that a neighbouring person or group failed to return to their campsite after a day or two, “Those would be kind of solid leads that would you make you go out and continue the search. But none of that came in,” he said.

“If it was an actual prank call, it’s pretty disheartening to consider how many resources they used up on the busiest weekend of the year.”

Since nothing turned up throughout the course of the extensive search, Organ said he did not believe there was further cause for concern.

Meanwhile, the corporal said the only other close call involved a vehicular mishap on Highway 27 near the Cowboy Trail’s southbound junction with Highway 22.

Fortunately, no one was hurt when a loose tire came off an RV’s axle and hit another truck, he said.

“It happens more regularly than you’d think,” he added.

The fire chief added both vehicles were able to drive away from the scene after the dust settled.

“Makes you wonder how many people just grab their RVs in the spring without doing a good mechanical check of them,” said Tetreault.

“Or they’re just not familiar with driving some of those units — they’re pretty big. If you’re not comfortable or familiar driving something like that, it could be quite intimidating, or if something goes bad, it goes bad in a hurry.”

Police also conducted some random check stops, said Organ, adding he was aware of at least one impaired driver being nabbed by RCMP, plus several warnings issued to motorists who blew under the limit in the lead-up to the long weekend on Thursday, May 20.

Speeders and reckless drivers also did not seem to be an issue, with the corporal pointing out the “mass exodus” of outdoor enthusiasts heading home on Monday, May 24 resulted in near bumper-to-bumper congestion from west of Sundre on Highway 584 headed east on Highway 22 on the other side of town up and past the hill, he said.

Otherwise, both the corporal and the fire chief were grateful for a mostly peaceful long weekend that drew out many Albertans but resulted only in a handful of calls, of which none were major emergencies.

“It was full everywhere we went,” said Organ. “There was a ton of people.”

And interactions with the public were for the most part positive, with police responding to only a few calls including a couple of domestic issues as well as fights and traffic complaints, he added.

“The campers that were out this weekend, when we were out doing patrols with the quads and our vehicles, they were all great. They were mostly families — there was nobody out there to cause any problems. So, it was actually a very good weekend for us," he said.

Many seemed to have made their way out from the city, and appreciated the presence of patrolling officers, he said.

“We didn’t have any problems this weekend — we were very fortunate," he said.

Clews echoed similar comments, and said that aside from the tire incident, a medical assist, a faulty alarm that went off at a local business that needed its panel reset, and the search effort, “The weekend for us was actually quiet.”

There wasn’t even a single grass or debris fire reported, he said.

“I love it when business is down, personally — it’s the only line of work where we want it to be slow," he said.