Carolyn Sykes promises only to do her best and help make Sundre a year-round destination
Apr 25, 2021 10:00 AM By: Simon Ducatel 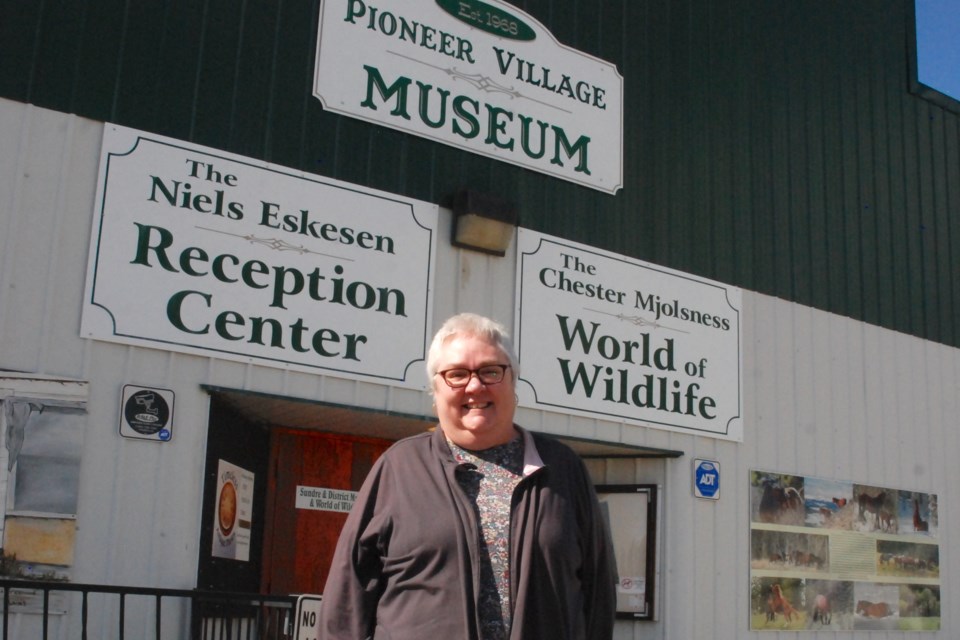 Sundre resident Carolyn Sykes, who volunteers at the Sundre & District Museum, has decided to run for council in the upcoming municipal election. Simon Ducatel/MVP Staff

SUNDRE — A candidate in the upcoming municipal election has no intention of offering wishful platitudes just to win a seat on council.

“I’m not going to make promises I can’t keep,” said Carolyn Sykes, who recently filed her nomination papers for the Oct. 18 election.

“I’m only making one promise, and that is I am dedicated to make Sundre a profitable destination all year round,” Sykes said during a phone interview.

“There’s no reason why we can’t be profitable in all four seasons,” she said, musing about expanding efforts to be a host community for events that keep local hotels and restaurants busy.

Offering full disclosure, Sykes wanted to add that she was appointed to the Sundre Vision Committee with the objective of being involved in brainstorming ideas to help attract new businesses as well as to help thrive existing enterprises.

Describing as “quite incredible” the recent opening of two new restaurants with a third on the way “during this time of unease and unrest,” the 57-year-old expressed enthusiasm about the municipality’s potential.

Also ranking among her top priorities is ensuring the best interests of the local senior population are always considered in the decision-making process, as well as finding ways to entice not only youth to come back to Sundre to raise their own families after completing their studies, but also encouraging new families to set their roots here and make Sundre their home.

In short, her primary objective is to connect with as many people as possible to understand and consider a variety of views.

“If I were to have a motto, it would be this: communication is key,” said Sykes, adding she wants to be a voice for the community who will bring issues brought to her attention before council for discussion.

“Your input is valuable to me," she said.

However, she said a healthy and constructive discourse must be built on a foundation of civility and decency.

“Everyone is entitled to be treated with respect,” she said, adding that criticizing from the sidelines is much easier than taking the time and making the effort to actually get informed and involved.

“I’m never going to please everybody, and not everybody’s going to like me. I get that,” she said, adding she will nevertheless remain receptive to feedback. “I welcome all criticism and hope that I can learn from it.”

But there’s no room for personal attacks, she said.

“I won’t put up with name calling," she said.

As a resident who does not own a business, Sykes said she is invested in the entire town without any specific preferences toward any one industry.

“I think I bring to council the ordinary people here in town, the ones that don’t have a business. I’m not there for personal reasons — I’m there for everybody, to make this town a better place to live," she said.

Although she can’t promise to reduce taxes, she said successfully bringing new businesses to town and helping existing ones expand is key to at least ensuring there won’t be major increases by generating new revenue.

“If we could bring more businesses to Sundre, the chances are very good that your taxes won’t rise, because we will have more tax money coming into the town," she said.

While Sykes wants to further tap into Sundre’s potential, she also wants to maintain the small-town atmosphere that makes the community so unique.

“I don’t believe that Sundre is the place for a big box store,” she said. “You want to keep the quaintness of the town, but still bring in new ideas and new businesses to town.”

Although running for council is a whole new experience for her, Sykes has not only been listening in on teleconferenced meetings to stay up to speed on the issues, but also brings with her background experience working for the City of Grande Prairie, where she worked in the payroll and finance department.

“Corporate services is what they call it now — they change their names faster than you can get the business cards written up,” she said with a chuckle, expressing a fondness for a sense of humour.

“But that doesn’t mean that I don’t take things seriously. I find sometimes humour breaks the ice a little bit and shows that we’re human.”

On the more serious note of the ongoing COVID-19 pandemic and the anti-restriction rallies led by Mountain View Freedom, Sykes said people should always have the right to protest so long as demonstrations are peaceful, but that she disagrees with the group’s message.

“This probably will not be a popular view. But I feel like if we just all followed the rules, for a short time — if we had done this even earlier than what has happened — this COVID situation wouldn’t be as dire as it is today,” she said, lamenting how quickly online discussions tend to devolve to insults.

“This year has also taught me that you don’t need to comment on everything. I stay away from the COVID commenting, because you just get beat up."

Those challenges aside, getting involved in politics has also been a lifelong dream.

“It’s always something that I’ve dreamt of doing,” she said when asked why she decided to run for council.

Throughout the past year of pandemic protocols, she found plenty of time to reflect on her path forward.

“I want to do some things that make me happy. I went ahead and did it. Whether I win or not, I can say at least I tried,” she said, hopeful that her decision to run might also perhaps inspire others who have sat on the fence to pursue their own dreams.