Survivalists sought to test their skills in Sundre competition 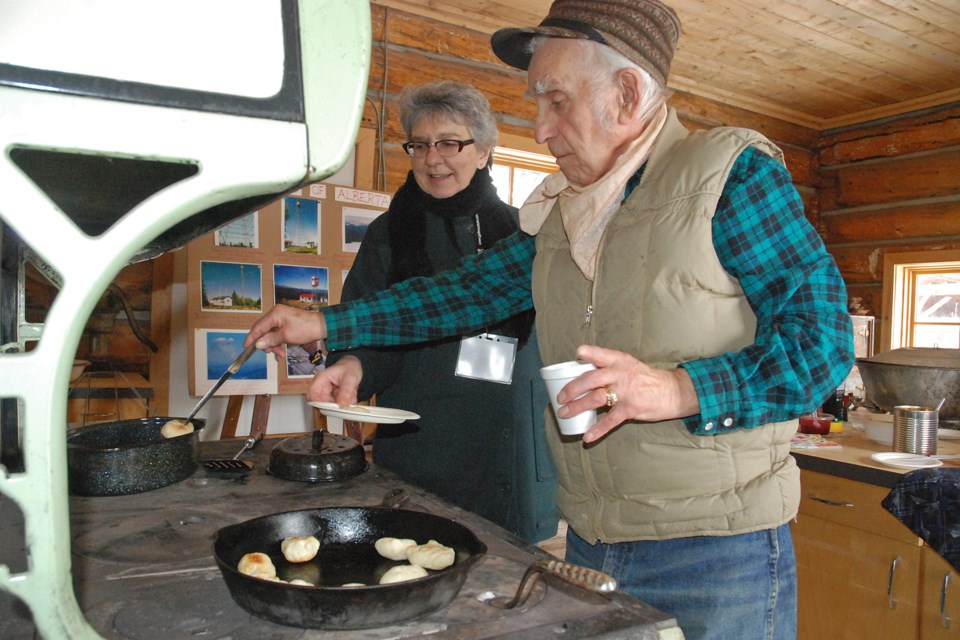 Museum volunteer and cowboy poet Harold Webber cooked up some fried dough balls at the ranger station last year, where Sharon Lazurko was also present to share stories about her experiences as a fire tower lookout. Deb Ellithorpe, not pictured, prepared the mixture of flour, yeast and water, which was served with an assortment of spreads for anyone who was interested in trying some. This year's Winter Fest is scheduled for Sunday, Feb. 16 and Monday, Feb. 17, and is to feature at the Greenwood Community Campground an new Mountain Survivalist contest. File photo/MVP Staff

SUNDRE - A new feature is being introduced to Sundre Winter Fest in the spirit of celebrating pioneer skills that are these days often taken for granted.

Organizers of this year’s Family Day community event for all ages, which takes place the afternoon of Sunday, Feb. 16 and all day Monday, Feb. 17, wanted not only to add something fun for people to watch, but also to pay tribute to local history.

The Mountain Survivalist competition takes place at the Greenwood Community Campground on Feb. 17. It will pit teams of two outdoor aficionados against one another in a race to build a primitive shelter, a fire from scratch without a lighter, and boil water with limited resources in less than an hour, all while being graded by three judges as the clock counts down, said Jon Allan, one of the organizers.

“Sundre Winter Fest is an event of activities and culture and we thought this would be a great way to incorporate both,” said Allan, adding the contest will provide participants an opportunity to demonstrate their outdoor survival skills in a fun yet competitive format.

There will be a maximum of nine teams, with the competition breaking down into three heats of three teams, followed by a championship heat featuring the finalists. In the event of a tie, he said a mystery task will be assigned to determine the champions.

The winners will each receive a custom-made axe forged by the Sundre and District Museum’s blacksmith, David Borys, who is also one of the judges as well as an organizer of the competition.

Also among the other judges, Allan said, is Dave Holder, the lead survival consultant for History Channel’s TV show Alone.

“We encourage everyone to come on out,” he said.

Anyone interested in testing their survival skills with a friend can register by either visiting www.sundrewinterfest.com, which also has more information about the Mountain Survivalist competition’s rules and other Winter Fest activities, or contact Allan at jon.a@sundre.com.

Borys, who got the ball rolling on the competition, said he was inspired by a similar challenge that had once been a part of Winter Fest activities in the past, before his time in Sundre.

He hopes the contest will not only raise awareness about the importance of basic survival skills and outdoor safety -- especially in a place where so many people enjoy venturing out into the backcountry -- but also provide an entertaining way for participants to practise techniques that were once common among the pioneers who settled here.

“It’s useful knowledge,” said Borys, who also wanted to create an opportunity to “bring the community together and celebrate the pioneer spirit.”

Although he did not want to divulge too many details about the resources contestants will be expected to work with to avoid giving anyone an unfair advantage of practising in advance, Borys encouraged those who are interested to check the website to get acquainted with the rules beforehand.

“I don’t want people to have too much insight on what they’ll be supplied with, because I want to see their ingenuity,” he said, adding the competition will require “teamwork and an understanding of how to use resources wisely.”

The contest is developed around a realistic scenario that people could relate to, like driving out for an afternoon excursion in the West Country when the temperature plummets unexpectedly, leaving a vehicle unable to start and a person temporarily stranded and faced with coping against the cold until help can arrive.

“I enjoy hiking and being in the outdoors. And I know a lot of people in the community enjoy that as well.”

Winter, he added, is a great time to learn and practise skills that our ancestors once used on a daily basis.

“The contest is, in my mindset, less about who is the best, and more about having that community spirit and celebrating the way we were,” he said.

“The more we bond as a community, the more opportunities we have to enjoy our relationships with our neighbours, and to give more back to each other.”

Meanwhile, numerous other activities will be taking place at and near the museum, which is granting admission by monetary donations of however much people are willing to offer.

“We will have authentic First Nation’s bannock bread tasting at the historic Red Deer River ranger station,” said Allan, adding there is also going to be artisans and live musical entertainment.

Among the other events lined up are: a wood carving display by the Pioneer Village museum’s main gates; free dance classes at the Move Yourself Dance Studio followed by a performance; free wagon rides courtesy of Darryl McGregor; a farmers' market at the Sundre Elks Hall; as well as several “stunning ice sculptures on display near the community gazebo,” he said.

Winter Fest is the result of a collaborative effort among the Town of Sundre, the Sundre and District Museum, the Sundre Farmer’s Market, and Move Yourself Dance, with sponsorship support from several local businesses and organizations.

“The entire organizing committee has worked hard together to create an experience that’s beneficial to the community,” said Borys, inviting anyone and everyone to attend.