Project had been included in capital planning for number of years
May 4, 2021 3:00 PM By: Simon Ducatel 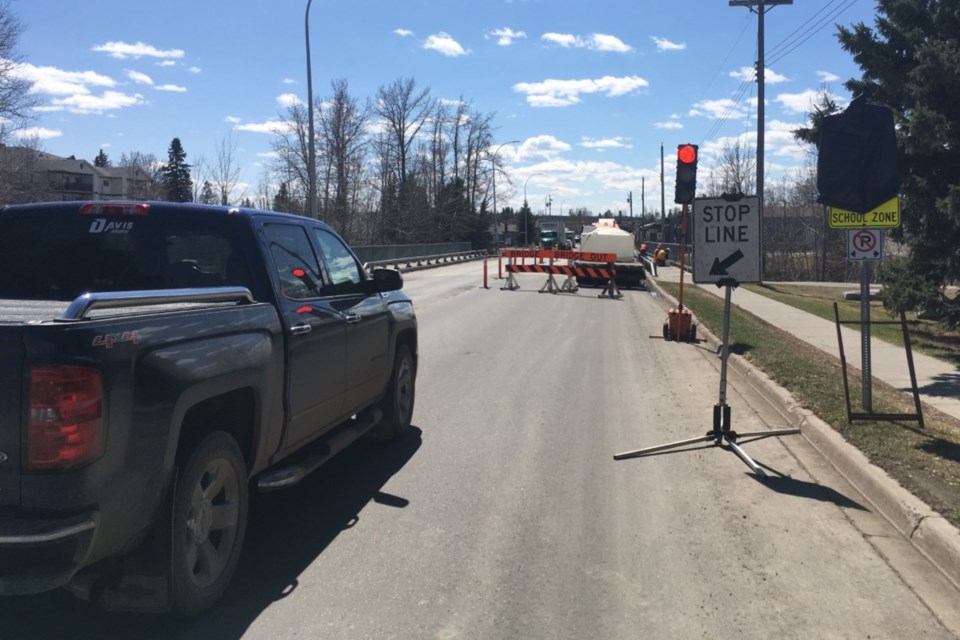 Traffic on the Centre Street Bridge in Sundre has throughout the past week been periodically reduced to one lane while a contractor completed some surface work on sidewalks to improve the deck's integrity and extend the structure's overall longevity. Simon Ducatel/MVP Staff

SUNDRE — Traffic on the Centre Street Bridge has periodically been reduced to one lane throughout the past week while a contractor completed some surface work to improve the deck’s integrity and extend the structure’s overall longevity.

Depending on conditions, the crew was expected to wrap up within about a week, give or take a couple of days, from when they started Monday, April 26, said Jim Hall, the town’s operations manager.

“This is a capital project that we’ve had on the books since about 2015,” said Hall during a phone interview.

In 2015, Hall said such a survey of the bridge, which spans over the Bearberry Creek connecting north and south Sundre, identified superficial surface deficiencies.

“Everything done now helps keep the integrity of the bridge deck up,” he said, adding the work should also help to extend the bridge’s lifespan.

“Having said that, they’re just minor repairs to the concrete on the sidewalk and where the railing posts go in.”

The work, which was being scheduled around school rush hour times, was anticipated to take anywhere from seven to 10 days, he said.

Chris Albert, director of corporate services, confirmed the project had been included in capital plans since about 2015, with an expense of $52,225 to complete the work approved in the 2020 budget.

When the last inspection was carried out, the bridge and its structural integrity was determined to be “in really good shape” with the foundation pillars still standing strong, said Hall.

“That’s what really gets concerning, is if the decking starts to let go, or the piers," he said.

But the minor repairs weren’t related to any such significant issues, and primarily involved sealing up the sidewalks and some of the surface areas.

Additionally, an adjustment bar that helps the bridge fluctuate with the expansion and contraction caused by the seasonal freeze and thaw cycle was broken off by the grader blades a number of years ago and needed to be replaced, he said.

“It is the municipality’s bridge. So, we are responsible if there’s major repairs or anything like that," he said.

The structure’s remaining lifespan, he said when asked, is estimated to last another 20 to 25 years, or some time around 2045.

“We’re shooting for the 25-year mark, and we’ll just adjust it from there,” he said.

Of course any high flows or floods in the years ahead could contribute to accelerating the erosion of the bedding around the pillars and potentially reduce that life expectancy.

Once Alberta Transportation eventually gets around to conducting another inspection after the repairs are completed, the bridge will be re-evaluated to identify any additional required or recommended maintenance, he added.