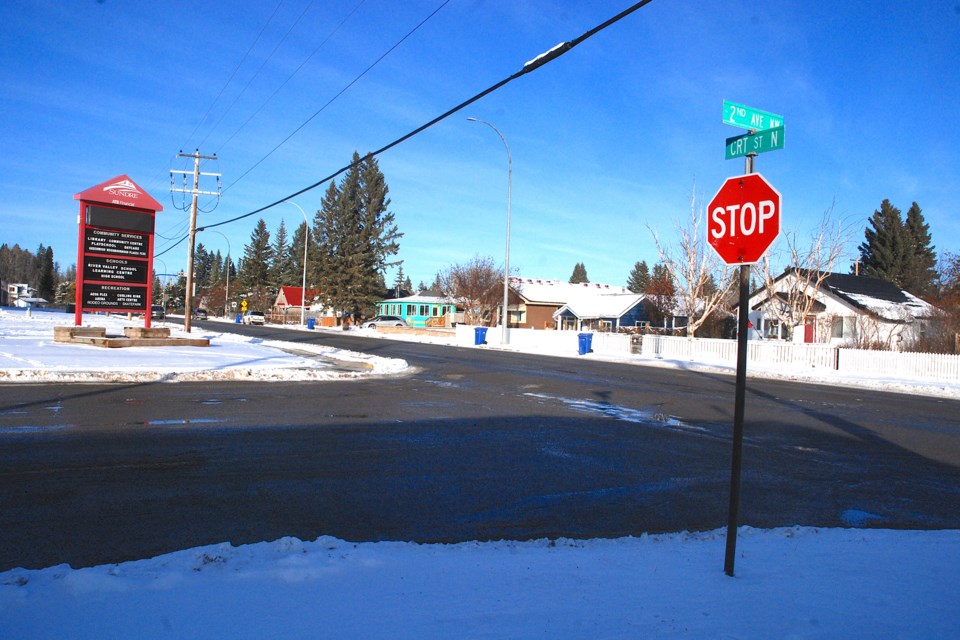 Although the intersection at Centre Street and 2nd Avenue NW near the schools is often clear, the road during peak traffic times when parents and school buses are dropping off or picking up students can become backlogged. Simon Ducatel/MVP Staff

SUNDRE — Plans to install three-way stop signs as part of a pilot to determine whether traffic flow through the school zone might be improved were postponed last week pending additional input.

The municipality had recently issued a press release announcing the imminent intent to place the signs at the intersection of Centre Street and 2nd Avenue NW.

But that approach was prolonged following a discussion during council’s regular Nov. 9 meeting conducted by teleconference.

Providing council with some background, Linda Nelson, chief administrative officer, said school officials were contacted about the proposed pilot and generally supportive of the concept.

But Nelson added they also suggested there should be a greater effort to communicate the plan with parents upfront, and that the school would be receptive to distributing messaging put together by the town. The next step, she continued, would be to bring initial feedback from the school and parents back to council.

Of course the pilot would impact the general public as well, and administration sought a motion from council to either proceed with the effort to solicit more feedback, or to outright abandon the proposed project without seeking additional input from the community, she said.

Should council choose the former and direct administration to pursue studying the issue, that information would be compiled and brought back as a report for further discussion regarding whether to actually proceed with the trial. At this point, the signs will not be installed until late next summer. If the initial trial proves to be successful, the three-way stop would then remain for at least one additional month to allow people to get more accustomed to the layout before being reassessed, she explained.

“If it did prove to work well and did not produce any risks or any other concerns, it could become permanent,” she told council.

“If the trial did not produce positive results, it would of course be removed at that point.”

Coun. Rob Wolfe, who has called Sundre home since 2006, said he has never been a supporter of the proposed pilot.

“To my knowledge, I do not recall any accident or any pedestrian safety concerns at this location,” said Wolfe.

Coun. Todd Dalke said he understood his colleague’s perspective. However, since moving to town nine years ago, Dalke said he’s heard a lot through conversations with people — even more so since being elected to council — about issues pertaining to that intersection.

“There is frustrations on that roadway from both residents and users,” he said.

“The idea of the three-way was brought forward several years ago. Right now, it is just in the investigation phase.”

That means engaging in conversations with all affected stakeholders, from the school and police to parents and the public, he said, expressing the opinion that pulling the plug now would be premature.

“Our job, of council, is to take those requests of those residents over the years and to take them seriously. We’re not spending a whole whack of money on it, but we do need to take these (issues) seriously,” he said.

Council, he argued, should finish the initial investigation to find out the depth of the matter before deciding one way or another.

“I wasn’t supportive of (the pilot) either, but I do want to make sure we listen to the residents.”

Wolfe suggested if the concerns stem largely around peak times during morning student drop off and the after school pickup, that a patrol presence could suffice.

But Dalke countered that the concerns do not stem only from the peak traffic times, citing other after-hour issues such as excessive speeds and the loud roar of revving motors.

“There’s a whole bunch of aspects to it — it’s not just the time of picking up the kids,” he said.

Coun. Richard Warnock agreed council has a responsibility to investigate issues raised by the community, and that scrapping the pilot now would not provide an opportunity to obtain additional input. Warnock added he isn’t certain the three-way stop is the right way to go, but said due process should be followed.

Coun. Paul Isaac recommended first and foremost reaching out to the local RCMP detachment before approaching the public.

“I mean, that’s kind of their jurisdiction as to how they view this, because I haven’t heard anything from them,” said Isaac.

“I think that would be an important piece of the puzzle,” he said.

Coun. Charlene Preston said she supports the process. The councillor added that the past few weeks since school started likely does not reflect the average traffic flow from past years because of the pandemic.

“The numbers at the school are not at maximum,” she said, adding a clearer picture will come into focus as restrictions are eventually lifted.

Mayor Terry Leslie spoke in favour of pursuing the process and having feedback from the community brought before council.

“Certainly if the RCMP have information about accidents or near misses or complaints or concerns about the safety of this particular intersection, then we should have that information,” Leslie added.

“If there have been any requests for a three-way stop, who have they come from — where does this idea come from?”

The mayor suggested council discuss the matter further during the next meeting, when initial input might be available.

“That would give a sense to administration and council about the support to move forward, or not.”

Restrictions in Sundre expected to impact bottom line, morale
Nov 19, 2020 5:00 PM
Comments
We welcome your feedback and encourage you to share your thoughts. We ask that you be respectful of others and their points of view, refrain from personal attacks and stay on topic. To learn about our commenting policies and how we moderate, please read our Community Guidelines.