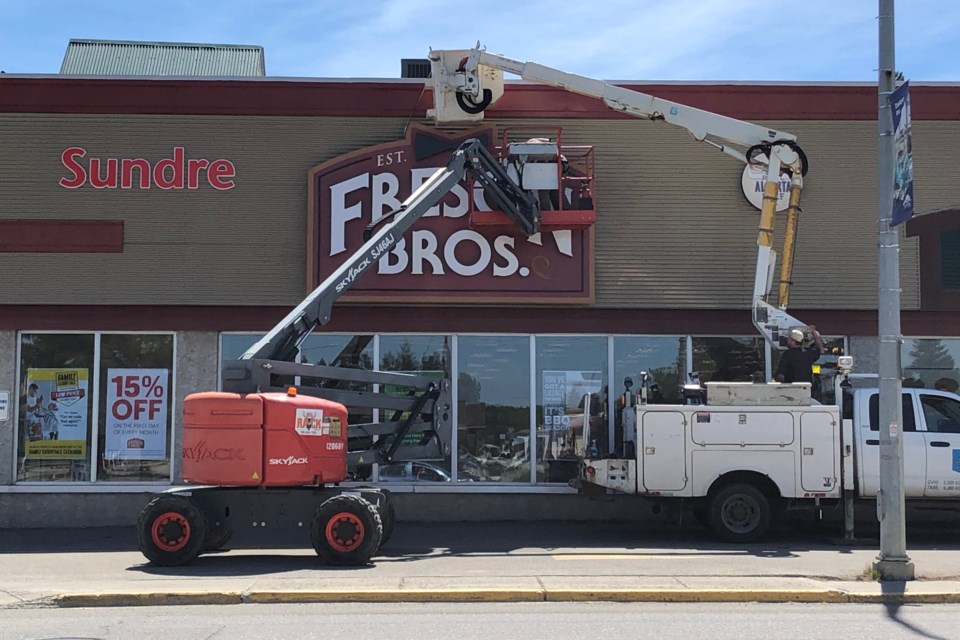 SUNDRE — The past owner and manager of the former Sundre IGA has following more than three decades of working there decided to shift gears and focus on new priorities.

“It’s been 35 years that I’ve been at the store full-time. So, it’s time for a change,” said Marty Mennear.

On Tuesday, June 1, the only local grocery store — which was built in the late 1970s by his father Tom Mennear and Bill Scott, who helped finance the project — officially came under new management with a company called Freson Bros.

The transition seemed to be a fairly smooth process that did not require closing the store, with existing staff retained along with some new faces, and the new sign installed without delay.

Mennear said the decision was not easy, but reiterated that after so many years, the time had come to turn over a new leaf.

In the early 1980s when he was a student at a Calgary high school, Mennear said he would spend his summers working at the store, and started on full-time pretty well right after graduating in 1985.

“I’m trying to find something else that’s exciting and then kind of move on with life,” he told The Albertan on Friday, June 4.

However, he has no intention of hanging up his hat in retirement or running off into the sunset.

“I’m taking a break. And then after that break, I’m going to find another business venture to get into,” he said.

Plus, Mennear added that he retained ownership in the shopping centre the grocery store is located in, as well as the nearby ACE Hardware that shares the same parking lot.

However, the time was past due to “just enjoy life a little bit,” and Mennear said he looks forward to spending some time with his wife, Elizabeth, and occasionally doing a bit of camping.

“All these 35 years, I’ve never taken any time off from the summer — it’s always been too busy for us,” he said.

And the past year of coping with COVID-19 public health protocols created an additional burden of stress, he said.

“The pandemic helped it out,” he said with a little chuckle when asked whether the health crisis played a part in prompting his decision.

“It’s been a real struggle at times over the last year and two, three months. It’s not the same business that it was before then,” he said, referring to the additional sanitation requirements and public health measures like masks to ensure the safety of staff and patrons.

But he also expressed gratitude to all of the loyal customers who came through the doors over the years.

“I just want to thank the community more than anything for all the years of their support and keeping everybody at Sundre IGA working,” he said.

“There’s a lot of good people in this community, and I’m going to miss seeing them on a daily basis.”

Cam Bowman, the Freson Bros. Sundre store manager, grew up in Sundre and has family ties to the region, including parents who call the Eagle Hill area home.

Although Bowman could not immediately be reached for comment prior to press deadline, he wrote in an ad placed in last week’s Albertan that he never anticipated having the opportunity to come back, and looks forward to welcoming members of the community as well as visitors who recreate nearby.