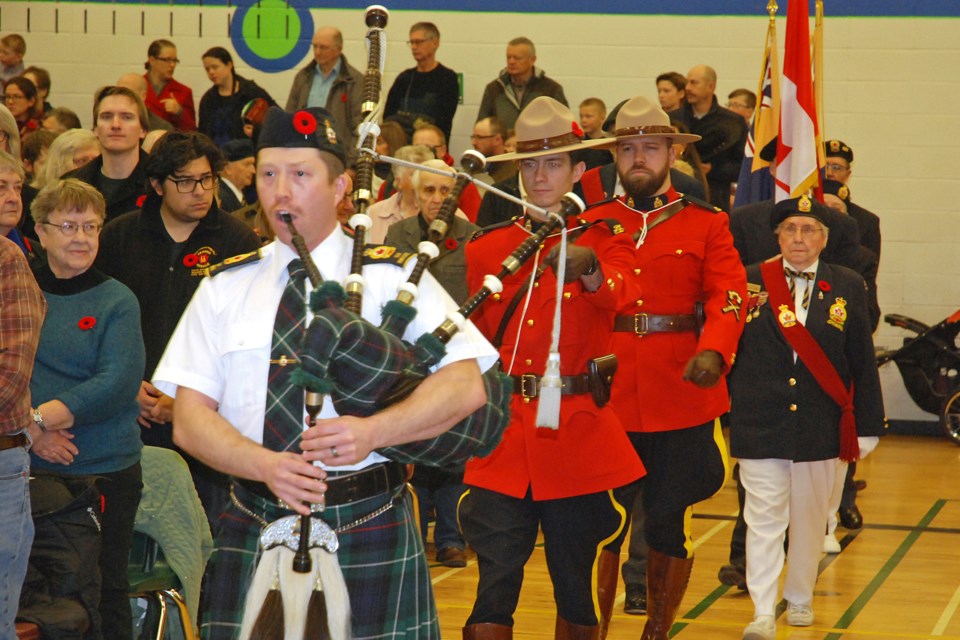 The Royal Canadian Legion Sundre Branch #223 has for the past two years conducted the community Remembrance Day ceremony at River Valley School. Because of the COVID-19 pandemic, there won't be a public service this year. File photo/MVP Staff

SUNDRE — Although there will be no community Remembrance Day service this year, the local legion will host a closed ceremony and officials encourage the public to observe a minute of silence.

“We’re planning to do a very private ceremony amongst the legion members themselves honouring those members of our community that have made the ultimate sacrifice,” said Royal Canadian Legion Sundre Branch #223 president Christina Ferguson.

“But we are not asking any of the public to attend because of COVID,” Ferguson said earlier this month during a phone interview.

Although last year’s public service was for the second time held at River Valley School, she said that was not an option this year. Prior to that, ceremonies at the legion’s hall typically drew out large crowds beyond seating capacity.

Since indoor gatherings are restricted to 50 people, which would include legion members and volunteers, along with other protocols such as maintaining the physical distance requirement of two metres and wearing face coverings, she said proceeding with a public service was deemed unfeasible.

“We just don’t think it’s practical to have.”

Asked whether perhaps a virtual ceremony might be arranged, she said, “The majority of our group is over 70, and virtual is not something that I have ever done, or would know to do.”

And planning for an outdoor ceremony at the Veterans’ Homecoming Park’s cenotaph at the intersection of Highways 27 and 760 is too unpredictable, she added.

“Because we don’t know what the weather is going to be like, we’re not going to have it at the cenotaph. It may be a beautiful day and we could have it there. But if the temperatures are below freezing, then the majority of our members probably wouldn’t be able to stand out there and take the cold for that length of time.”

However, the legion nevertheless encourages residents to observe a minute of silence at 11 a.m. on Nov. 11, and is planning an approach that will still enable people to pay tribute to Canada’s veterans and fallen.

“What we will do is put a wreath out at the cenotaph so that anybody that has a poppy and would like to place it on the wreath in remembrance of those that have lost their lives…(can) pay their respects,” said Ferguson, adding that approach will also address the matter of physical distancing.

The wreath will be laid at 10 a.m., she later confirmed.

Annual business awards night cancelled
Oct 23, 2020 6:00 AM
How Sundre's hospital became the Myron Thompson Health Centre
Oct 22, 2020 5:00 PM
Comments
We welcome your feedback and encourage you to share your thoughts. We ask that you be respectful of others and their points of view, refrain from personal attacks and stay on topic. To learn about our commenting policies and how we moderate, please read our Community Guidelines.