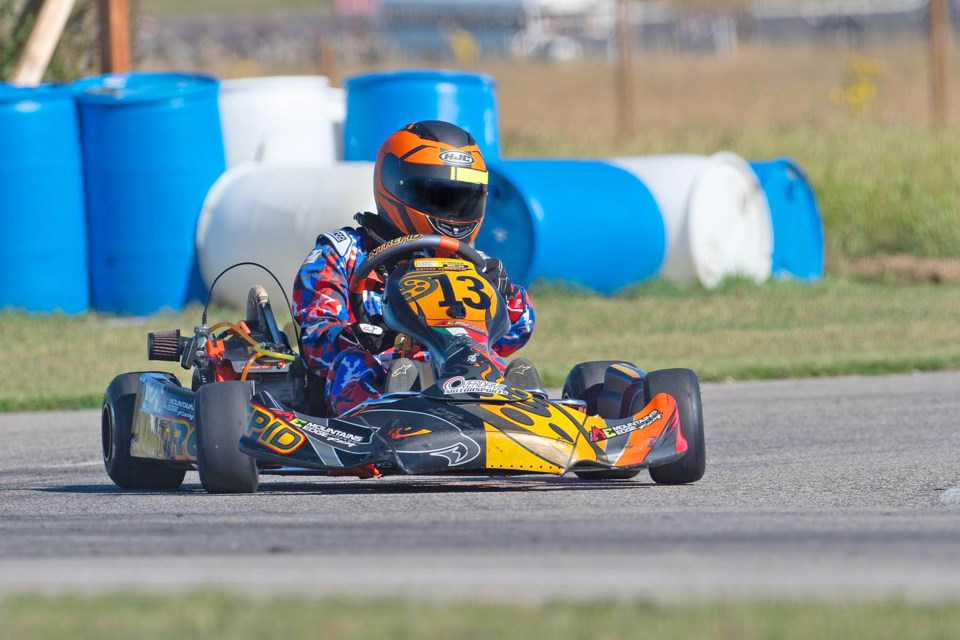 SUNDRE - A Sundre teenager quickly developed a keen affinity for racing after spending a brief period of time trying out a kart, and has since continued to progress.

About two years ago, Carter Gibson was first introduced to the sport during an event that offered an opportunity to suit up and race a kart around a track in Strathmore.

The 14-year-old Sundre High School Grade 9 student, said a half an hour was all it took to get him hooked.

“I loved it,” he said recently during a phone interview.

Before long, his parents, Jenn Cheung and Don Gibson, made arrangements to acquire a brand new kart, and he joined the Calgary Kart Racing Club (CKRC). Having his own set of wheels enabled him to practise more frequently, building up experience and paving the way for substantial progression.

Gibson was named Most Improved Junior Driver of the Year and presented with an award during a CKRC banquet held on Nov. 9 at the Calgary Golf and Country Club, said Cheung, who teaches Grade 6 at River Valley School.

While Gibson mainly races in Strathmore, he occasionally hits a track south of Edmonton in Warburg as well, she said, adding he made the podium in third place twice this past season.

But there was a learning curve along the way.

“It was a lot harder than I expected to get up to race speeds,” said Gibson.

Depending on turns and straight portions of track, he said the karts can reach speeds of roughly 60 to more than 80 kilometres per hour. He added they can feel especially fast because of their low proximity to the ground.

At first, the teenager said he had never felt so out of place.

“We didn’t know what we were doing off the bat,” he said, adding it was a matter of figuring things out along the way.

But the adrenalin rush, the thrill of the race, and the need for speed kept him coming back for more. So did the new connections he was making.

“The people there are really nice,” he said.

Additionally, he expressed an enthusiasm for testing his limits and pushing past them.

“I like challenging myself, see how fast I can get.”

Racing is a sport, like hockey — Gibson played with the Sundre Minor Hockey Association’s bantam squad — and while he enjoys both, he said he especially enjoys the individual aspect of racing and an easier going atmosphere.

“In hockey, there’s a lot of politics,” he said.

“And in racing, everybody just kind of goes with the flow.”

Although reaching a higher professional level of racing as a full-time future career is “kind of one in a million,” Gibson nevertheless intends to continue pursuing his passion as far as he can.

Donning lucky number 13, Cheung said Gibson races in the Junior Briggs class — named after the Briggs and Stratton engine — based on his age and weight.

In the coming year, he hopes to obtain a Shifter kart, which boasts a two stroke, 125cc engine, she said, adding the Shifter class — reaching speeds of approximately 120 kilometres per hour on the main stretch — is the fastest in the CKRC.

Since that class is for 16 year olds, getting one sooner will give him a chance to practise and prepare for the next level, she said.

Cheung said the CKRC, which has more than 230 members, has grown to become among the largest in the country. Originally based in Calgary, the club has since relocated to Strathmore.

“We joined it in 2017,” she said, referring to the try-a-kart event that initially introduced Gibson to the sport.

In that relatively short time span, he has progressed leaps and bounds, she said, praising his two, third-place podium finishes up against more experienced racers who have been at it for many years.

“He’s very humble,” she said when asked how she would describe her son.

She also called him an “awesome kid” who tends to be on the quiet side and does well in school. Kart racing, she added, has also really boosted his confidence.

The family originally hails from Toronto but relocated to Cochrane before eventually building their home and setting roots just east of Sundre along River Road in 2000.

“We just love it out here; it is beautiful,” she said.