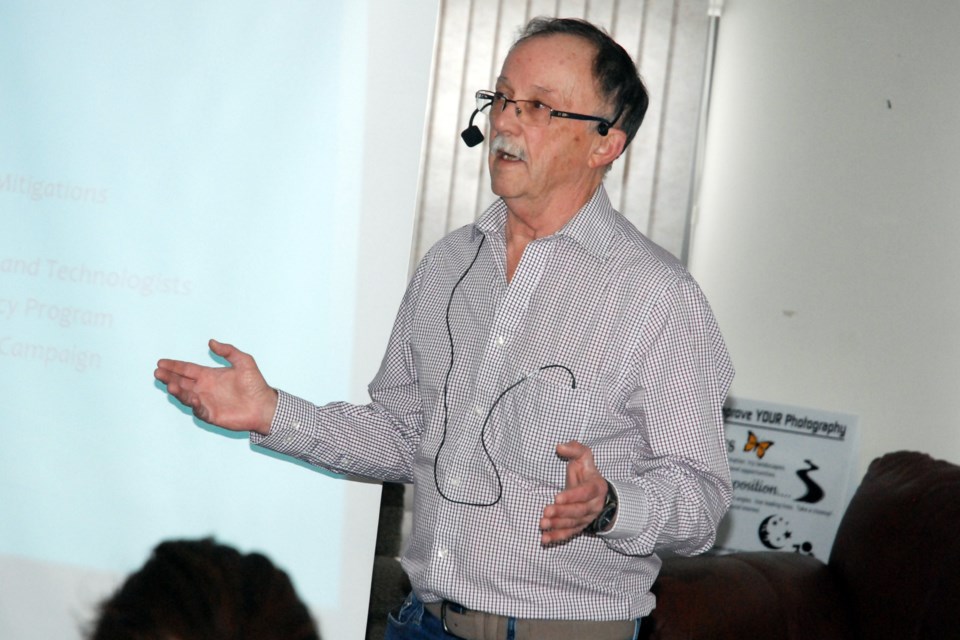 John Horning, a member of the Canadian Association of Radon Scientists and Technologists, spoke to approximately 20 people at the Sundre Municipal Library on Saturday, Feb. 1 about radon gas. Simon Ducatel/MVP Staff
SUNDRE - Although radon was discovered more than a century ago, the potential problem of the radioactive gas accumulating in homes was not identified as a public health concern until the 1980s.

And while over the past few decades there have been efforts to raise awareness, there are those who remain unaware about the possibility of exposure to the invisible, odourless and tasteless element that is produced naturally as a result of decay of uranium in soil and rock.

Following up on a feature about the subject published last fall in the Sundre Round Up, the Sundre Municipal Library’s manager made arrangements to host a public presentation on Saturday, Feb. 1.

The scheduled speaker was John Horning, an earth scientist and member of the Canadian Association of Radon Scientists and Technologists, as well as a contractor who installs mitigation systems that essentially safely ventilate the gas outdoors where it quickly dilutes and becomes harmless.

Horning hoped the main takeaway was for people to seriously consider testing their homes for the gas.

“There’s radon everywhere, Alberta is no different,” he said last week during a phone interview while preparing this weekend’s presentation.

Certain parts of Alberta face a potentially heightened risk simply because of the geology, with porous gravel ground doing little to impede the rise of radon gas from the earth. Horning said the more gravel there is in under the soil, the more likely radon could be an issue with limits that exceed Health Canada’s baseline of 200 becquerels.

Since the Round Up’s story ran a few months ago, Horning said he has conducted several tests in town, all reading over the federal government’s recommended maximum levels, sometimes even triple to quadruple.

“I’ve seen large numbers in Sundre. Not outrageous, but large. I see them consistently and without exception,” he said.

Further testing will provide additional data that will paint a more accurate picture, he said. Horning is primarily motivated to raise awareness and said people can conduct their own tests.

“They don’t have to test through me,” he said.

The Sundre library now has a couple of testers that can be loaned out free of charge with a membership, others are available through Health Canada as well as the Canadian Lung Association, with another option to simply purchase a radon test kit, which can cost upwards in the range of $200.

“The Lung Association is a great resource,” he said.

“On their website, they talk about the various testers that are available.”

Horning said another takeaway is for people to discuss the issue with family, friends and neighbours, and to even consider volunteering as regional or local champions to lead community efforts to test for radon in the on-going effort to accumulate as much data as possible to get a clearer understanding of the scale of the issue.

“Radon could be more serious than we think. It’s in every home,” he said.

The question comes down to how much of the gas is actually accumulating in a building. The best times to test a home is generally between October and April, when windows are closed and basements are all but sealed up for several months, Horning said.

“Put your name on the list for a tester.”

Although he does not want to cause alarm, Horning said the issue should be taken seriously.

He said high readings from a radon test do not mean that a home is tainted, but mitigation systems that ventilate the gas directly outside provide a simply remedy that can put a person’s mind at ease.

Long-term exposure presents a greater risk to children, and radon is the second highest cause of lung cancer deaths worldwide. In Canada, approximately 3,300 deaths every year — about 16 per cent of all lung cancer deaths — are radon related and preventable, he said.

Horning also encourages people to contact their MLA about improving the government’s role in protecting children. Bill 209, the Radon Awareness and Testing Act, which outlines a legal framework for mandatory testing in, for example, daycare centres, had received bipartisan support under the previous government. But the document has since sat on a shelf, awaiting royal assent that may never come. The Alberta government has said efforts to monitor the situation continue and that voluntary testing is adequate.

“We can’t have a sleepy government on this.”