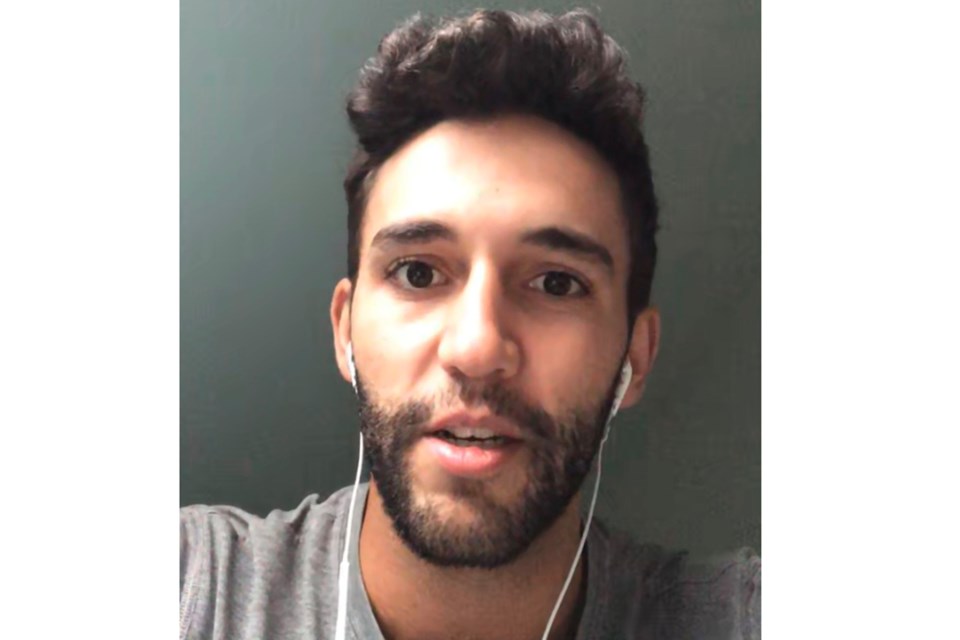 Former Sundre Minor Hockey Association player Adam Beukeboom, who is now in Germany preparing to play his third season in a row in Europe, took a few minutes recently to speak with The Albertan about his experience. FaceTime screen capture

SUNDRE — A local hockey player is for the third season in a row pursuing his career playing in Europe.

Arriving in Germany near the end of September, Adam Beukeboom — who previously played in Iceland and Serbia — said he was initially uncertain whether he’d even get a chance to play because of the COVID-19 pandemic.

“I was kind of fully expecting there to be no jobs, because as one league shuts down, all of a sudden there’s a trickledown from all of the other leagues, and there’s that many less jobs,” Beukeboom said during an interview conducted over FaceTime on Oct. 7.

“But this came across the table, and I was pretty excited,” he said.

Playing for a team called the Tigers in the Regionalliga North — the fourth league down from the top league in Germany known as Deutsche Eishockey Liga — Beukeboom will for the following months be calling Harsefeld home.

Located about 45-kilometres southwest of Hamburg, the town has a population of about 12,500.

There are including the Tigers eight teams in the league, which under pre-pandemic timelines would be starting its season this month. However, official gameplay isn’t expected to be underway until early November he said.

“We will play each team four times,” he said, adding that will add up to 28 games in total.

However, he said there won’t be any playoffs this season.

“So, it’s just winner of the league takes all," he said.

When he spoke with The Albertan, practices had just barely begun.

“Right now, the ice isn’t in in Harsefeld here yet, so we have to go in Hamburg to play," he said.

Having just one practice under their belt as of the time of the interview, he said, acknowledging how early in the season it still was, that the team seemed to be shaping up.

Whether he’ll be able to come home to Sundre for the holiday break — when he in the past has gotten involved in a goaltending clinic for minor hockey — will largely hinge on what pandemic regulations remain in place.

“We’ll see. A lot of it will depend on COVID, because if I have to come back and quarantine for two weeks, and I’m only there for two weeks, it doesn’t really make a whole lot of sense,” he said.

“And yet, you know, I think Germany at Christmastime is not a bad place to be!” he added with a laugh.

Asked whether there were any signs of winter, he said, “Apparently, it hasn’t really snowed here for five years. But it’s been raining quite a bit the last few days, so winter has arrived I think. Or at least a chilly fall.”

Along the way, Beukeboom hopes to add some German to his vocabulary.

“The last couple places, the language was a little tough. But I think this year I might actually be able to get a handle on it,” he said. “I’m learning, I’m slowly getting there.”

Travelling to Germany during the ongoing pandemic was a bit different than when he returned from Serbia early after the last season was cut short.

“We just know a little bit more how to go about navigating the rules of this virus better,” he said. "When I came home, they didn’t have masks in place. You were just kind of told to keep to yourself and wash your hands lots. But masks weren’t a thing coming home."

“And then on the way here, obviously masks were the big thing. You had to have them on at all times. I think I wore a mask for 28 hours straight,” he added, chuckling.

But breathing during that lengthy span of time while wearing a mask “was never an issue. If the nurses and doctors can do it for entire day shifts, I’m sure we can manage one trip on a plane.”

While his focus will primarily revolve around peek performance on the ice, Beukeboom also looks forward to — as regulations allow — taking in some sights, and undoubtedly imbibing a few lagers and brews as well.

“There’s no shortage of that!” he said, laughing. “It’s easy to find beer in Germany. Anywhere in Europe you are, all the beer is good — it’s hard to find a bad beer. Whereas in Canada, you can find a bad beer if you look.”

At some point during his stay, he also wants to visit the Holocaust Memorial.

“I think any time we get a chance to go and see some of that stuff, it would be crazy not to go and check it out,” he said.

Somber as such subjects might be, he said it’s important to remember the past.

Beukeboom expressed optimism that this season could yield even greater opportunities in the future.

“For me, it’s an exciting year, because I think it’s the first time being in a real hockey country in Europe," he said.

"It has the potential to maybe open some doors that weren’t quite available the last couple of years. Obviously I want to have a good year anyways. I always go out and play my hardest regardless.

“Worst case, I get to learn some German and enjoy my time.”