Sundre curlers Parker Konschuh and his sister Rebecca are both enjoying a great deal of success these days ñ and they both say the support of their parents and Sundre Curling Club members has been key to their winning ways.
Jan 25, 2011 12:00 AM By: Dan Singleton 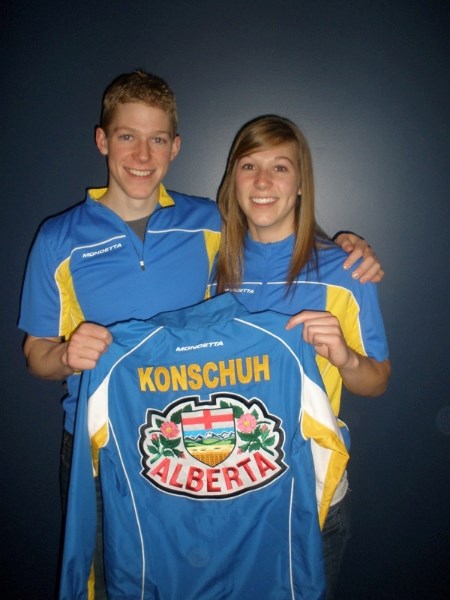 Sundre curlers Parker Konschuh and his sister Rebecca are both enjoying a great deal of success these days ñ and they both say the support of their parents and Sundre Curling Club members has been key to their winning ways.

Parker, 19, a member of the 2011 Alberta Junior Boys champion curling team, says the teaching of his longtime former coach Ed Lengyel has made him the curler he is today.

ìI probably wouldn't have an opportunity to play on this team, at this level, if it wasn't for everything Ed has taught me over the years,î said Parker. ìThe door was always open to us at the Sundre Curling Club, letting us get in lots of practice when we needed it. Everyone at the club has always been very supportive.î

Parker and his teammates Derek Clark, Michael Ing and Colin Hodgson won a seat at the nationals by winning provincials in Edmonton last week.

The nationals will be played at the Calgary Glencoe Club and the North Hill Club from Jan. 29 to Feb. 6.

ìIt's pretty cool to be going to nationals and something I've been working towards for a long time, since I've started curling,î he said.

Having started his curling career at the Sundre Curling Club at age eight, Parker has now reached his highest-ever level of success in curling.

As well as Lengyel, Parker also credits his team's current coach, Stan Usselman, for his success.

ìHe's been working a lot and making sure we stick together as a team,î he said. ìIt's absolutely a team sport. If we play well, I think we will do all right.

ìI think we have a chance of winning it all. We've been really busy and training a lot and getting better all season. A lot of it is timing.î

As a past member of Sundre juvenile and junior teams Parker faced off numerous times against Clark, Ing and Hodgson.

ìWe were always pretty big rivals in the past and we decided to put a team together this year and it's great,î he said.

The team will be ìgetting in plenty of practisingî over the next couple of weeks in preparation for the nationals, he said.

Parker is currently in his second year studying kinesiology at the University of Alberta. He says he may go into dentistry when he finishes his current degree.

Parker's sister Becca is also an accomplished curler, having competed in the recent provincial championships in Edmonton as part of the Jocelyn Peterman rink from Red Deer.

Although the team didn't make it to nationals ñ they finished second to Calgary's Nadine Chyz ñ they did secure a spot at the Canada Winter Games in February, where they will represent Alberta.

For her part, Rebecca, 17, says the support of her parents has been a big part of her success so far. ìDefinitely my parents and my family supporting me has been a big help,î she said. ìThey have been a really big help and always make me go for my goals. They both have done some league curling.î

Parker has ìdefinitely been a big helpî, as has Sundre's Dale Phillips and other members of the Sundre Curling Club, she said.

Her current coach, Nancy McInerney, and former coach Jay Anderson have been very helpful in teaching her the fine points of curling, she said.

Becca has been curling competitively for seven years; reaching the provincial finals and the Winter Games is the highest she has made it in her curling career.

The players on her current team are Jocelyn Peterman, Brittney Tran and Christine Anderson.

ìWe've been practising a lot as a team lately, doing as much as we can,î she said.

As for the upcoming Winter Games, Becca says the team is confident they will do well.

ìWe are hoping to go for gold and we think we have a pretty good shot,î she said.

Parker says he is proud of Rebecca's success and is pulling for her to do well at the Winter Games.

ìI don't know if it's a rivalry; it's more like we support each other. She gives me pointers and I try to do the same for her. She usually kicks my butt when we play,î he said.