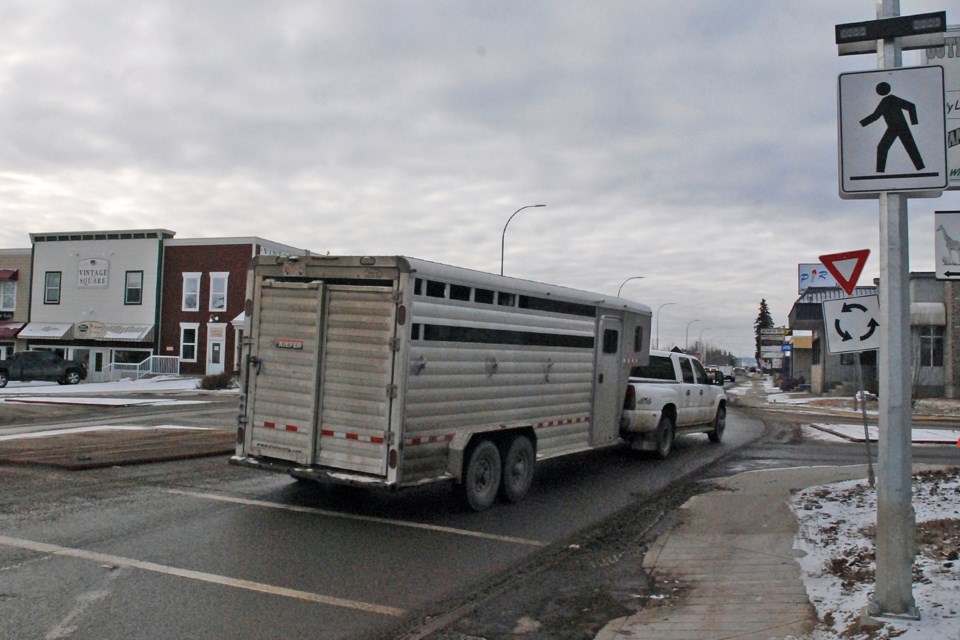 Although Alberta Transportation plans to later this summer remove and replace sections of degraded asphalt on the Highway 27 high load corridor through Sundre, the repairs are not part of recently announced infrastructure funding outlined in Alberta's Recovery Plan. The overlay project is not expected to happen in the immediate future. File photo/MVP Staff

SUNDRE — With hundreds of millions of dollars for major infrastructure projects included in Alberta’s Recovery Plan, the municipality’s mayor hopes some of those funds will flow into local priorities.

Among them is the wastewater treatment facility that requires substantial upgrades not only to increase capacity but also to be in compliance with updated Alberta Environment regulations.

“We haven’t received any word yet about how we might fit in,” said Terry Leslie last month.

Nelson said the municipality remains in contact with the minister, but that it’s a little premature to confirm any announcements of funding allocations.

The minister, added the mayor, has also been “quite diligently trying to get a meeting for us with the transportation minister” to get a better understanding of where Alberta Transportation’s Highway 27 overlay project through Sundre’s Main Avenue corridor stands.

“From the town’s point of view, we’re ready to go,” said Leslie.

“We’ve done our due diligence,” he said.

Upgrades to underground infrastructure previously believed to be required were more recently deemed unnecessary, and repaving the road could proceed, pending approval from the provincial department responsible for highways, he added.

“Alberta Transportation has their list of priorities, and we’ve been advocating very strongly that we want to be high on their list because of the transportation issues for the town as a whole,” he said, pointing out that Sundre’s corridor accommodates more than eight million vehicles a year.

“We recognize that there are limited funds that the province has, and they certainly have some priorities that they want to target. We’re pushing as hard as we can just to make sure that we are on the list of those priorities if there are funds that are being released.”

The UCP’s economic recovery plan also cut corporate taxes to eight per cent from 10 per cent, following previous cuts from the NDP era’s 12 per cent.

Asked if no-strings attached tax breaks should perhaps instead be replaced with tax incentives requiring corporations to present investment and hiring plans before qualifying for relief, he said, “the province and the federal government have their research, their rational and their reasons for wanting to provide those kinds of incentives for big business.”

He said predicting whether such policies will pay off in the long run is difficult.

“I’m still optimistic and waiting and hoping that some of our corporate businesses are going to be able to take advantage through these very difficult times,” he said.

“If you have ideas to incentivize businesses, it’s business that decides whether, and how, that’s going to be used. The idea is job creation, and whether that materializes or not is yet to be seen.”

Incentive programs that would require an application process would be a burdensome bureaucratic endeavour, which the mayor said he does not favour.

“I don’t want bureaucrats elsewhere making decisions about what’s in Sundre’s best interests. I would advocate for a no-strings attached amount to be given,” he said, suggesting such an approach would facilitate efforts to complete major infrastructure projects, including other major priorities like broadband internet.

“All levels of government are trying not to hold back and do nothing. I think they’re trying to provide incentives and bring back that positive attitude that we all need for investment and innovation and to start new businesses and to move forward.”

While setting provincial or federal tax rates or incentive programs are of course far beyond the purview of a municipality, Leslie said the town supports initiatives offered by other levels of government “because we’re all trying to work together to stimulate and support an economy that requires three levels of government all working together.”

From the municipality’s point of view, council already held the line on taxes this year for residents and businesses, he said.

“Those are things that we can control.”

Alberta Transportation spokesperson Anna Neale wrote in an email that the department will later this summer “be completing interim pavement repairs on the roundabouts.

“The repairs will involve removing large sections of damaged pavement and replacement with new asphalt,” she said.

“This work is not part of the recently announced bundle of stimulus projects. Other improvements to Highway 27 are considered future work at this time — they are not on the current provincial construction program.”