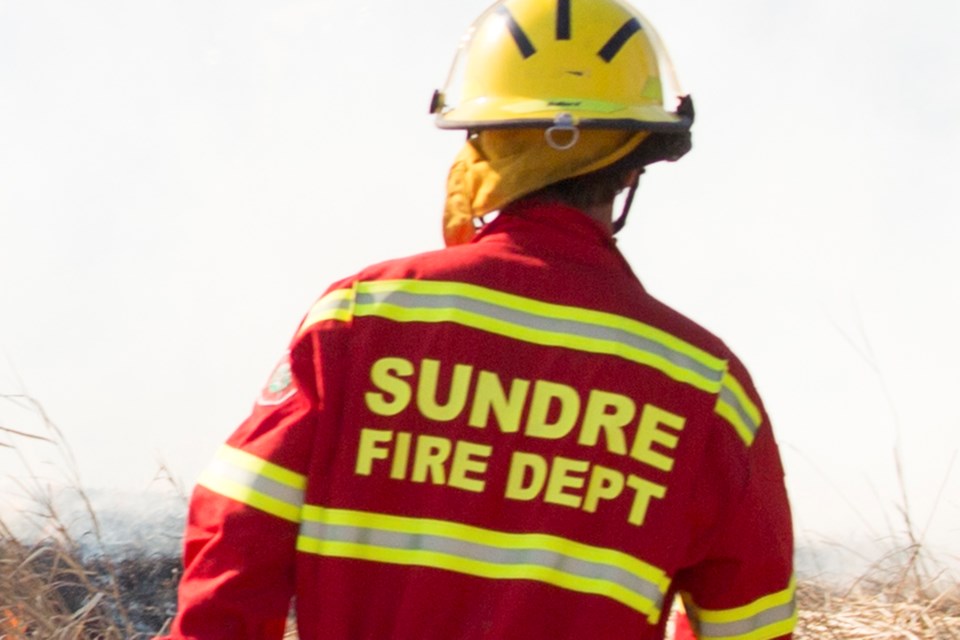 The roles and responsibilities involved in the fire chief position have over the past number of years changed substantially, says a council statement. File photo/MVP Staff

SUNDRE — A number of factors, led largely by legislative updates and modernized workplace requirements, prompted the municipality to begin looking into a full-time fire chief position many years ago.

“There were continuing expectations that were too much for a volunteer, even at that time,” reads part of a council statement submitted to The Albertan this month in response to questions.

At the time the Sundre Fire Department’s former leader was appointed, the chief already “had a full-time job, and was unable to commit to more than volunteer hours, which prompted discussions on the viability of continuing to provide this service through the limited hours originally anticipated.”

Additionally, the roles and responsibilities involved in the position have over the past number of years changed substantially. Among the position’s expectations are being not only familiar, but also complying with and understanding the consequences of new legislation, as well as other laws that municipalities must abide by, the statement explains.

“This includes amended laws such as Alberta’s updated Occupational Health and Safety legislation, where, for example, harassment and violence are now defined as workplace hazards and include mandatory investigations and inspections by provincial health and safety officers if a violation occurs.”

Furthermore, a comprehensive understanding of human rights legislation — which include mandatory investigations and even tribunal hearings for violations — is also required, along with familiarity regarding numerous recent changes to the Municipal Government Act, a provincial piece of legislation that grants powers to municipalities to govern, raise revenue and plan for development, and has resulted in mandatory changes to multiple municipal bylaws and policies.

Additionally, the reporting responsibilities that are required under the town’s quality management plan — which is an agreement between the Town of Sundre and the minister of Municipal Affairs, through the Safety Codes Council — require continuous attention.

That process is key to the Safety Codes System since the quality management plan includes an outline of policies and standards that must be followed to assure compliance. That involves tasks such as determining the number of inspections and at what stages, the plans review process if applicable, guidelines around verification of compliance or resolution of non-compliance, and requirements for issuing variances and orders. Failure to comply with those standards, to which accredited organizations are audited, could result in the municipality losing its accreditation for the fire discipline.

“In addition to these responsibilities, the fire department is a department of the town, and has the same every day legislated accountabilities as all other town departments,” it reads.

“The responsibilities of this position far exceed the capacity and expectations that a volunteer position can provide.”

Previously, the fire chief position was appointed — and considered as — a volunteer position paid by honorarium.

“It was not considered a part-time position, and there were no set hours.”

Above and beyond the responsibilities specifically expected of the fire chief role, the person in that position was also required to work in tandem with the town, and was to attend at least one weekly meeting that would typically last about an hour.

“As this position was considered to be volunteer in nature, many of the obligations that are typically expected of a town department supervisor resulted in these responsibilities being covered by other town staff in other departments.”

A statement previously issued by the municipality late in February mentioned that the cost of a full-time position was anticipated to “be offset through savings in areas such as in-house training.”

Asked where training was conducted before and whether the weekly sessions at the fire hall were considered a part of that, or how they differ, council’s statement to The Albertan confirmed the department’s members train every Wednesday night with the fire training officer.

“However, the training will now include formal training,” the statement reads, adding that includes baseline qualifications that both professional and volunteer members should have prior to responding to structure fires, such as National Fire Protection Association 1001 Level 1.

Sundre’s department will also endeavour to capitalize on opportunities to coordinate training efforts with neighbouring fire departments, a process that council says not only saves costs, “but more importantly, provides mentorship and camaraderie.”

That’s a process that began under the direction of former acting Fire Chief Alex Clews, and will continue with the recently appointed full-time chief, Ross Clews.

Responding to a request for response to residents who have questioned the justification of a full-time fire chief position in a small town like Sundre, council’s statement reads, “This position will be a great asset to the protection of the community, and the future direction of the department. The Town has a responsibility to provide fire protection to the citizens of Sundre. Additionally, the town also provides fire services to the citizens of Mountain View County through a shared services agreement, which accounts for more than 50 per cent of the fire call response.”

The public statement released in February also indicated the fire department’s budget line changed by $35,000. Asked whether the municipality had considered requesting additional funding from the county, where the majority of responses are located, council said, “The Town has been in negotiations for increased funding with Mountain View County, based on the fact that most of the fire calls are in Mountain View County.”

Offering some statistics, council said there were 34 fire-related calls logged by the department in January, of which 25 were responses in the county.

“Although there is an increase of $35,000 to the fire budget, it does not mean there is an overall increase to entire budget. Among other efficiencies, some of the savings include a rearrangement of some administrative duties, which were previously provided through contracted services, will now be provided by the chief and reallocated to the costs for a full-time chief,” the statement adds.