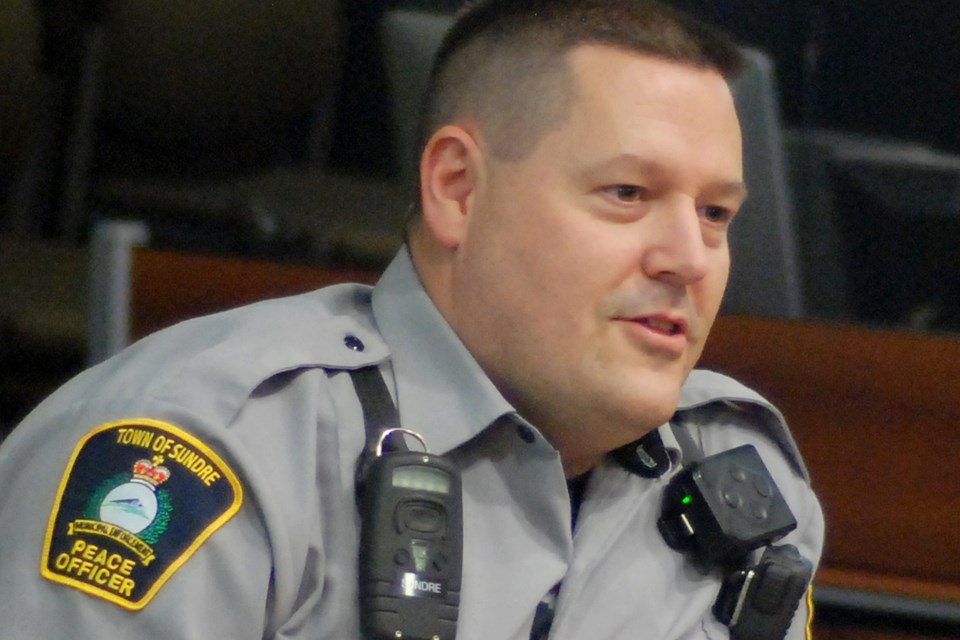 Kevin Heerema, Sundre's director of emergency management as well as the municipality's community peace officer, said there is not yet justification to issue a mask mandate, but encourages their use when physical distancing is difficult or not possible File photo/MVP Staff

SUNDRE — Council agreed to draft a letter to local residents outlining the municipality’s stance on best practices to protect the public during the ongoing pandemic.

Although there will be no official mask mandate for the time being, the use of face coverings in situations when physical distancing cannot be maintained is being encouraged.

In large part inspired by similar correspondence compiled by City of Red Deer’s mayor Tara Veer -- who was responding to the recent resurgence in confirmed COVID-19 cases -- Sundre’s mayor Terry Leslie sought support from his colleagues to take a similar approach.

Leslie raised the matter for consideration on Tuesday, July 28 during a special meeting conducted by teleconference, and said he wanted to bring up the issue following a Central Zone mayors and reeves’ caucus meeting the week prior.

The recent uptick in cases has resulted in patients being hospitalized in Red Deer, including some that were placed in intensive care units, he said.

Throughout Alberta, many municipalities are starting to consider mask usage, with some — most notably Calgary — issuing mandatory mandates under certain circumstances.

“The premier has indicated that municipalities will be making that choice,” said Leslie, who added Veer’s letter was informative and indicated there would be no mandatory mask orders, but that numbers are being monitored and the situation subject to change pending revision.

Heerema, who also serves as the municipality’s community peace officer, said he agreed with the spirit of Veer’s letter in the sense of communicating with the public.

“Still, the biggest thing people got to remember is washing hands and social distancing,” he said.

“With that said, I definitely encourage anybody who wants to wear a mask, to do so — it’s definitely not a bad idea.”

Even simple disposable or reusable homemade masks can be beneficial for use indoors in situations where maintaining two-metres of physical distancing is difficult or not possible, such as the grocery store, he said.

“While there’s no proof that says it (a mask) will prevent you from getting it (COVID-19), they do believe that it does help protect others from being exposed to you, if you are a carrier — even if you’re asymptomatic,” he said.

Heerema also pointed to how few cases have been recorded in Sundre and Mountain View County, and added there to date have been no deaths in either.

“That really speaks a lot to people adhering to those rules that are in place already," he said.

“With the numbers that we’re seeing elsewhere in province, I can’t say that we got this far because of luck — definitely luck may have played into it — but it’s because of our public, our staff, our service providers, and the sacrifices of each and everyone of us that we’ve made it this far without an outbreak.”

Should the situation change moving forward and numbers start increasing, then perhaps an official mask mandate could be considered. But for now, Heerema said the public should be encouraged to do what people consider appropriate, and to remind residents that masks are “definitely not a bad idea” in crowded spaces.

The mayor asked whether any members of council would be willing to make a motion to draft a letter as per the discussion and send it out to the community, or simply to accept the item for information.

Coun. Cheri Funke moved to proceed with composing a letter, but wondered if the correspondence should come from council, or perhaps be better suited coming from emergency management.

“I see it as something that the mayor and council can deal with,” said Leslie, adding he would certainly seek input from emergency management before sending the letter.

But seeing as there are other municipalities around the province drafting bylaws, the mayor said the information should come from council.

Speaking in favour of the motion, Coun. Richard Warnock said he liked what Heerema said with regards to encouraging the use of masks when people cannot maintain physical distancing.

Coun. Rob Wolfe wondered if council would see the draft prior to the letter being sent to residents.

“I can certainly do that,” said Leslie.