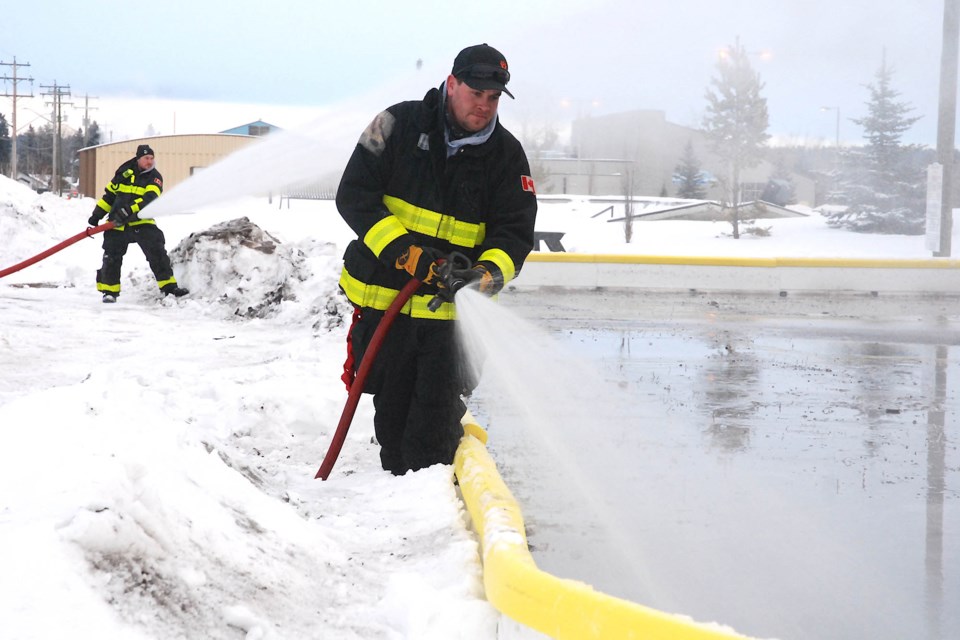 Sundre Fire Department members Cody McAllister, left, and training officer Matt Heinz, began flooding the outdoor community rink adjacent to the Sundre Skatepark near the Aquaplex on Dec. 30. No official opening date was announced, but the ice is expected to soon become available, depending of course on conditions. Simon Ducatel/MVP Staff

SUNDRE — An effort to flood the ice surface for outdoor rinks that would otherwise be a time consuming task using a small hose and water trailer, was substantially accelerated courtesy of some help from local firefighters.

The Sundre Fire Department was brought on board to deploy a tanker with a couple of members who made short work out of flooding the rinks in Bergen and Sundre.

Annette Boomer, a community service operator with the municipality, said she was directed to contact acting fire Chief Alex Clews about the possibility of coordinating that effort.

In the span of less than two days, firefighters were able to finish three floods at Sundre’s outdoor rink, located adjacent the skatepark near the Aquaplex. Prior to that, they had also been to the outdoor rink at the Bergen Missionary Church to help prepare that ice surface as well.

“It’s going a lot quicker, that’s for sure,” she said.

With the ongoing pressures of the COVID-19 pandemic that have resulted in strict measures including the closure of indoor sporting facilities like the arena, Boomer said the municipality wanted to as soon as possible provide the community with a recreational opportunity that puts a smile on people’s faces and gives them a chance to have some fun while getting some fresh air and exercise.

Recognizing of course that outdoor ice depends on weather conditions, Boomer said that so long as the stars align, the rink should be open by the end of the week.

“Nobody’s allowed to skate on there until next year!” she said at the time, with a laugh.

As the site is unsupervised, she said people will be expected not only to be courteous with other users such as taking turns when it’s busy, but also adhere to protocols such as physical distancing.

“Just respect everybody, enjoy and be safe,” she said.

“We’re really hoping to all band together during this tough time.”

Town staff will, when possible, keep an eye on the rink and do their part to ensure it’s safe. While the rink will be included among snow removal priorities, she said people are still encouraged to be prepared to bring a shovel along in case staff haven’t yet had a chance to clear the snow.

Boomer hopes people come out to enjoy the ice as soon as it’s ready.

“I can’t wait to see some happy faces out there!” she said.

Rob Holland, pastor at the Bergen Missionary Church, said during a phone interview on New Year’s Eve that the ice would be ready “any day now” provided conditions allow. He added people can keep an eye on the church’s Facebook page for updates.

While the ice is already largely prepared, there remained a few t’s to cross and i’s to dot, he said.

“Right now, because of COVID, we’re limited to one household at a time.”

So, efforts were ongoing to develop a turn-based system that he said might end up involving a sign-up board to reserve a time in advance so that when people show up, they know the rink will be available.

Holland also expressed gratitude for the fire department’s help. Although the ice had previously been flooded by church volunteers, the warm spell earlier in December melted most of it, he said.

“They came in and did a top up,” the pastor said about the firefighters.

The rink is available to the community, and people are simply asked not only to be mindful of the rules that will be posted, but also to extend courtesy to one another and share in the responsibility of clearing the ice after a snowfall.