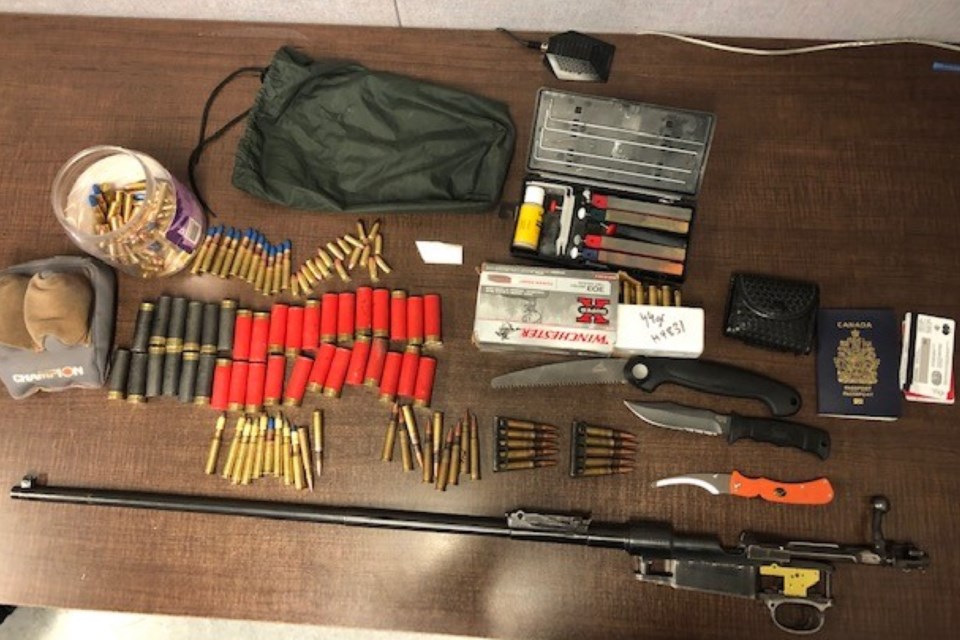 The Southern Alberta Crime Reduction Unit seized a long rifle, multiple rounds of ammunition, as well as several pieces of identification including a Canadian passport from a vehicle two Sundre suspects were travelling in. Photo courtesy of RCMP

SUNDRE — Two local people have been arrested as a result of a Southern Alberta RCMP Crime Reduction Unit investigation that led police to recover stolen property.

A subsequent search of the vehicle police say the accused were travelling in resulted in the seizure of a long rifle, multiple rounds of ammunition, as well as several pieces of identification including a Canadian passport.

Clark faces additional charges of possessing a weapon contrary to a court order and driving a motor vehicle while prohibited contrary to the Traffic Safety Act.

In relation to an investigation regarding a stolen vehicle and attempted catalytic converter theft that occurred in Didsbury on Sunday, Feb. 14, the Didsbury RCMP have also charged Clark with mischief under $5,000, theft under $5,000, possession of property obtained by crime over $5,000, and failure to comply with release order.

Following a judicial hearing, Clark was remanded into custody and was scheduled to appear in Okotoks provincial court on Friday, Feb.19.

Patterson was later released and ordered to appear in Didsbury provincial court on Monday, March 22.

Police said the ammunition recovered is very distinct, with most of the rifle rounds being “reloads” with blue tips.

Anyone who believes the property might be theirs, or who has information regarding the owner of the ammunition, is asked to contact Sgt. Gary Maclaren of the crime unit at 403-704-6283.