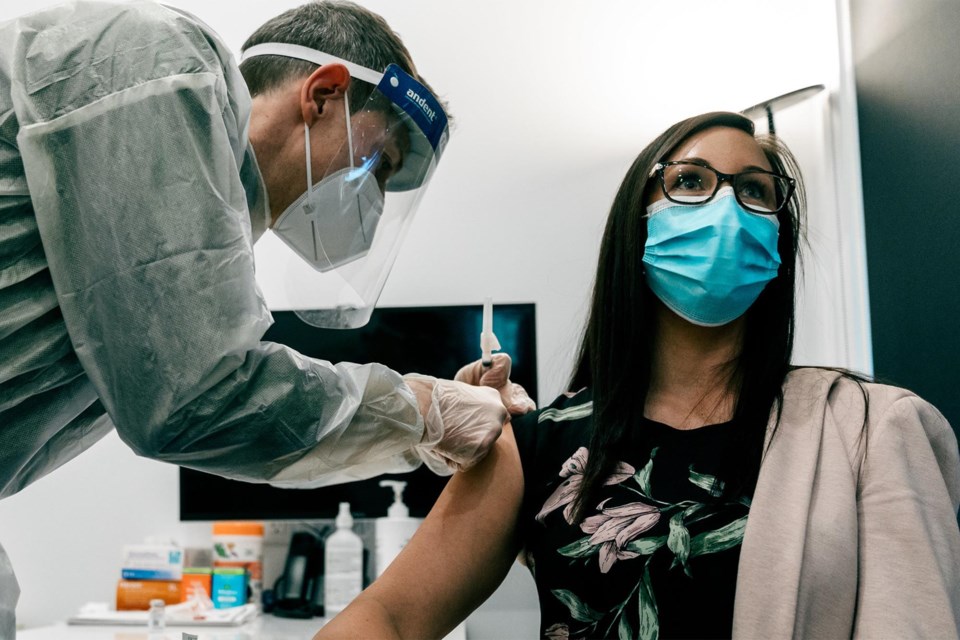 SUNDRE — The light at the end of the COVID-19 tunnel might at last finally be getting brighter, but we’re not quite out of the pandemic woods yet.

“I’m really, really hopeful that we’re not going to have another wave,” said Dr. Michelle Warren during an interview when asked her thoughts on the future and whether she anticipates the worst of the health crisis is finally behind us, or if the rush to reopen might end up paving the path for a potential fourth wave in the fall as variants become the dominant strains.

Observing the situation as it continues to unfold in other countries around the world, such as Israel and Vietnam, should be cause enough for caution, she said.

“They’re facing this wave of variants. So, I think that’s always a concern that you can’t ignore — as much as I’d like to,” she said.

“The pandemic doesn’t end on a calendar date just because we say so. The risk is still there and the infections are still there.”

That being said, however, the vaccines will play a role in helping the world return to a sense of normalcy, she said.

But to maximize that approach’s success, populations in countries like Canada will need to reach higher levels of complete immunization, she said.

And if young people aged 12 and under are not eligible, she said the lofty goal of fully vaccinating 75 per cent of the entire population will remain out of reach.

“So, I’m really hopefully, but I’m also a little bit pessimistic that I’m anticipating what we’ll see is more local outbreaks — communities where we don’t have high vaccination rates,” she said.

As people make plans to travel throughout the province to enjoy Alberta's limited summer months, Warren said more local outbreaks can be expected.

From a policy-making perspective, the pandemic has become something of a catch-22, she said.

However, plenty has been learned about the virus and how to treat patients who contract it. Throughout the last wave, she said patients who tested positive were followed up with virtually on a regular basis.

“We were really good at keeping people out of hospital until they absolutely had to be there, and I think that’s a good thing,” she said.

Although there is a low risk of side effects that leaves someone who received a vaccine feeling a little sick, she said, “you’re less likely to get sick enough to have to go to the hospital or have to end up in ICU (the intensive care unit) or die from it.”

In other words, she said vaccines can reduce the illness burden on the health-care system by preventing the worst symptoms from materializing and subsequently requiring urgent hospital care.

Recent reports that the vast majority of new COVID-related hospitalizations are patients who have not been vaccinated reinforces the importance of getting immunized, she said.

Asked how she responds to patients who express concerns about the vaccine either altering their DNA or rendering women sterile, Warren spoke bluntly.

“That’s just misinformation. If they believe in that, I’ve got a bridge to sell them,” she said.

“There’s a lot of misinformation that has absolutely no scientific credibility whatsoever.”

Regarding claims that the mRNA-based vaccines will somehow alter a person’s genetic makeup, she said that’s physically impossible.

“RNA cannot get close to your DNA,” she said.

“They’re in completely different areas of the cell, and they’re like polar opposites of a magnet — they repel one another.”

When patients come into the Moose & Squirrel Medical Clinic, which monitors and keeps track of their status similar to other shots like for example tetanus or the flu, the physician said she’ll inquire why those who haven’t been immunized against COVID-19 remain reluctant to get the vaccine.

Having heard concerns from some patients with regards to claims about fertility, Warren said she reassures them the vaccine does not reach a woman’s ovaries.

“It doesn’t travel that way. It doesn’t cause infertility,” she said.

From her own personal perspective as not only a woman but also the a mother of three adult children, two sons and a daughter, Warren said she would never have administered anything that would put them at risk.

“I plan to be a grandma one day. I think that’s going to be a lot of fun,” she said.

“And I would not have given my children anything that would put them in harm’s way or jeopardize (becoming a grandmother).”