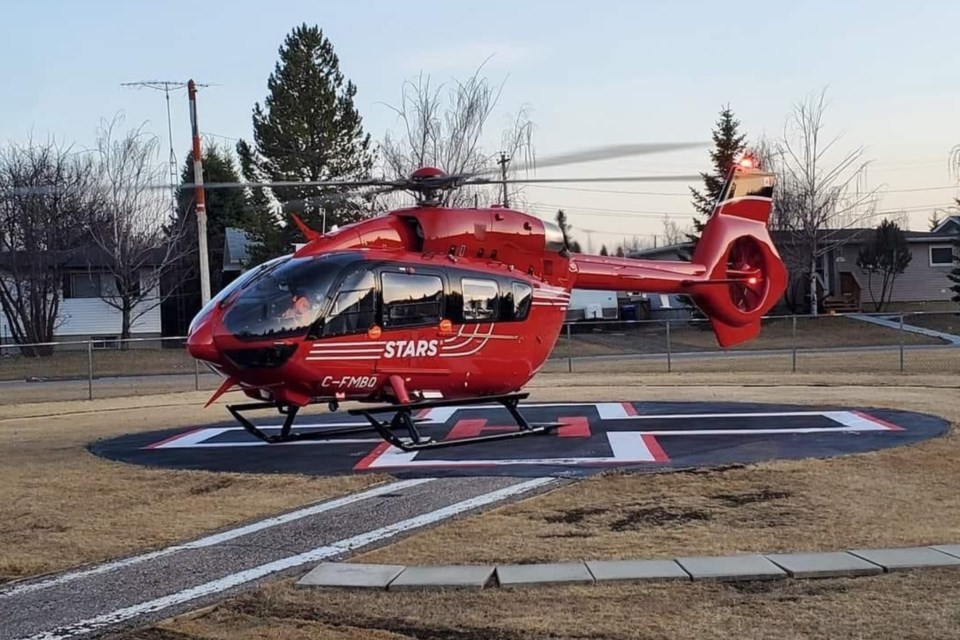 A new STARS Airbus H145 ambulance landed at the Sundre hospital on Monday, April 5 to provide care and transportation to the Foothills Medical Centre in Calgary for one of four male victims who sustained gunshot wounds during an active shooter incident in the Rocky Mountain House RCMP detachment's area. Photo by Andrew Wilson/Sundre hospital

SUNDRE — A victim of the O’Chiese First Nation active shooter incident was flown by air ambulance from Sundre on Monday night to a hospital in Calgary after sustaining injuries consistent with a firearm.

On April 5, STAR-2 from Calgary was dispatched at 7:29 p.m. to rendezvous at the Myron Thompson Health Centre in Sundre to provide care and transportation for a male patient who was suffering from wounds reported to be consistent with a firearm, said a spokesperson with Shock Trauma Air Rescue Service (STARS).

The male was subsequently flown to the Foothills Medical Centre in Calgary, where the new Airbus H145 landed at 8:51 p.m., the spokesperson wrote by email in response to questions, adding the patient was in stable condition upon arrival.

The patient was one of four male victims who were evacuated from an active shooter threat that unfolded on O’Chiese First Nation earlier that same day.

“I can confirm that the STARS attendance to Sundre was in relation to the active shooter incident that was occurring on the O’Chiese Nation,” Cpl. Tammy Keibel, RCMP media relations officer, told The Albertan during a follow up interview on Wednesday, April 7.

“One of the victims from that incident was transported from the Sundre hospital via STARS,” Keibel said, adding when asked that she had not received any further updated status reports on any of the victims’ conditions.

However, a police press release reported that all four victims were believed to have sustained non life-threatening injuries, although one was in serious condition.

“Two were treated at the local hospital (in Rocky Mountain House), and two of the four were transported, one to Edmonton and one to Calgary,” the corporal said.

A little after 5 p.m. on April 5, Rocky Mountain House RCMP received a complaint of a male who was shot at a residence on the Sunchild First Nation. Barely half an hour later, a second report of another shooting at the Marketplace on the O’Chiese First Nation, in which another male victim sustained gunshot wounds, was received just after 5:30 p.m. Less than half an hour afterward, a third report of a shooting at a residence was received at 5:55 p.m., when two males were reported as having been shot, said police.

“RCMP officers from neighbouring detachments along with the RCMP Emergency Response Team, Air Services and Police Dog Services PDS were called in to assist,” reads a portion of a press release, adding the O’Chiese Fire Department also provided assistance in advising residents to shelter in place.

“One suspect was tracked by Air Services and arrested by RCMP members on the ground,” said police, adding the canine unit that was deployed discovered a track near one of the scenes, which subsequently resulted in a second suspect being located and arrested.

“The investigation indicates that the suspects were both travelling on an ATV and then after the initial shooting, the suspects stole the victim’s ATV.”

The four victims — aged 18, 19, 20 and 34 — were transported to the Rocky Mountain House Health Centre. From there, two of the patients — the 34- and 19-year-old — were flown by STARS to hospitals in Calgary and Edmonton, said police.

Keith Beaverbones, 28, and Zachary Yellowface, 19, both from the O’Chiese First Nation, have each been charged with four counts of attempted murder.

Additionally, Yellowface was charged with:

• theft of a motor vehicle

Following a judicial hearing, both of the accused were remanded and scheduled to appear April 7 in Rocky Mountain House provincial court.

“This is a nightmarish situation for everyone involved, including the police, but most importantly for the members of the community,” the Rocky RCMP detachment’s Staff Sgt. Carl Dinsdale said in the press release.

“I’m thankful that there was no loss of life during this event, and grateful for the quick response by members from Rocky Mountain House and surrounding detachments, as well as local EMS, RCMP Air Services, Police Dog Services and the Emergency Response Team. It was the timely response by all these members, units and partner emergency services that was the key to the quick apprehension of these two suspects without further injury or loss of life.”

As these matters are now before the courts, police said no further information will be provided.