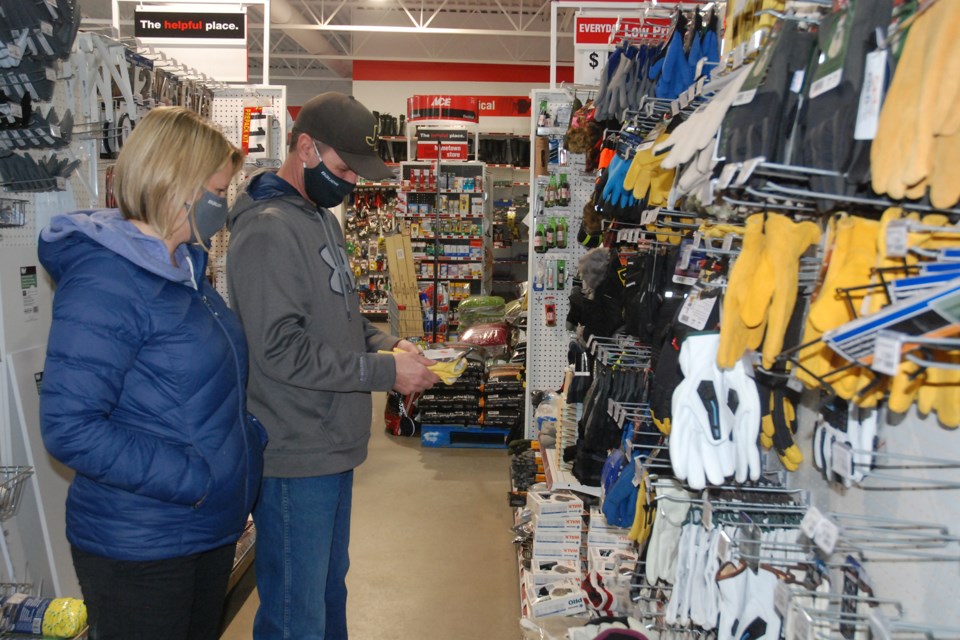 Sundre residents Susie and Terry Smith browse the selection of work gloves as well as some other odds and ends at the ACE Hardware on Jan. 8 in preparation of some home projects. Store manager Brenda Sowerby said she has gotten the impression more people have been shopping locally not only over the holidays, but also throughout the course of the pandemic. Simon Ducatel/MVP Staff

SUNDRE — Several local businesses reported experiencing not only a better holiday shopping season than 2019, but a better year all around.

“It seemed like it was a lot more local people were shopping,” said Brenda Sowerby, manager at ACE Hardware.

The Christmas season was better in 2020 than 2019, said Sowerby, who worked throughout the holidays.

“All in all, I think it was very successful — it was a good year,” she said. “I don’t know if that was because we were listening over the year to find out what customers wanted."

ACE remains relatively new to Sundre, having been around for just a few years, she said.

“The biggest thing I can say in the retail industry is a big shout out to everybody that did shop local,” she said, recognizing that shoppers still face the temptation of choosing big box stores.

So if it wasn’t for everyone who made the effort to shop local as much as possible, it would have been an even rougher year, she said.

Her sentiments were echoed by other local business owners like Brenda Johnston, owner of the Bear’s Den Clothing Company.

“I would have to say it was considerably better,” Johnston said when asked how the past Christmas season compared with 2019.

“I’m going to guess probably about 25 per cent better sales than last year.”

“And the fact that the snowbirds didn’t go south, so they were buying their Christmas presents here too this year,” she said.

“People that I know who go south for the winter were in shopping for Christmas presents.”

Johnston expressed gratitude for all of the customers who stepped through the doors at her and other local businesses.

Residents also sought out spirits to warm up during a holiday season that’s been completely different from anything experienced in recent history.

“Sales were up, but that’s been consistent throughout 2020,” said Cherie Petersen, manager of Main Avenue Cold Beer & Liquor Store.

“Our holiday season, I would say I’m happy with it,” said Petersen.

She said sales have increased since the start of the pandemic, and that the summer months saw a lot of through traffic as visitors stocked up on their way to the West Country.

But at this time of year, customers are mostly local, she said.

“I’m just happy that everybody’s supporting us and we’re all sticking together as a community.”

Over at Sundre Home Hardware, co-owner Nicole Weatherbee, who runs the business with her brother Josh Hengen, said, “Typically, the Christmas season isn’t a huge selling time for us. But it was above 2019.”

That seemed to be a trend that stayed par for the course throughout all of last year, she added.

“I would say that we’ve seen an increase throughout the entire year, and I think a lot of that is due to people wanting to purchase locally, rather than going to the city,” she sad.

Increased numbers of people shopping local seems to have played an important role ever since the COVID-19 pandemic hit, she said.

“That’s been a massive factor — people don’t want to be going to the city,” she said, adding no shortage of residents have posted messages on social media encouraging everyone to support local whenever possible.

In that spirit, Weatherbee said they set up a display space at the front of their store to provide not only an opportunity for local vendors to showcase their goods during the Christmas season, but also a chance for local shoppers to check out the wares made by local talent.

“That went over phenomenally. That’s all taken down now, but it was something that we wanted to do to try and give local people a hand up in trying to showcase their goods,” she said, also grateful to everyone who shopped local.

“In a year that’s been incredibly frustrating, it’s been encouraging to see some positivity.”