River Valley School will for the second year in a row be hosting the community’s annual Remembrance Day service.
0
Oct 29, 2019 10:00 AM By: Simon Ducatel 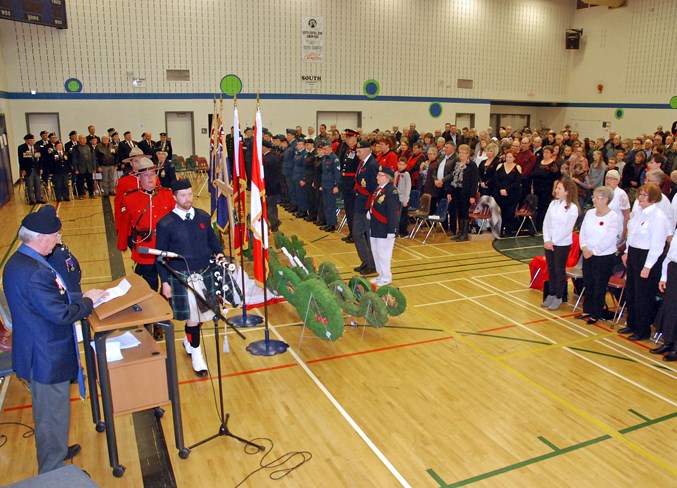 The Royal Canadian Legion Sundre Branch #223's annual Remembrance Day service was last year for the first time hosted at River Valley School, where the ceremony will again be held this year.

River Valley School will for the second year in a row be hosting the community’s annual Remembrance Day service.

However, after more than 20 years, this will be the last time the ceremonies will be officiated by Tim Kirby, the Sundre Royal Canadian Legion Branch #223’s comrade chaplain.

“I’m no longer going to be giving leadership at the branch or as chaplain,” said Kirby last week during an interview.

“The branch is in really good shape right now,” he said, expressing confidence in the people who will be stepping up to continue running the local legion.

When asked what inspired him to carry the torch for so many years, he cited as his primary motivation a deep-seated desire to honour the memory of Canada’s fallen.

“We cannot forget the people who gave us the Canada we have,” he said.

When his father Tim Kirby II served during the Second World War with the Royal Mechanical Engineers, he would never shy away from approaching “the walking dead” — soldiers who were torn up on the battlefield and lay dying in the aftermath.

“Dad would always stop and be with them in those last moments,” he said.

“They’d ask to be remembered.”

The first ceremony takes place on Thursday, Nov. 7 at River Valley School starting at 9 a.m., followed immediately afterwards by the service at Sundre High School, which Kirby said is expected to be underway by 10:45 a.m.

The next day, on Friday, Nov. 8, a ceremony will be held for long-term care patients at the Sundre Hospital and Care Centre, with another service taking place afterwards starting at 10:30 a.m. at the Mountain View Seniors' Housing lodge.

The main community ceremony on Monday, Nov. 11 will be hosted at River Valley School.

“At quarter to, we’re going to be marching in.”

A central theme to his annual address revolves around the truth, which he says never changes.

“The truth is, we lost a lot of people overseas,” he said.

“The truth is, we need to stand up and put a stop to things,” he said, referring to ongoing human rights abuses around the world.

“The persecution of humanity is immense.”

Increases of hate crimes have been observed around the world, with hundreds of millions of people being abused and dehumanized, said Kirby, whose message also includes calling for more compassion.

“Love,” he has previously said and maintains, “is doing for others as you would do for yourself.”

With this year’s Remembrance Day following on the heels of a hotly contested federal election that has left many voters divided, Kirby, who did not speak about any politics or parties, had another message to impart.

“My thing is unity. Let’s get together, let’s work together and make things happen,” he said, urging everyone to “be the Canadians that our soldiers died defending. This is democracy.”