Saluting businesses' contributions to the community

Small to medium sized businesses are not only the lifeblood of communities like Sundre, but also the fuel that propels the whole country’s economy forward.
Oct 29, 2019 10:00 AM By: Simon Ducatel 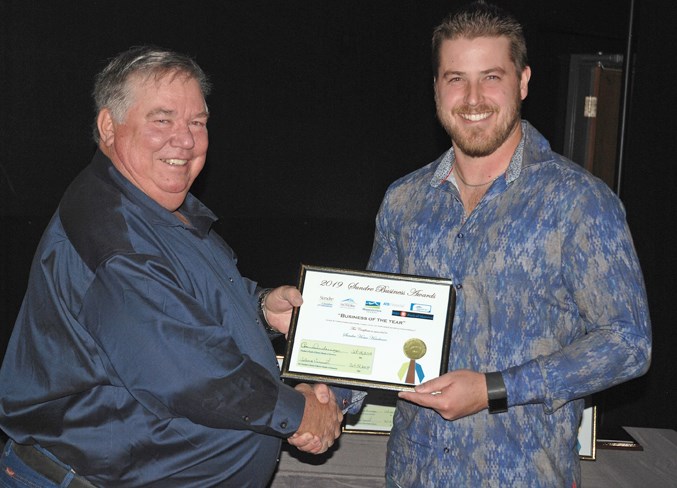 Connie Anderson, left, president of the Sundre and District Chamber of Commerce, presents Josh Hengen, owner and manager of Sundre Home Hardware, with the Business of the Year award on Friday, Oct. 18 at the Sundre Arts Centre during the annual Sundre Business Awards.

Small to medium sized businesses are not only the lifeblood of communities like Sundre, but also the fuel that propels the whole country’s economy forward.

“The reality is, without small business, which are the backbone of our economy, both here in this province and across the country — in North America for that matter — we would not succeed,” said Jason Nixon, the Rimbey-Rocky Mountain House-Sundre MLA.

He was addressing a crowd of about 60 people who gathered at the Sundre Arts Centre on Friday, Oct. 19 for the annual Sundre Business Awards.

“Across our entire country, we depend on you.”

Since the crash in oil prices left Alberta reeling, times have been difficult not only for small businesses, but also for workers and people who are unemployed and struggling to make ends meet, he said.

“Please hang in there, we value what you’re doing, there are a lot of people who depend on you.”

Aside from small and medium businesses' critical role in the economy, Nixon said they are also “the social safety net of so many communities.”

Throughout Canada, “people who are donating and providing resources are the small businesses in our communities,” he said.

“On behalf of the province, we appreciate what you do.”

The MLA presented the Entrepreneur of the Year Award to Chris Aldrich.

“An entrepreneur is a person who identifies a need, takes an idea, product or service, accepts the risks associated with such an idea and introduces it to the marketplace where it can produce results and generate revenue,” said Nixon, calling that definition the “perfect description” of Aldrich, followed by a round of applause. 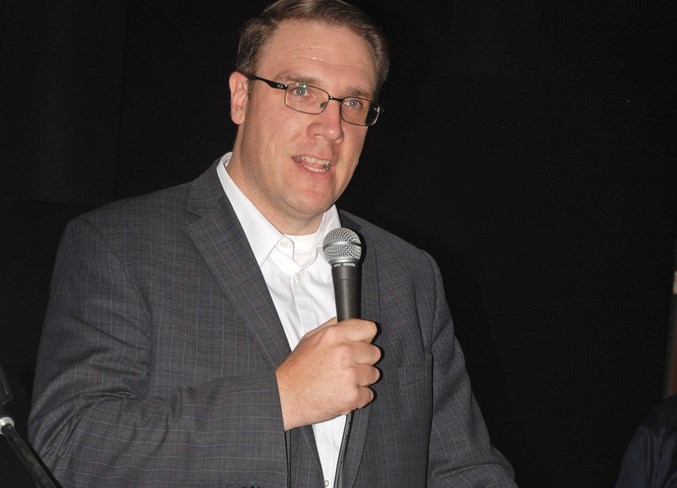 Rimbey-Rocky Mountain House-Sundre MLA Jason Nixon shared some thoughts during an address to about 60 people who attended on Friday, Oct. 18 the annual Sundre Business Awards at the Sundre Arts Centre. “The reality is, without small business, which are the backbone of our economy, both here in this province and across the country, in North America for that matter, we would not succeed,” he said. Simon Ducatel/MVP Staff

“Chris’s ability to look at the market and identify not only the current market needs but to look out and identify the future needs and direction of the market is what sets him apart and contributes to the amazing ongoing success that ACL Manufacturing, ACL Combustion, and Black Gold Rush Industries enjoy.”

Aldrich, he added, “has identified and developed niche products which not only increase the safety of oil and gas operations and workers but provide huge environmental benefits.”

Furthermore, he said Aldrich’s commitment to his home community is exemplified in his numerous contributions including supplying labour for all of the new playground installations in town, the annual car show and barbecue for the residents at Mountain View Seniors' Housing, as well as donations to kids' sports programs, among many others.

After Nixon presented the award, Aldrich said, “We look at our town as our family. We want to be here, live here, and enjoy the amenities here.”

Expressing gratitude for the recognition, Aldrich added, “we can't do it without our staffing and of course my wife and family.” 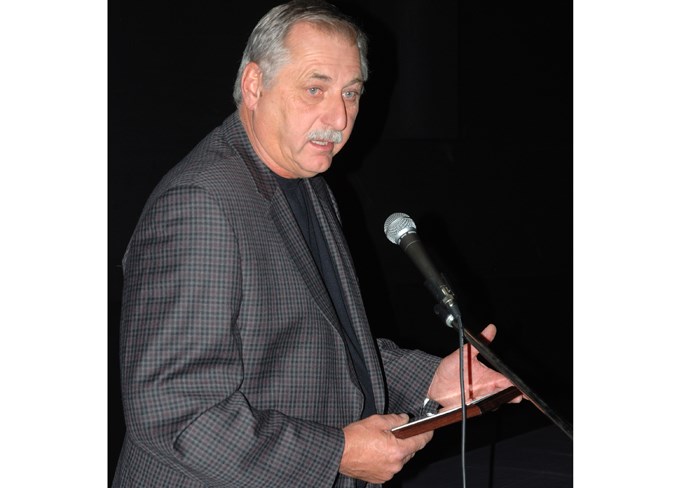 Chris Aldrich, owner of several Sundre-based companies, was named Entrepreneur of the Year. “We look at our town as our family. We want to be here, live here, and enjoy the amenities here,” he said. Simon Ducatel/MVP Staff

Heidi Overguard was the evening’s MC, and said the awards night is an opportunity to celebrate the tenacity of business owners, as well as their vision and endurance, “particularly during the last couple of years of economic instability in our province.”

But “above all, they care — they continue to give back. Every. Single. Day.”

She said the nominated businesses have all given back to the community in more ways than one -- whether donating to local groups or participating in community fundraisers as well as volunteering time to sit on boards and committees.

“Our business leaders don’t want recognition,” she added, “and some will even go to great lengths to avoid it as they consistently like to just be behind the scenes.”

Connie Anderson, Sundre and District Chamber of Commerce president, who presented the awards, said during a followup interview that the evening was successful, but that he would have liked to have seen more people come out.

“It’s all about the businesses in Sundre,” he said, adding the chamber continues to seek additional help and welcome new members.

Other nominees were All Around Building Services and Twisted Pantry

Other nominees were West Fraser and Sundre IGA

Rookie under two years in operation

Other nominees were All Around Building Services and Sunshine Cabs

Other nominees were Outkast Oilfield Supply and Klis Electric

Other nominees were Tanner Grunau and Frank Dziadek

- All Around Building Services

Other nominees were Sundre IGA and Sundre Home Hardware