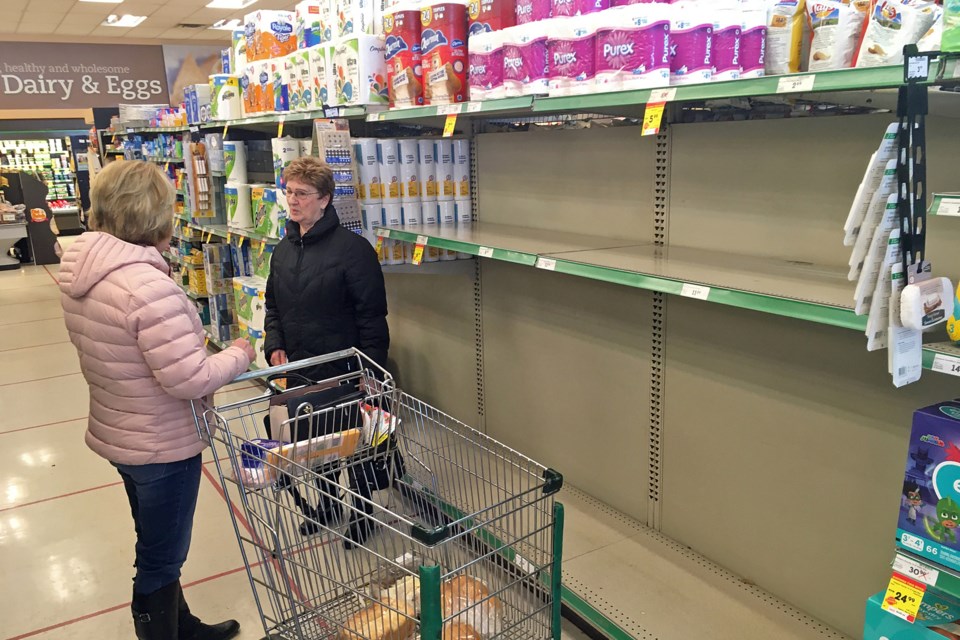 A couple of friends catch up over a brief chat after crossing paths Sundre IGA, which was all but completely out of bathroom tissue on March 6 with shortages continuing this week. Simon Ducatel/MVP Staff

SUNDRE - The owner of Sundre IGA said he was “absolutely” caught off guard by the unprecedented rush of customers purchasing bathroom tissue to the point of completely depleting stock while shorted orders from the warehouse combined with demand has left other shelves bare.

"It was gone in one day,” said Mennear, adding that approximately 60 packages of toilet paper were sold altogether and shelves that day were bare.

“I still can’t figure out it either!”

Some customers, he said, were “buying anything and everything — didn’t matter if it was on sale.”

When asked who were the customers coming in to purchase so much toilet paper, he said, “Everybody and anybody.”

The frenzy — which has been widespread across the province as even big box stores in cities struggle to maintain a supply — seemed to have been triggered at about the same time that the first case of the novel coronavirus, COVID-19, was confirmed in Alberta.

And while there are still three deliveries a week, the shipments are 48-hours behind, he said.

“Things eventually roll in from the warehouse,” he said, adding orders can be expected to arrive four days after being placed.

However, he said some commodities are arriving shorted.

“We’re still getting chicken, but we’re getting less than what was ordered,” he said, adding, “We might see about a 60 per cent fill rate.”

In other words, about 60 per cent of what was ordered is actually being delivered, he said, adding that is the case for a number of items.

“We order a whole bunch, but are only seeing a partial order arrive. Same thing with eggs,” he said.

“We’ve still got a bit of this and that.”

Certain foodstuffs are still being delivered but sell out quickly, he added.

“The truck gets in, and within two, three hours, stuff like flour and sugar are gone.”

Fortunately, he said, “coffee seems to still be coming in.”

When Mennear opened the store on the morning of March 11, he said some customers had already been waiting outside since earlier than 8 a.m. before the doors even officially opened, hoping to find some bathroom tissue in stock.

When asked whether he has ever experienced a similar situation in the past, he said, “Nope, never. In 35 years, I’ve never seen anything like this.”

Mennear said he had heard about one customer at a Costco who scooped up an entire supply from a fresh delivery.

“One guy alone bought both pallets. That’s where I really don’t get it,” he said.

As one of few stores in town selling bathroom tissue, Mennear said he is doing what he can to order any available stock from the warehouse.

“We’re going to just try to get in whatever we can to keep the public happy.”

Fear enhanced by social media seems to be fuelling the sudden trend, said Dr. Michelle Warren, owner of the Moose and Squirrel Medical Clinic, when asked why she thought people are stocking up on such large amounts of bathroom tissue.

“They’re doing it because everybody else is doing it. People are worried that when they need toilet paper, they won’t have any,” said Warren.

Unfortunately, people who actually have run out of toilet paper at home might now struggle to find any, she said.

There is also a level of fear that stems from misunderstanding the virus itself, she said.

“It does not cause diarrhea,” she said, adding people do not need to stockpile “a ton of toilet paper.”

Rather, she advises replenishing cold remedy medicines such as Nyquil or Advil, perhaps even facial tissue.

“Whatever you usually take when you get a cold. But you don’t need a stockpile of that either,” she said.

“The biggest thing is, if you come down with a cold, don’t panic. Calm down.”

For the “vast majority of people” who contract the contagion, she said COVID-19 will just come and go similar to a common cold.

Those who do experience shortness of breath are encouraged to call 811 and follow steps that include going over symptoms.

“There’s a really long wait when you do call because people are panicking,” she said, encouraging people to be patient.

“Put it on speaker phone and pass the time, eventually they will answer.”

Anyone who is straining to breathe and can barely finish a complete sentence without struggling should immediately contact 911, with responders likely to arrive wearing masks and able to assess whether the patient might need oxygen, she said.

“They’re the ones we’ll need to see.”

But the average person who feels like a regular cold or sore throat is coming on has nothing to worry about, she said.

“I don’t need to see you — I can swab you, but I will just send you home after.”

Medical clinics will be screening calls, and she said appointments for a common cold will not be booked.

Health-care professionals, she added, want as much as possible to keep susceptible populations — namely seniors and those who are immunocompromised — away from those who could be contagious with COVID-19, she said.

Furthermore, she said anyone who has travelled anywhere outside of Canada — not just other hot spot countries like China and Italy — in the past couple of weeks are considered at risk.

The World Health Organization officially declared the outbreak a pandemic on Wednesday, March 11.

The situation remains fluid, and Warren encourages people to stay tuned to developments that can be followed on the Alberta Health Services website, which also outlines recommendations.

Don’t flush flushable wipes, operations manager urges
Apr 4, 2020 2:25 PM
Comments
We welcome your feedback and encourage you to share your thoughts on this story. We ask that you be respectful of others and their points of view, refrain from personal attacks and stay on topic. To learn about our commenting policies and how we moderate, please read our Community Guidelines.