Provincial funding may finally be made available to undertake Red Deer River bank stabilization work in town, the Save Our Sundre (SOS) committee was told following an Alberta cabinet ministers visit to Sundre last week.
Feb 15, 2011 12:00 AM By: Dan Singleton 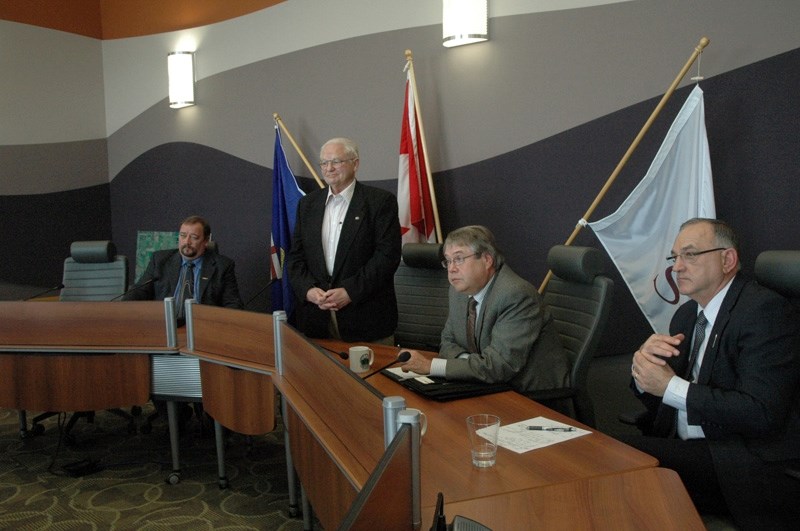 Provincial funding may finally be made available to undertake Red Deer River bank stabilization work in town, the Save Our Sundre (SOS) committee was told following an Alberta cabinet ministers visit to Sundre last week.

ìAfter the meeting Lloyd Snelgrove (Treasury Board Chair) told our committee member Myron Thompson that they will most likely be able to find the money,î SOS chairman Jim Eklund said Friday. ìHe said the government would look for it (funding) if we get the permission permits from Oceans and Fisheries.

After several years of trying to get funding for the bank stabilization work, Eklund said he is ìvery optimisticî about the latest development.

Formed under the auspices of the Sundre and District Chamber of Commerce following flooding in the region in 2005, the SOS committee says flooding protection on the west bank of the Red Deer River in town is a must.

If that protection is not put in place, the risk to people and property in town will remain a real and present danger, the committee says.

The SOS committee has made numerous calls for provincial government funding for the flood protection work. No money has been sent to date.

In December the SOS committee sent a letter to the provincial government asking for ìhelp in finding and securing funds from the province to protect our town from future devastation.î

The Town of Sundre might want to consider using a portion of the federal Municipal Sustainability Initiative (MSI) grant for flood protection work, he said.

(Last year Sundre received $537,318 for capital expenses under the program and is not anticipating an increase in 2011, says interim CAO Wanda Watson Neufeld).

Town councillor Patricia Toone told the ministers that the town should not have to use MSI funding for river work since the river and its banks are a provincial responsibility.

Mountain View County Reeve Paddy Munroe said heavy erosion along the west side of the river on the town's south boundary continues to occur and must be addressed.

ìThe river was hundreds of feet further to the east before the 2005 flood, which took all of that land out,î said Munroe. ìNow the river is where all the infrastructure is. It needs stabilization at that location.î

During the meeting, committee member and town councillor Myron Thompson told the minister it would be better for the province to spend $2.2 million on river bank stabilization now rather than much more should a future flood break through the banks and flood the town.

ìIt's going to be a major disaster if nothing is done,î said Thompson. ìWhy would we even consider using some of that MSI money when it is the responsibility of the two other levels of government? It makes no sense.î

Minister Renner said Sundre is only one of many Alberta communities calling for provincial funding for riverbank stabilization.

He also said the government cannot allow individuals to undertake river stabilization projects without government approval because doing so would ìcause chaosî across the province.

ìThe bottom line is you save money at the end of the day when you do preventative measures,î said Eklund.

In its December letter to the province the SOS committee said, in part: ìThe continued riverbank erosion damage being done within our town began with the disaster of the 2005 flood, which continued every year since. This is still an ongoing disaster.î

Fresh section of asphalt on Centre Street
Jul 1, 2020 6:00 AM
Comments
We welcome your feedback and encourage you to share your thoughts. We ask that you be respectful of others and their points of view, refrain from personal attacks and stay on topic. To learn about our commenting policies and how we moderate, please read our Community Guidelines.