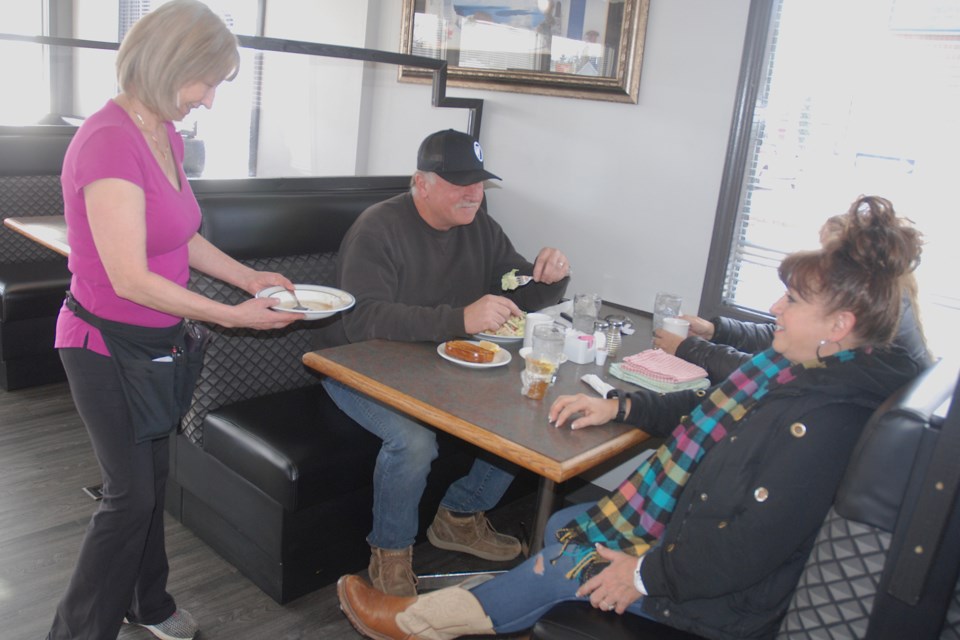 Helen Mitsoulas, who owns and operates Piros Family Restaurant in Sundre with husband George, serves customers on a Saturday afternoon. Since the establishment is usually closed well before 10 p.m., they do not anticipate a significant impact as a result of the enhanced pandemic measures announced last week by the provincial government in light of a surge in cases. Simon Ducatel/MVP Staff

SUNDRE - The owner of a pub and a restaurant in Sundre anticipates that not only will closing the pub early impact his bottom line, but so too will other measures announced by the provincial government as cases increase.

Sundre is considered by provincial officials to be under enhanced relaunch status as is Mountain View County and all the urban centres located geographically within it except for Olds.

Under new mandatory measures set in place for two weeks for enhanced communities, bars, restaurants, lounges and pubs are required to stop liquor sales by 10 p.m. and close by 11 p.m.

“I lose an hour’s worth of work at my pub. But it also puts the scare into people, which keeps them from coming out as well,” said Chris Vardas who owns Cedar’s Pub and Original T’s Family Restaurant.

“When you put drastic measures in, it puts a fear into people. But, at the same token, we gotta do what we gotta do to keep everybody safe too,” he said.

Although his restaurant already closes by 10 p.m., the pub is usually open on Fridays and Saturdays until midnight.

“So, I gotta close an hour earlier,” he said. “Does it impact financially? It always does a little bit.”

He added there will be a ripple effect for his employees who will get fewer hours, thus earning less income.

The new mandatory restrictions also include a 15-person limit on family and social gatherings, a 50-person limit on wedding ceremonies and funeral services, and all faith-based organization attendance is limited to one-third capacity.

Kent Janz, pastor at McDougal Chapel west of Sundre said the enhanced measures will impact both their operations as well as people’s morale.

“I was saddened for our people. I think people understand the why, but there’s discouragement for sure,” said Janz.

While the pastor had earlier during the shutdown conducted virtual services, Janz said the chapel’s doors were reopened as soon as they could.

“When we were allowed to open the doors, people were waiting outside. People were anxious to get in,” he said.

For enhanced communities, mask use is encouraged in all indoor work settings, except when alone in a workspace or where an appropriate barrier is in place, and there is also a limit of three cohorts.

Employers in office settings are supposed to implement strategies to reduce the number of employees in the workplace at one time.

Sundre’s mayor, Terry Leslie, said he supports the provincial government’s approach to keep the economy open while relying on Albertans to make responsible decisions about gatherings and potential spreading events.

“The last thing that anybody wants is government telling them what they can and can’t do in their own homes,” said Leslie.

But the mayor also wondered how different the outcomes would be if everyone decided to wear a mask when out in public and unable to physically distance, versus refusing to ever put one on.

“The probability that we could have an effect if we all decided to follow all of these guidelines, keep our contacts to a minimum, protect each other and our communities, I think that that would go a long way to trying to bend the curve to stop COVID-19.”