Patrons pleased to be back at Sundre Aquaplex 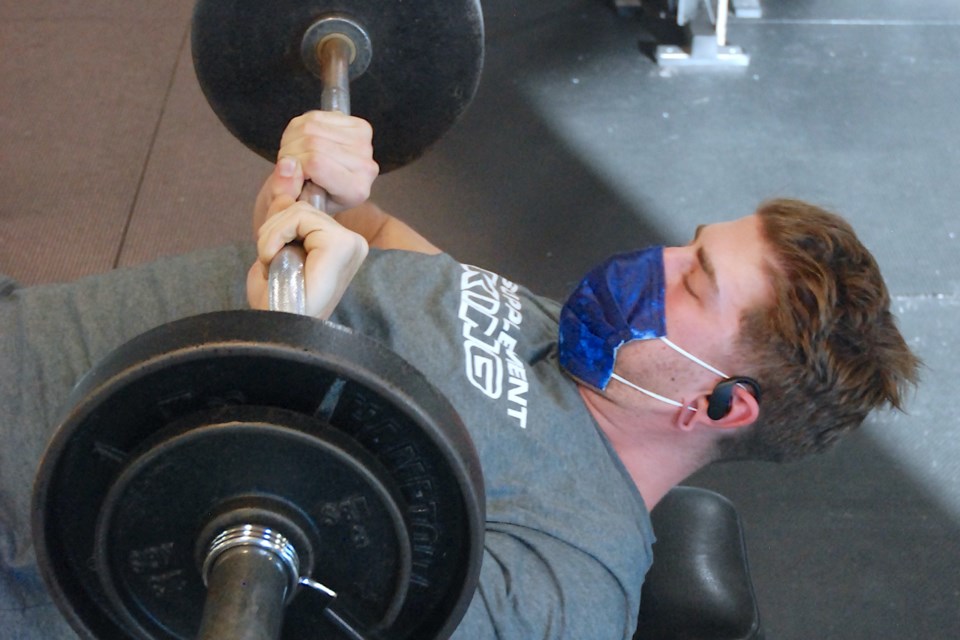 Cole Vanderzwan, from Sundre, a long-time member of the Sundre Aquaplex's indoor fitness centre, has been coming back to work out since the facility reopened under public health protocols earlier this month. Simon Ducatel/MVP Staff

SUNDRE — Despite the pandemic health measures in place at the Aquaplex, the indoor pool and fitness centre’s manager said patrons seem pleased to be back.

“Even working out with their masks, people are just so happy to be able to come,” Kari McQuaid said Tuesday, March 16 during a phone interview.

“I think it’s sometimes underestimated how much being active” is crucial to people’s overall well-being, said McQuaid.

“This facility is a part of people’s lives and their mental health — it’s huge.”

Cole Vanderzwan, from Sundre, a long-time member of the Sundre Aquaplex’s indoor fitness centre, has been coming back to work out since the facility opened back up under public health protocols earlier this month.

“It’s just nice being able to get some activity back in my life and not be stuck at home or work,” he said during a brief pause from his exercise.

As of Feb. 13, the indoor pool was reopened under Step 1 of the provincial government’s COVID-19 mitigation measures to relaunch the economy as safely as possible.

“At that time, the government allowed one-on-one personal training, or one-on-family training,” she said, adding appointments had to be booked in advance.

“We went forward with a couple of options which we’ve kind of kept,” she said.

One approach offers formal Red Cross swimming lessons — complete with badges and report cards as per Red Cross specifications — that are conducted by a certified instructor who is available to take appointments, she said.

“But we also do have very skilled lifeguards who are able to just teach people basic swimming skills,” she added.

Although scheduled one-on-one or one-on-family personal training appointments were also available at the fitness centre under regulations outlined in Step 1, the logistics involved in offering that service at the local gym was not an option, she said.

“Because we only have one personal trainer, it wasn’t feasible to open up to allow one person in at a time.”

But that changed earlier this month, when the government officially announced the economic relaunch strategy’s Step 2.

“Once they allowed Step 2, they did allow individuals to start working out independently as long as they were masked and kept it at low intensity,” she said, adding they must also maintain a three-metre distance from other patrons.

With those rules in place, staff at the Sundre Aquaplex was able to book appointments for anybody who wanted to work out and was willing to adhere to the guidelines, she said.

“Basically, it’s just rolling with what the government tells us is possible, and then putting those things in place as best we can.”

So, for now, a trainer is required for people interested in booking a time at the pool alone or with their family.

Meanwhile, although individuals who want to use the fitness centre don’t require a trainer, they must still book a time and don a mask, she said.

“In the fitness centre, as long as it’s low intensity, they are allowed to sign in and go do their workout independently. If they want to work out at a high intensity, they require a personal trainer.”

McQuaid seemed optimistic about the path ahead.

“I hope that we keep taking steps forward to open more, because I just think that it’s a huge piece of people’s health in general to stay active and stay engaged in the community,” she said.

“We are thrilled to have staff back and people back, and I hope that we just go from here to offer more,” she said, adding staff have missed patrons as much as patrons have missed coming out to the Aquaplex.