'Just too big a risk, with people putting their hands in and taking poppies out,' Legion branch president says
Oct 14, 2020 5:00 PM By: Simon Ducatel 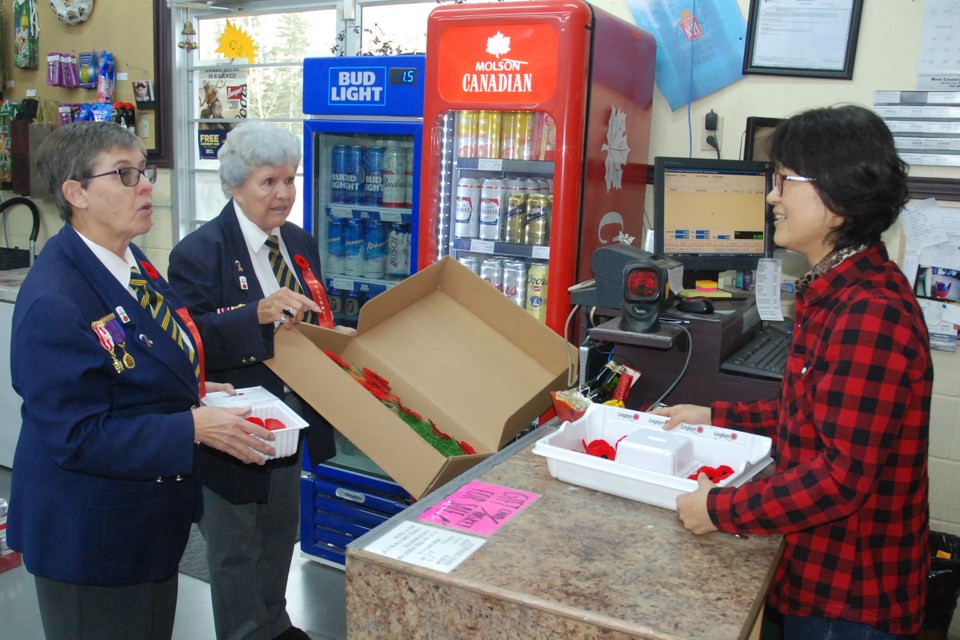 Sundre Legion poppy fund volunteers Sharron Kirby, left, and Marie Coderre delivered trays and wreaths to community businesses, including the Bergen Road Liquor Store in 2018. Trays and wreaths will not be put out this year in Sundre. File photo/MVP Staff

SUNDRE - The pandemic has forced Sundre's Royal Canadian Legion Branch #223 to reconsider its approach for the annual poppy drive.

“We have provided self-addressed, stamped envelopes and we have dropped them off at all of the businesses in town,” said the local branch's president, Christina Ferguson.

“Instead of going and selling wreaths, we have told them this is what we’re doing — if they can donate something, we’ll be glad to accept it. And if they can’t, we totally understand, with this pandemic that’s going on.”

The logistics involved in safely handling the poppy boxes — which are usually placed on the front counters and shelves of local businesses throughout town — presented a real concern, she added.

“We can’t put the poppy boxes on the shelves at stores anymore — not this year anyhow. Because it’s just too big a risk, with people putting their hands in and taking poppies out. That could possibly be a contamination point for COVID,” she said, adding an alternative approach is being considered.

“We are going to try and have one or two weekends where we could be outside, sell the poppies from behind a table, and pass the poppy with a pair of tongs so that nobody’s hands are going into the poppies so the chance of spread of COVID if somebody does have it, is reduced.”

Since safety is paramount, she said the legion does not plan to set up a table in any store lobbies or entrances.

“Because again, the chance of spread of COVID is just too great. And we’ve only had two or three cases to my knowledge in the community so far, and we really don’t want to have it any worse than that.”

Meanwhile, the inability to rent the hall as a result of COVID-19 restrictions combined with too few volunteers has left the legion essentially dependent on donations to continue operating, she said, expressing gratitude for the support of the community and volunteers.

“Nobody wants to rent a hall for 40 people,” she said, explaining the limit of 50 also includes volunteers.

“So, we have zilch as income — we have no income coming in whatsoever. What we’d like to get out is that during this time, if people are able to, donations to the legion would be gratefully accepted to keep the operations going.”

Although the legion no longer has a phone number, Ferguson said she can be contacted at 403-638-3707. Alternatively, she said cheques can be mailed to Royal Canadian Legion Sundre Branch #223 at PO Box 22.

The legion remains committed to serving the community, including providing assistance to any veterans who require aid as well as supporting others in their time of need. She said the legion intends to continue doing what it can to help wherever possible, within the parameters of what the legion is permitted to do through the national association.

The Nimble Fingers, a quilting cohort that is part of the Ladies Auxiliary, which in turn is part of the local legion, has 30 quilts ready to give out to someone in need. In the past, the legion has given to the Sundre hospital, the fire department, Ronald McDonald House, and women’s shelters.