Our D-Day in Sundre is April 1: Sundre physician 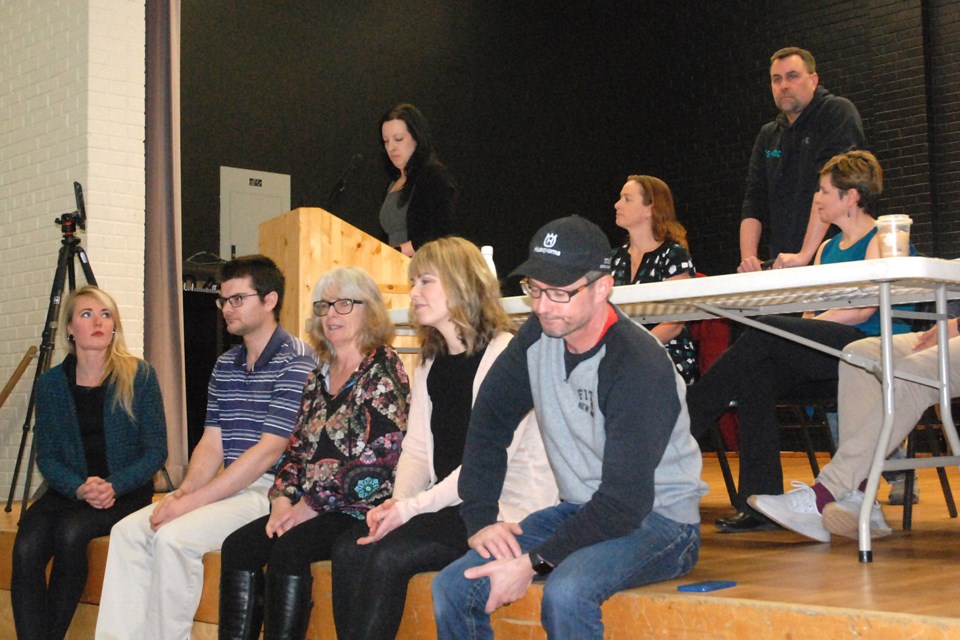 During a town hall meeting on Feb. 23, local physicians expressed their concerns about the government's changes, which they say will result in shorter visits with patients and longer wait times. Simon Ducatel/MVP Staff

SUNDRE - Doctors throughout Alberta are battening down the hatches and prepared to dig into defensive positions in their battle against the government’s changes to health care that have largely proven unpopular among the province’s physicians. Many are even prepared to pull up stakes.

“The continued behaviour of the UCP has really tarnished relations with doctors in the communities and many plan to leave permanently once they get through this crisis,” said Sundre physician Michelle Warren last week, referring to the spread of COVID-19.

“There is no Alberta advantage anymore. Just many disadvantages,” Warren said.

Health Minister Tyler Shandro’s approach has not been conducive to retaining and attracting physicians, she said.

Pandemic or not, people she’s talked with shake their heads in disbelief at the way physicians are being treated by the government, including being expected to work without a contract in place, she said.

"After that, things may change. If this government continues on, then there will be repercussions that we’re all going to be facing.”

While the government’s decision to freeze the complex modifiers for physician compensation was welcome, the move comes as too little too late.

“The complex modifiers being held is awesome — if you can actually see a patient face to face,” she said with a laugh.

Warren said the modifiers also don’t play any role with regards to virtual health, where 10 minutes or one hour spent on the phone or videoconference amount to the same thing, she said.

Warren said the addition of a mental health code for counselling that is time-based is also welcome. But the hold on changes to complex modifiers during a pandemic when efforts are being ramped up to avoid having patients book face-to-face appointments at a clinic seems like convenient timing, she said.

“I can’t in good conscience bring somebody into my office, A) who is symptomatic with COVID, because that puts everybody at risk, and B) because people shed the virus before they have symptoms,” she said.

“(So) that’s great that we still have those complex modifiers. But it’s kind of a safe time to do it,” she said.

“There is more that has to be done, and it has to be done quickly on the government’s part because talking through physicians in other communities, urban and rural, they are gearing up to go to war — COVID or not. And that’s bad, because who suffers at the end of the day? It’s the patients.”

Many physicians, including those at the Moose and Squirrel Medical Clinic, which Warren owns with husband Dr. Rob Warren, are “angry, upset and very close to giving up on Alberta, and the UCP in general. They are absolutely floored that this government would continue to push these ill-advised changes in midst of a pandemic.”

The government had indicated that new billing codes for work in hospital environments would be presented by now. But none of that information was available as of last week, she said.

“The physicians are giving the Alberta Medical Association (AMA) time to work with the government in the hopes that these changes will be stopped, at the very least until this pandemic and everything is through,” she said.

Among physicians’ biggest issue was the AMA’s attempt to approach the government with a proposal that would save more money than what the current consultations would, except without devastating primary care in Alberta, she said.

“And the government is not interested. So physicians in Alberta are looking at that, feeling devalued, feeling abused, bullied, and many are looking at the prospect of working elsewhere when all is said and done,” she said.

A number of rural physicians she knows are prepared to withdraw privileges from Alberta Health Services — even during the pandemic — if they are expected to work without a contract, she said.

“Who else would work without a contract, without knowing what you’re going to get paid by a government that just wants to take and take from you?”

A bigger risk, she said, is that doctors, who are already under duress from the pandemic, are also very upset by the situation with the government’s approach.

“That makes them distracted at a time when they need to be laser-focused on their patients,” she said.

Whenever a doctor enters a room with a distracted mind, the physician is at greater risk of not only exposing themselves to COVID — and subsequently potentially bringing the virus back to their families — but also the increased odds of making medical errors, she said.

“If you’re overtired, if you’re distressed or distraught, you don’t make the best decisions at a time when everybody needs you to,” she said, flabbergasted that the government could possibly believe that continuing to push the changes through will be to the benefit of Albertans.

“Once this first wave is over, they’ll go. They don’t have to stay in Alberta. They’re getting emails welcoming them back to the United Kingdom, welcoming them to other provinces,” she said.

“Other provinces are salivating at the thought of our doctors leaving.”

While doctors have clinics to run and ends to meet, the bottom line is not about the money, she said.

“It’s about the fact that those other governments actually care about their physicians and want to put their well-being forward and recognize the need that they have,” she said, adding physicians in Alberta are not getting that feeling from the government at all.

Aside from negatively impacted patient care, another shared concern among medical professionals in the province is the potential for a repeat of the Klein era brain drain. She said the changes to health care imposed by today’s government will set the province back by 15 years. From a physician standpoint, Alberta did not recover from the Klein government’s cuts until about 2002, and Warren would just as well prefer not to see history repeat itself.

“We really had to go in and put in incentives to get physicians,” she said, adding that from a nursing perspective, the province never recovered.

“There’s an entire nursing generation that’s missing. They went elsewhere, and they didn’t come back…I see a repeat of that happening.”

“They go where work is, and it’s not in Alberta. We won’t get that cohort back.”

Meanwhile, physicians who run a practice don’t just hire local staff and contractors to do repairs and upkeep in their effort to provide quality service to patients, she said.

“They are also expected to man the front lines in the hospital setting, to work in the emergency department, to deliver babies, to look after patients in acute care,” she said.

Yet with the changes the government wants to impose, “that was no longer going to be something that physicians could feasibly continue to do.”

And now, there is a pandemic preventing doctors from seeing patients in their clinics, instead opting for virtual meetings to keep people safe as per the Alberta College of Physicians and Surgeons' instructions to social distance patients and only see those that need to be seen, she said.

Additionally, looming ahead remains the impending April 1 pay cut for any work done in a hospital, she said.

“They’re expected to shoulder another cut that will affect all physicians in Alberta.”

When the government tore up its contract with AMA, another decision made, which had never even been a part of the original consultation proposal, was to stop a liability reimbursement program. Although all of the provinces reimburse to some level or another the insurance that physicians must carry, Alberta Health is decreasing that amount by 60 per cent, she said.

“We’re not clear what that’ll mean for us in Sundre,” she said, expecting costs will “increase quite significantly. The biggest consequence of that will be the loss of obstetrics in our community.”

Carrying the insurance that is required to perform obstetrical deliveries represents nearly double the cost of working in emergency, or anywhere else. And with the low number of deliveries in Sundre during a time when making ends meet is becoming a growing struggle, doctors won’t have that available, she said.

“That is not something that anybody wants to have happen.”

Point of no return

The damage being done — not only in terms of the physician-government relationship but also to the provision of rural health care going forward — is reaching a point of no return “where it may be too late to undo it.”

“I think minister Shandro has assumed if he continued to push, that physicians would cave. But the physicians, rather than doing that, will leave. And they’ll leave sooner than later,” she said.

“They will do what we need to do to get through wave 1 (of COVID-19), and then they’ll go. This is an issue globally — it’s not like Alberta is unique. But Alberta is unique in the way that it’s approached its physicians throughout all of this. Why stay in abusive relationship?”

The temporary freeze on layoffs for the duration of the pandemic provides little comfort in the long-term, said Warren, who is worried those jobs will, short of a big change, be back on the chopping block before very long.

“This government is so focused on the only way to save money by cutting salaries of front line workers, without realizing that they’re going to have to increase revenue,” she said.

The easiest way to do that, she added, is an Alberta health care insurance premium that is based on income.

“But they just don’t want to see it.”

The UCP should follow an example set by the NDP, whose government had during its brief time at the helm approached the AMA requesting to trim back some funding, leaving those decisions in the hands of those at the front lines of delivering health care, she said.

“We were able to take out $500 million from the physician budget without hurting patient care,” she said, adding the AMA is best suited to identify areas for efficiency and cost savings that won’t negatively affect patients.

Despite everything, she remains hopeful that there will eventually be an improved relationship between all of the health care providers, whether nurses, kitchen aides, or custodial staff.

“We all work together, and we can’t function without each other.”

No additional support for Sundre RCMP
Aug 7, 2020 1:00 PM
Comments
We welcome your feedback and encourage you to share your thoughts. We ask that you be respectful of others and their points of view, refrain from personal attacks and stay on topic. To learn about our commenting policies and how we moderate, please read our Community Guidelines.