Offer made on former Foothills Lodge 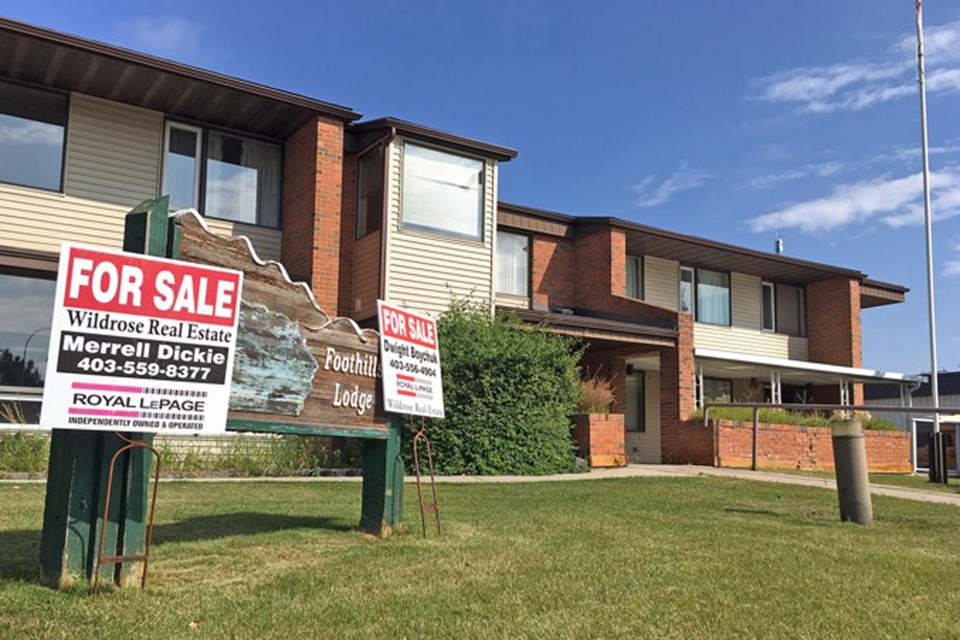 The former Foothills Lodge is set to come under new ownership from an established, Calgary-based and family-run business that is already operating two care centres in Calgary. File photo/MVP Staff

SUNDRE — After nearly five years of lingering uncertainty waiting in limbo, the future of the former Foothills Lodge is looking brighter than ever.

Sitting vacant since the summer of 2016 when the facility’s residents were relocated to the new Sundre Seniors Supportive Living centre — which is operated by Mountain View Seniors’ Housing, an Olds-based not-for-profit organization — the provincially-owned building, located north of the fire hall on the corner of First Street and First Avenue NW, was recently tentatively sold for about $1.15 million.

It had been previously listed at $2.8 million.

“It went lower than list price, but I believe that it was a very fair offer, given the condition of the property,” said Sarah Kennedy, a local realtor with Redline Real Estate Group.

Although the official closing date is Sept. 30, Kennedy said the sale went through in late August. The new owner, she added, runs a family-operated care home company in Calgary. A spokesperson with the provincial ministry of Seniors and Housing confirmed the offer of purchase, which is expected to close at the end of the month.

“They’re an established business — they’ve been in this business for a long time,” Kennedy said.

Joel Bond, the owner of Travois Holdings Ltd., which successfully bid on the property, said during a phone interview that he sees a lot of potential in the building.

“In my gut, the feel of that whole town to me is genuinely peaceful. There’s just a nice feeling there — that it’s a nice home,” said Bond, who’s been in the business for about as long as he can remember.

“I mean, I’m from Calgary, and I would be happy to retire there,” he said.

His company currently operates the Mayfair Care Centre, a long-term care facility for residents who require round-the-clock care, as well as the Glamorgan Care Centre, which is similar but caters more to a younger demographic and those coping with mental health issues as well, he said.

“We’ve ran those two buildings since the late 1970s, and they were built in the late 1960s. For us, Sundre represents a building that would be our newest asset.”

Essentially following in the footsteps of his father, whom Bond worked with for some 20-plus years, he picked up the torch and continued the family enterprise after his dad died about five years ago.

When an acquaintance and past business partner from Sundre brought the former Foothills Lodge to his attention about a year ago, Bond saw an opportunity to expand their modest operation.

“I came up there probably last November and had a look around, and it really looked like the buildings that I inherited when I first started when I was 20” at the turn of the millennium, he said.

“Certainly requires some work. But our intent — with hopefully a lot of local help — is to bring the building up to speed and have it be a home, for exactly which seniors, I’m not sure yet,” he said.

The plan for now, he added, is to focus on developing a full-time care facility, but the scope has not been determined.

“It’s going to be for people that require 24-hour care. To the extent of that care, I’m not sure yet. But we would bring it up to new building code…the intent is to bring it back to a very functional, fully occupied building,” he said.

“I think, in the long-term, it will present itself. But do I have all of the pieces figured out right now? The answer is: not quite.”

As a result of COVID-19, he said a trend towards increased demand for private rooms that was already occurring prior to the lockdowns ended up being magnified by the pandemic.

“That building has the potential to be a very nice home for a population like that,” he said.

“What I see there, is a really nice shell — it obviously needs some work. But I really like the location in town.”

The lodge is perfectly situated in a central area that offers nearby access to, for example, emergency medical services, physicians, the Bearberry Creek, as well as both the Sundre West Country Centre and the Sundre Community Centre, he said.

“To me, it’s sort of like a little bit of a pillar of the town — that’s where you want to be.”

As the provincial government previously owned the structure, the process has taken some time. But that’s OK with Bond, who said rushing is never the solution anyway.

He added there have been some requests for proposals from the province that are due by the end of the month, and that the company is moving forward to put one together for Sundre.

“We’re applying for that initial one as we speak.”

Once the renovations are complete and the 45-bed facility operational -- which he imagines could take at least one year but largely hinges on how quickly work can get underway pending government approval -- Bond said he estimates creating as many as 60 to 70 jobs, including a mix of full- and part-time positions.

Prior to the purchase, the building was extensively investigated to identify potential deficiencies such as asbestos, the roof, as well as mechanical or structural issues, he said, adding nothing alarming was discovered.

“We really didn’t find anything inhibiting us — nothing that would prevent us from wanting to move forward. So, that’s the good news about that building,” he said.

Despite the required upgrades to make the facility compliant with codes, Bond still sees “a very useful place.”

“Not everything needs to be brand new. The buildings that I operate and run are not new buildings, but they serve a purpose — they do very nicely for the community that they serve, and the same goes for that building as well,” he said.

“My gut says to me, they’re not making really nice quaint places more often in the world. That’s one of them to me that seems like a perfect fit or a perfect place for seniors to be and have all of the services in town close by,” he said about the former Foothills Lodge.

“There’s just something really peaceful about that little facility on that street in that little town.”

As a family-based business that has no board of directors, Bond said, “I’m not fancy people. There’s nothing fancy in what we do — we make food, we clean rooms.”

There is of course a level complexity involved in delivering medication and care, but he said everyone plays an important role.

“The people that make the food and take out the garbage, are equally as important as the person that signs the cheques in what we do — everybody has to do their thing,” he said.

“It’s my intention there that hopefully a lot of people in the community would want to do some of the work, and would help with the renovations, help with the upkeep of the building, and be employed for us — that would be the best.”