Sundre Santas volunteers have been busy for about two months getting ready for the holiday season from new digs, said the program’s coordinator.
Nov 13, 2018 10:00 AM By: Simon Ducatel 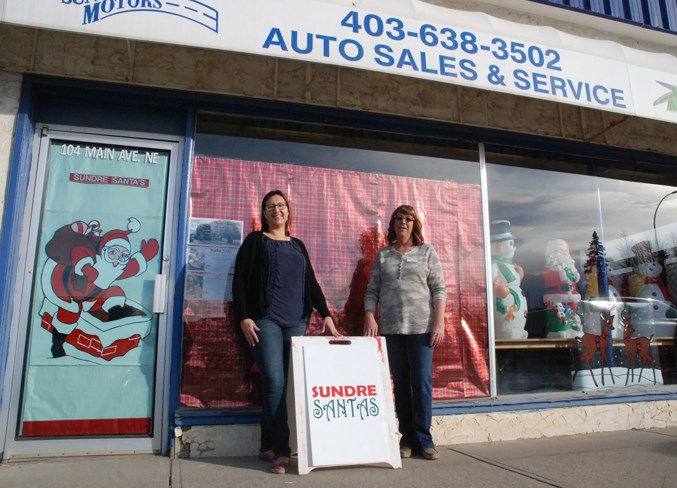 Cherie Johnson, Sundre Santas program coordinator, left, and Susan Brace, the workshop&#8217;s manager, in front of the new digs set up at the former Sundre Motors building on 104 Main Avenue.

Sundre Santas volunteers have been busy for about two months getting ready for the holiday season from new digs, said the program’s coordinator.

“Sundre Santas is already underway,” said coordinator Cherie Johnson, adding the program got started in September and that securing a new location had been a priority.

Previously situated in the office space immediately adjacent to and connected with the Sundre Fire Department’s hall, she said the workshop was relocated this year to the former Sundre Motors building at 104 Main Avenue East, between V&S and Country Road RV.

“We have the workshop set up and ready, and we’re accepting donations.”

While Johnson coordinates the program through the Greenwood Neighbourhood Place Society’s office at the Sundre Community Centre, she said a new manager, Susan Brace, is going to be at the workshop to provide assistance when people drop off donations as well as help volunteers keep everything organized.

All of the organizing, planning and decision-making for the annual Sundre Santas program comes out of GNP’s office, while the actual delivery of the program is facilitated through the workshop, said Johnson, who has served as the program’s coordinator for three years.

“We need quite a large space to set up all that,” she said.

However, even though the new workshop offers plenty of space, she said the location might not be permanent.

“I don’t think it’ll be long term because all of these buildings around the community are for sale,” she said, adding the building’s owner, Ed Morgan, was generous to allow the use of the space this year.

“But I don’t know that it’ll happen again next year,” she said, adding if the building is sold or rented by then, a new workshop will be sought.

Requests for a new home had previously been circulated around the community and the former Sundre Motors building was the best fit for the program in terms of available space as well as accessibility, she said.

Efforts are made to be as inclusive as possible for children, so organizers wanted to ensure the location could be relatively easily reached on foot, she said, adding some other options that arose following the request were out of town.

“It’s super important to keep kids involved — that was a main objective,” she said.

The search for a new venue stemmed largely from the municipality’s decision to rent out the available office space next to the fire hall full time. Sundre Santas runs essentially two months, so the coordinator said she understands the municipality’s desire to try and rent the space year-round.

“That’s what makes it difficult for us,” she said about needing a temporary accommodation.

The coordinator said she is motivated by a passion of collaborating as well as building relationships with a wide range of community members of all ages who share a passion to help others through the holiday season, which for some can be a difficult time of year.

She said that so many local organizations pitch in that naming them all would be difficult without inadvertently overlooking some and added the overall effort that involves the contributions of children and seniors seems to bridge generations together.

“The reason why I do this is I just love to work with the volunteers,” she said.

“This program wouldn’t happen without them.”

The application timeline for people interested in registering for the program goes from Nov. 13 to Nov. 27. Forms are available in numerous locations including but not limited to the GNP office, the municipal office, both of the local medical clinics as well as drugstores and the customer service desk at IGA, she said, adding families who reside within the Sundre school district are eligible.

“Basically, if the school bus would pick up the students to go to school, you’re within that” boundary, she said.