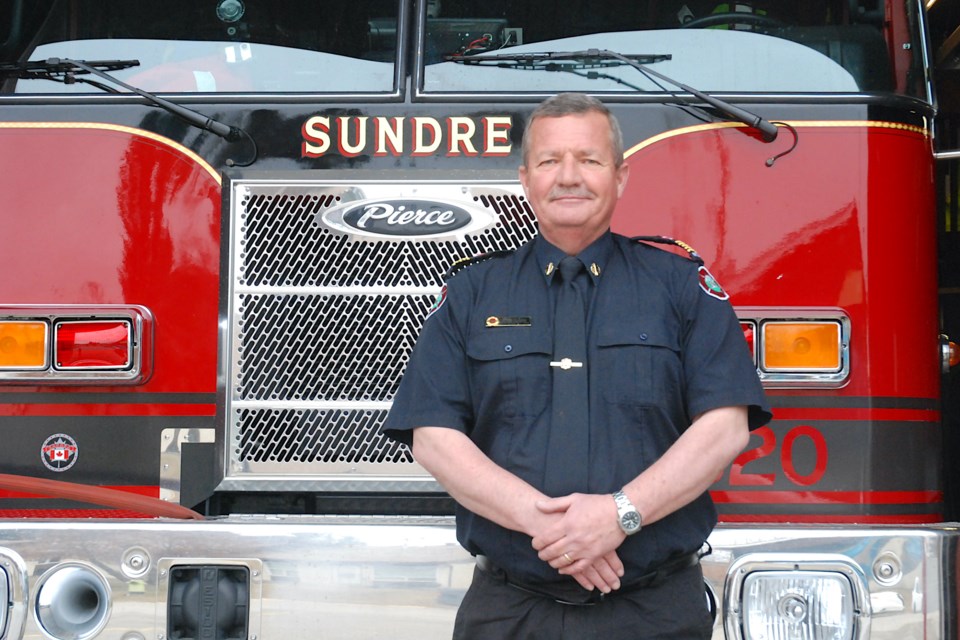 Ross Clews, who previously served as the Sundre Fire Department's chief until stepping down in 2010, was recently offered the full-time position and agreed to return, bringing with him extensive experience and a lengthy list of credentials. Simon Ducatel/MVP Staff

SUNDRE — A familiar face and former chief has returned from retirement to lead the Sundre Fire Department.

Ross Clews, who previously served on the local department from 1998 until he stepped down as chief in 2010, was offered the full-time position following a hiring process that narrowed down to three a list of highly qualified and experienced contenders.

Although his first official day was on Monday, March 22, Clews had since late last summer returned to serve the department after the sudden departure of the last chief, Marty Butts, prompted several senior members to resign in protest.

“We’re going forward from here. Anything that’s happened in the past — in my opinion — is in the past, and has nothing to do with the department going forward,” Clews said during an interview on March 24.

As far as Clews is concerned, that history is water under the bridge and the department cannot remain stuck looking backwards, but must instead prepare to build for the future and continue serving and protecting the community.

“We’ve made every call since I came on in September,” he said, when asked for his response to concerns expressed by some people in the community that the department had in the wake of those resignations been left inadequately prepared to respond to emergencies.

Pressed as to whether he would refute claims the town and surrounding area were not properly protected, Clews said, “I do refute that.”

“We’ve always had members attend, and we’ve always done well. The numbers we have right now are doing it,” he said, adding, “It would be nice to have more, but we’ve been able to keep business as usual.”

The department’s roster as of last week had 16 firefighters, and the chief said there are plans to conduct a recruitment drive as well as to provide additional training opportunities to upgrade qualifications and certifications for existing members.

“My main ambition here is to get everybody trained up. The people that I have here now are very committed, very dedicated, very loyal and very knowledgeable,” he said.

“They’re here for the right reasons — it’s about community service, it’s about helping.”

Not one to shy away from a challenge — his most recent work history involved a five-year stint working for a partly Shell-owned company in southern Iraq that he returned from in 2019 — Clews has no time or energy to waste dwelling on negatives, and actually enjoys trying to find actionable solutions to make the best of a tough situation.

“I deal with the challenges,” he said.

“Challenges are just another word for opportunities for growth and learning.”

The new chief hit the ground running, with the department responding to a medical first response call on his first official day, followed the next by a debris burn northeast of Sundre that got out of control when wind gusts spread the flames into the bush. That response, which start to finish and being back at the hall and ready for service took several hours, involved eight members, a pumper, a wildland truck as well as a water tender, he said.

When Clews first relocated to Sundre back in 1998 after being transferred to town, he arrived with plenty of experience already under his belt.

“This is my third department I’ve been on,” he said.

Just about his first order of business when he originally moved here was to visit the fire hall to offer a hand, as he made of habit of doing whenever moving to a new town. Initially told the department had a full roster and didn’t need additional members, Clews said he was asked about his qualifications.

Having previously served the Onoway Fire Department from 1983-89, a community located west of Edmonton where he grew up, he eventually went on to serve the Swan Hills Fire Department from 1989-98 after being transferred there. Along the way, he built up an impressive resume and accumulated plenty of experience including certification as an emergency medical responder that John Whitesell — who was the Sundre chief at the time Clews moved to town — deemed invaluable.

“I was informed the next day I was on the Sundre Fire Department,” he said.

The most rewarding aspect of serving a fire department, he said, is not only getting the job done well and enjoying the successes along the way, but also being able to go home with the knowledge a positive difference has been made.

These days, recruiting members seems to have become harder than it once was, he said.

“That’s a general thing right across the country.”

From a personal perspective, the proverbial road that led Clews to become a firefighter found him. When he lived out in the country in the Onoway area, grass fires were all too common, and he found himself compelled to help out. So, getting involved with the fire department was a natural transition and everything snowballed from there.

“I guess it was a hobby — it’s never been my line of work,” he said, when asked what originally inspired him to pursue a path in firefighting.

“I enjoy doing it, helping out the community.”

Seeing a need that had to be filled and knowing he had the qualifications to get the job done, Clews said he decided to apply for the full-time position.

But while he’s committed to steering the department forward on a stable course, he does not anticipate staying for the long term.

“I’m not planning on making a big career out of this,” he said candidly, adding his primary focus will be not only getting the members’ trained up to standards, but also to develop a dependable succession plan.

“If everything goes well, (in) five years maybe I will have people transitioned into roles to take over as chief. I want to offer them as much as I can give them.”