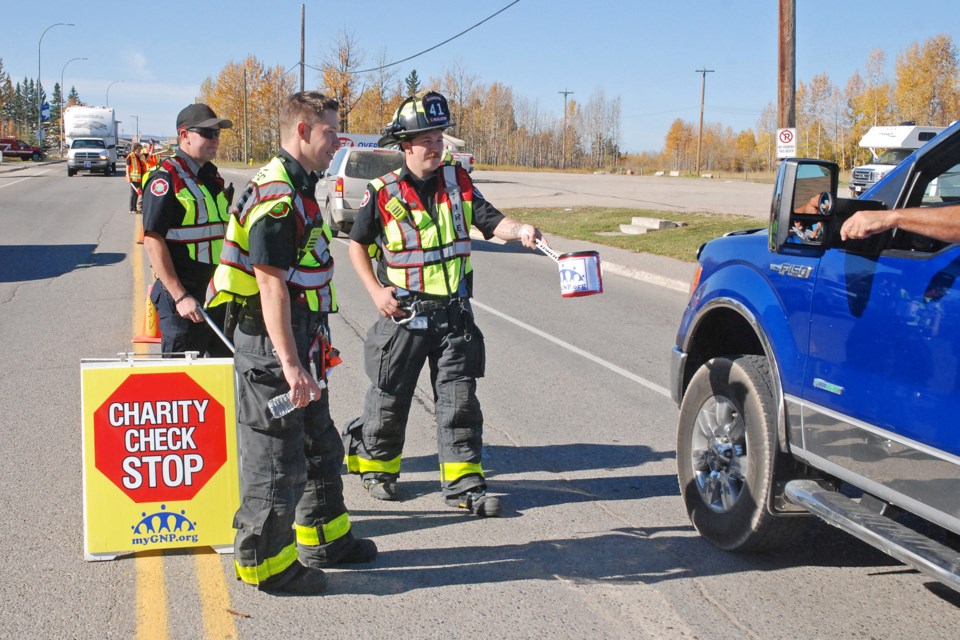 SUNDRE — The annual myGNP Charity Check Stop is taking place earlier than ever this year.

The main fundraiser of the year for the Greenwood Neighbourhood Place Society had been held in October the last couple of years, after traditionally being scheduled in November.

“Initially, avoiding the cold was just one reason, but not the only one,” said Sari Werezak, GNP’s executive director.

Among the other factors that prompted the decision to bump up the date even earlier this year, were the desire to avoid doubling up on other fundraising efforts like the Tim Hortons Smile Cookie Campaign in September, as well as the fact the time to begin the Sundre Santa’s campaign is quickly coming around the corner, Werezak said by email.

So, getting an earlier start will also provide additional time to spread out the effort involved and reduce burn-out on the fundraising committee, she said.

Members of the Sundre Fire Department as well as the society’s board alongside other volunteers, are expected to be out this Friday from 11 a.m. to 5 p.m. directly in front of the new Freson Bros. grocery store on the Main Avenue-Highway 27 corridor through the downtown core, she said.

“We have the go ahead from the Alberta government to proceed with this event,” she said.

While volunteers will safely as per pandemic protocols be providing information pamphlets to passing motorists, there won’t be any treats distributed due to COVID-19, she said.

All of the proceeds raised go toward the charitable, not-for-profit society’s programs and services, including but not limited to: Sundre Santas; Family and Community Support Services; the Sundre Community Garden; the community volunteer income tax program; the new Sundre yet-to-be-named youth centre; as well as the free Sundre on the Go community newsletter.