Work at the site of the future medicinal cannabis production facility in Sundre has been getting underway recently.
0
Jul 17, 2018 10:00 AM By: Simon Ducatel 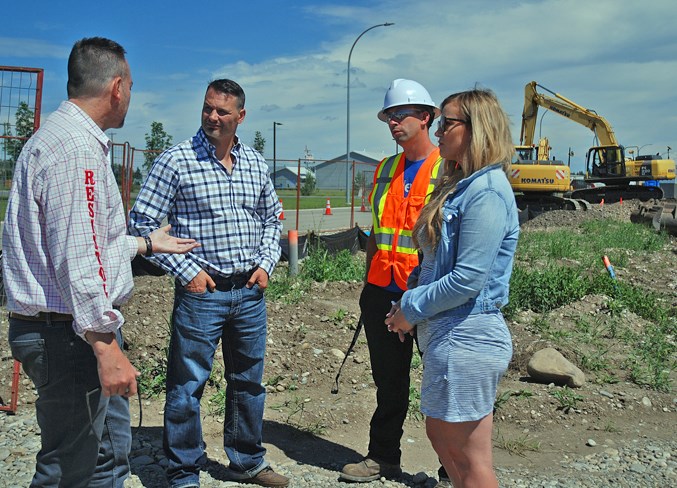 A construction crew was busy last Thursday upgrading a waterline to a six-inch conduit from two inches at the site of the future Candre Cannabis facility. Jesse Beaudry, left, president and CEO, dropped by the lot — which is located immediately south of the Westview Co-op Cardlock along Fourth Avenue SW — with Brittany Osberg, director of human resources and corporate services, to check out and chat about the progress with Wade Lefebvre, director of operations and head of security, as well as Ronnie Hulley, maintenance superintendent.

Work at the site of the future medicinal cannabis production facility in Sundre has been getting underway recently.

Anyone who drives by the lot — located south of the Westview Co-op Cardlock along Fourth Avenue southwest — will notice that temporary perimeter fencing as well as an office have been set up, he said.

“There’s a lot of action out there — it’s looking like a real project site.”

Beaudry said the multi-million-dollar project is about where he was hoping it would be by now and that he’s pleased with the progress that has been made to date. Once the foundation is completed, the structure’s frame and exterior will go up next and could be completed this September, he added.

While the structure is going to by then essentially look complete from the outside, there will remain plenty of interior work that will be able to proceed regardless of any unfavourable weather. The company still intends to start cultivating medicinal grade cannabis before the year’s end, he said.

Sooner rather than later in the fourth quarter “is when we’d like to commission the facility and begin the growing process.”

Candre remains under active review with Health Canada, and the next step is for the federal regulatory agency to inspect the facility, once complete, to confirm compliance with the government’s regulations and that the company adhered with previously outlined plans, he said.

“They want to ensure that we build what we said we would.”

Once granted the green light, Candre will receive a cultivation licence and be able to start growing. But before reaching that stage, the company plans to begin the hiring process next month, he said.

While the company has been receiving positive feedback from the public congratulating the progress to date, many people have also been inquiring about potential employment opportunities, he said.

Although security clearances will be an absolute requirement for some of the key positions including cultivation, there will be numerous opportunities that cater to a variety of skill sets that can be transferred from service sector jobs. For example, backgrounds in administration, finance, IT, security, operations, and shipping will all be welcome, he previously said during a public engagement session in March.

The project’s first phase is for an approximately 42,000-square-foot vertical growing facility that could — depending on initial success — proceed to a larger second phase of 100,000 square feet. Although further down the line, plans also include a possible 500,000-square-foot third phase expansion.

The municipality has been fantastic to work with, said Beaudry, adding staff have facilitated permit processes from development through to foundation work and the actual building’s construction.

So far, everything is coming along as planned, said Linda Nelson, Sundre’s chief administrative officer.

The project represents a massive boost to the local economy. In 2017, the municipality had by the end of June a total building construction value of about $1.8 million, of which roughly $1.3 million was the result of attached dwelling unit developments in Prairie Creek, located off Fourth Avenue southwest behind the grocery story, she said.

But to date this year by the end of June, the municipality’s building construction value was just shy of $11.6 million. About $10 million of that sum is attributable to the Candre facility, she said.

That substantial figure does not include the proposed gated condominium community subdivision west of Centre Street north, she said.

“It’s the construction value of what is being built so far.”