What started out as a six-week grassroots venture to provide a hand-up to people experiencing hard times has become a full-time initiative for the community.
Feb 23, 2016 12:00 AM By: Simon Ducatel 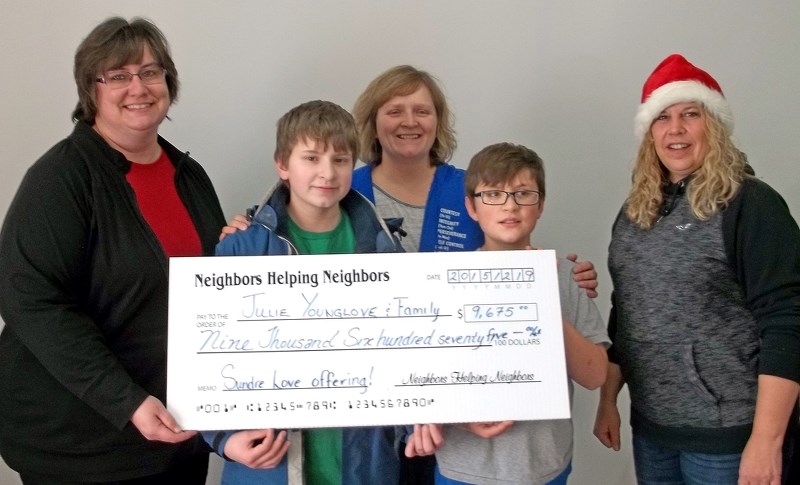 What started out as a six-week grassroots venture to provide a hand-up to people experiencing hard times has become a full-time initiative for the community.

Neighbors Helping Neighbors was founded in September 2013 by Shelley Kohut, who's also a local realtor.

In a nutshell, residents who have items that are in good condition but no longer need or want them can donate them at Kohut's office, which is located at 308 Main Avenue West. The donated goods are then auctioned through Facebook, she said, adding people who successfully bid on the items can then pick them up.

"A lot of people will step forward and cover the need through our site ó it's not all through auctions, we also get donations," she said.

The funds raised through donations and the online auctions are in turn used to provide assistance to residents who are experiencing a difficult time, such as a job loss or medical condition that reduces their normal income.

"It's not to maintain a lifestyle ó it's to help people that are in their normal lifestyle and they hit some kind of hurdle in their life, especially these days," said Kohut.

The idea is to provide temporary assistance and help people to get back on their feet without creating long-term dependency, she said.

In one situation, a father had undergone lung surgery and was unable to work for three months. So a double-income family was suddenly reduced to a single, low income. Being without that additional revenue "can put you so far behind the eight ball you never catch up," she said.

So once that family's situation became known to Neighbors Helping Neighbors, the organization stepped up to provide assistance by the way of food and gas cards. The family was also adopted for Christmas, she said.

"(We) made sure that they didn't get too far behind. Now he's back to work and they're able to maintain their normal lifestyle."

In another situation, a local senior had become a victim of identity theft and temporarily lost his Old Age Security pension, she said.

"The government was getting it figured out, but in the meantime, his income had dropped, which it wasn't a big income anyway, from about $1,200 to $500 a month."

Unable to afford boots following injuries to his feet, the senior ended up wearing slippers in the snow, she said.

"So we bought him new boots, we gave him food and gas cards and we carried him through that hurdle until he was able to get his funds back in place."

Neighbors Helping Neighbors gets referrals from a variety of sources including Greenwood Neighbourhood Place, local clinics, pharmacies, the Sundre hospital, and the schools, she said.

It all started in 2013, when Kohut, who attends services at McDougal Chapel, was among 10 volunteers who stepped forward following a call from Pastor Kent Janz.

"Nobody knew what was going to happen to them," she said.

"So he gave us all $100 and told us that we had to feed it into God's kingdom, use it for the help of other people, and then come back and tell what we did."

The idea to start Neighbors Helping Neighbors had already been floating in her mind for some time, so she said she knew right away what to do with the money.

"It was the catalyst that started this ó it's just grown since then."

Before long, Pamela Schrock joined on as a volunteer organizer, and her contribution has made possible more auctions, said Kohut.

"Thanks to her, we're running two auctions a week. I used to run one every couple of weeks," she said.

The organization provides a win-win service that benefits the entire community ó people looking to clear out usable goods that they no longer need can donate them and the funds raised through the auctions in turn help people in need, said Schrock.

Their desire to help stems from their faith, said Kohut.

"For both Pamela and I, it's a ministry. It's a thing we want to do because of our faith in the Lord," she said.

While volunteers are important to make the organization possible, the other part of the equation is a giving community.

"That's the big thing ó Sundre's a very generous community, and there's a lot of people that want to help people, and we just provided a conduit for them," said Kohut.

Depending on the month, the organization raises anywhere from about $2,000 to $3,000 to help people get back on their feet without becoming dependent on the help, she said.