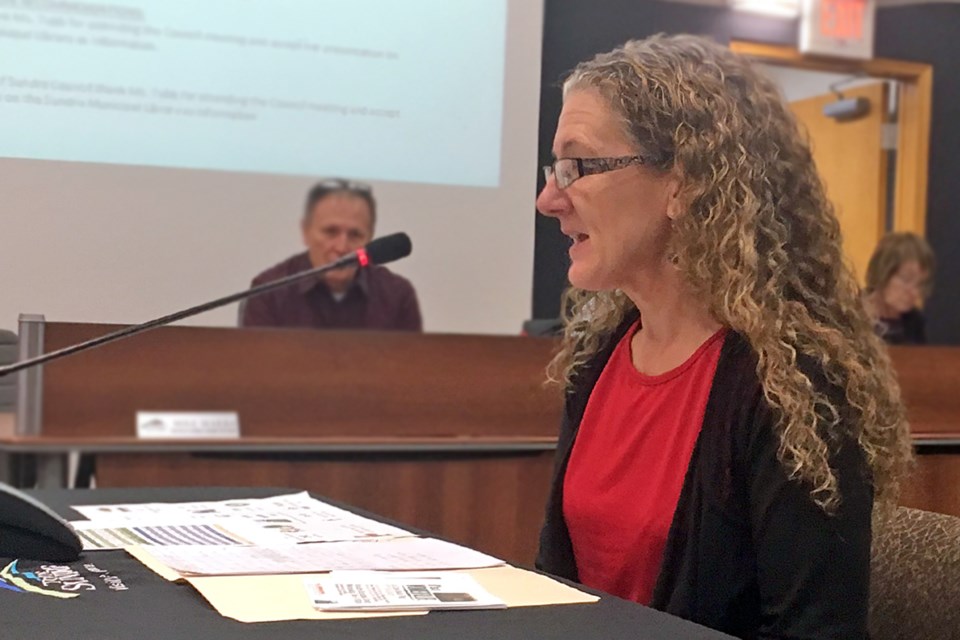 SUNDRE - Every dollar spent on a library represents an investment in a community by delivering programs and services that on average save each patron hundreds of dollars, according to local library officials.

Karen Tubb, manager of the Sundre Municipal Library, addressed council during the Nov. 18 meeting to provide some historical and statistical background on the facility as well as some insight on the library board’s recently approved roughly $235,000 budget for 2020.

“But before we talk about these numbers, I’d like to share some other numbers with you,” said Tubb, adding the first is 1949, when “a few remarkable women had a vision for a public library in Sundre.”

With humble beginnings of two shelves stocked mostly with donated books that were housed in the former Women’s Institute building near the Sundre and District Museum, the first local library was established, she said.

“Here we are, 70 years later, four moves later, housed in the community centre,” she said, adding the library is as busy serving the Sundre area as ever.

“I wanted to give you a glimpse into some of the numbers, some of the ways, that the library enriches our community.”

Among the highlights was the number of patrons of all ages, totalling about 1,030, as well as 15 community partnerships including collaborative efforts with Greenwood Neighbourhood Place, the Sundre and District Museum, Sundre Santas, and the Central Alberta Refugee Effort.

Additionally, numerous community groups and clubs — ranging from the Sundre Camera Club to the Sundre Palliative Care Association and many in between — meet frequently at the library, which provides a comfortable space for people to engage in conversations, she said.

The library also offers opportunities to build bridges between generations, she said. A group of teens and adults meets weekly to play Dungeons and Dragons and the Cyber Seniors program pairs tech-savvy youths with older adults who are seeking some help learning to navigate the digital world.

The library also provides plenty of options for e-programs, including eBooks and audio books, online computer tutorial programs for school-age children, as well as access to a genealogy research program facilitated by a volunteer who provides assistance.

“Over 250 connections have been made just this year between families,” she said.

Furthermore, the library’s Wi-Fi service racked up 24,000 connections this year from people using either their smartphones, tablets or laptops, she said.

There are also a little more than 25,000 items available for checkout — not only books, DVDs and magazines, but also snowshoes and walking poles, a telescope, bocce balls, a GPS, and even a radon detector, she added.

By using the library’s programs and services, she said the average patron has saved about $223 just since March.

Reading a quote from a study conducted in the U.S., she called libraries a cornerstone for communities that are also great equalizers, which provide resources and access to information to all, regardless of who they are.

The library's budget anticipates almost $235,000 in total revenue for 2020 with a negligible surplus of $23. The Town of Sundre's $105,000 contribution is forecast to incrementally increase a bit every year up to $111,415 by 2023, a cumulative hike of a little more than $6,000 spread over three years, which would require council's approval.

Coun. Cheri Funke inquired whether the requested requisition increases for the library had been factored into the municipality's budget, or whether the numbers presented were new.

“These numbers were incorporated into the budget,” said Chris Albert, Sundre’s director of corporate services and acting chief administrative officer for the meeting.

Without further questions from council, Mayor Terry Leslie took a couple of brief moments to express gratitude, and said the library’s history had a shared commonality with the Sundre Hospital and Care Centre in the sense that both projects were spearheaded and made a reality by a group of local women who came together to work towards improving the community.

“What I appreciate is that you’re constantly evolving,” said Leslie.

“You’re constantly looking for ways to make the library relevant.”

The numbers presented to council, such as the savings for patrons, he said, are a remarkable testament to the library’s efforts to act as an equalizer so people of any socio-economic background can access programs and resources.

In concluding her presentation, Tubb told council she had just a couple more numbers — or rather dates — to draw attention to: on Wednesday, Dec. 4, the library will be presenting a live radio play version of the story It’s A Wonderful Life, the cost of admission being a donation with proceeds supporting Sundre Santas, followed the next week on Wednesday, Dec. 11 by observance of the library’s 70th anniversary.

“We’ll be celebrating our birthday,” she said, extending an invitation to council.