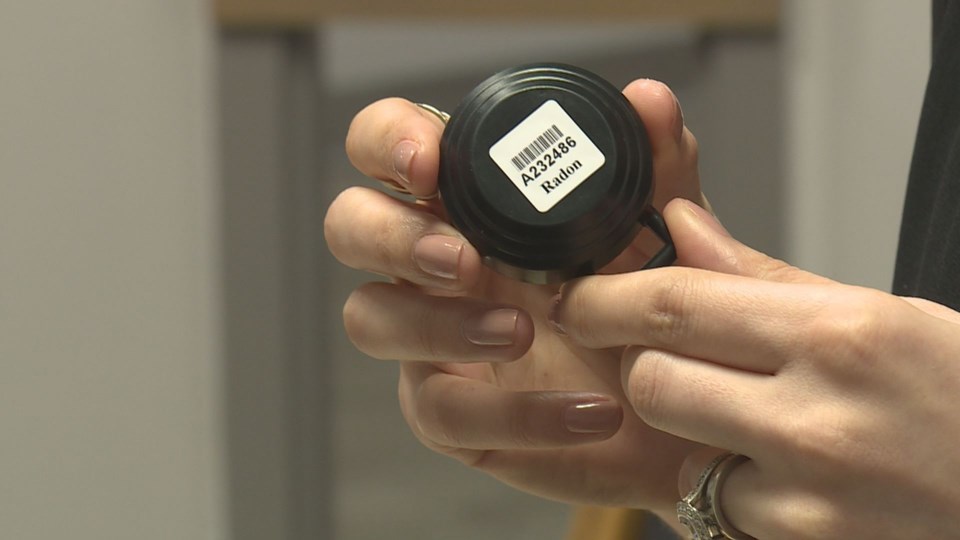 The Sundre Municipal Library teamed up with Take Action on Radon to deliver the 100 Radon Test Kit Challenge in Sundre. Most of the tests are spoken for, but some remain available. File photo

SUNDRE — Although most of the 100 free radon test kits made available through the local library in collaboration with a national health coalition have been spoken for, some remain available to anyone interested in participating.

The initiative, known as the 100 Radon Test Kit Challenge, follows on the heels of an earlier presentation last February at the library by John Horning, an earth scientist and member of the Canadian Association of Radon Scientists and Technologists who previously expressed concerns about the potential for some rural areas to have higher concentrations.

“I had certainly heard the word radon (before),” said Karen Tubb, library manager and community liaison for the 2020 100 Radon Test Kit Challenge.

“But honestly, I had no idea how prevalent the problem was in our area. And I really didn’t have a full grasp on how dangerous radon is.”

The odourless, tasteless and invisible radioactive gas rises from decaying radioactive substances in the earth with greater ease in more porous, gravel ground. It is the leading cause of lung cancer in non-smokers and the second-leading cause in smokers.

Although harmless outdoors where the gas quickly dilutes to safe levels in the air, radon has the potential to accumulate to unsafe concentrations in buildings.

“You don’t know it’s in your home unless you test — and it’s preventable, because we can mitigate for it,” said Tubb.

Considering what seems to be a higher incidence rate in the region, which accumulating additional data will more clearly illustrate, she called the initiative — made possible courtesy of Take Action on Radon — important for the area.

“And it’s free! For people who choose to participate, there’s no cost. It’s such a great opportunity for the people in our community to educate themselves on radon, but then also be sure that their homes are safe.”

Among those who committed to conducting the test at home, Tubb, who lives south of Sundre in the Bergen area, said a couple of coworkers at the library are also testing their homes — one west of town, and another within the municipal boundaries. There is also a varied mix of participants, many of whom live either in the immediate area surrounding Sundre, or right in town, she said.

“So we’re getting a good cross section of the area.”

Anyone who might be interested in signing up for a free test kit need only contact the library at 403-638-4000 to line up arrangements. Although the tests were to be distributed the week following Thanksgiving, Tubb said a coordinator with Take Action on Radon confirmed new registrations would still be accepted for a little while.

When she spoke with The Albertan, there were 80 confirmed registrations out of an available 100. The tests will “absolutely” be sent along regardless of whether they are not fully spoken for.

“The goal is 100, but the organizers (with Take Action on Radon) are actually very pleased even with 80. They feel that’s really good participation for a community of our size,” she said.

“They’ve been doing this for a few years now. So, they have a better sense of what participation levels would look like in various size communities, and they have indicated to us that 80 is a good number. But we certainly have room for more, and we’re hoping to get a few more.”

Kits will be available for pickup at the library, and very little effort is required in testing a home.

Aside from signing up for the program and filling out both a pre- and post-test period survey online, she said it’s just a matter of placing for several months a small, plastic puck in a room where people spend most of their time at home.

The kits come with instructions recommending the most suitable place to set up in a home, but the general rule of thumb is to determine what part of the house is most used, she said.

“They (Take Action on Radon) suggested an area where you might spend four hours, or more, of your time. Most people think basement, but if you don’t spend any time in your basement, that’s not a good place to put it.”

After waiting for 100 days — roughly three months — participants then return the tester to the library in a sealed plastic baggie.

“Then, we send the testers off, and people receive their individual results in four to six weeks.”

The tests will be collected at the library near the end of January, so results could reasonably be expected some time later in February or early March, she said. Although details and dates have yet to be nailed down, Tubb also anticipates a follow-up, videoconference presentation in the future after the results are in.

Tubb expressed appreciation for the assistance from representatives with Health Canada and Take Action on Radon, as well as Horning.

“They’ve been a great resource for us.”

A University of Calgary study shows that one in six homes in Alberta test above Health Canada’s radon guideline, reads a portion of a Take Action on Radon press release issued earlier this month.

Pam Warkentin, executive director of the Canadian Association of Radon Scientists and Technologists as well as project manager for Take Action on Radon, said she was pleased by the level of interest and enthusiasm demonstrated by the area’s residents who were keen to embark on the project.

With Canadians spending much more of their time at home this year as a result of the pandemic and with winter looming around the corner, this is the perfect time for people to test their homes and ensure that the air they breathe is healthy, the press release states.

Visit the library’s website for more information, or check out TakeActionOnRadon.ca to learn more about radon and how to test your home.