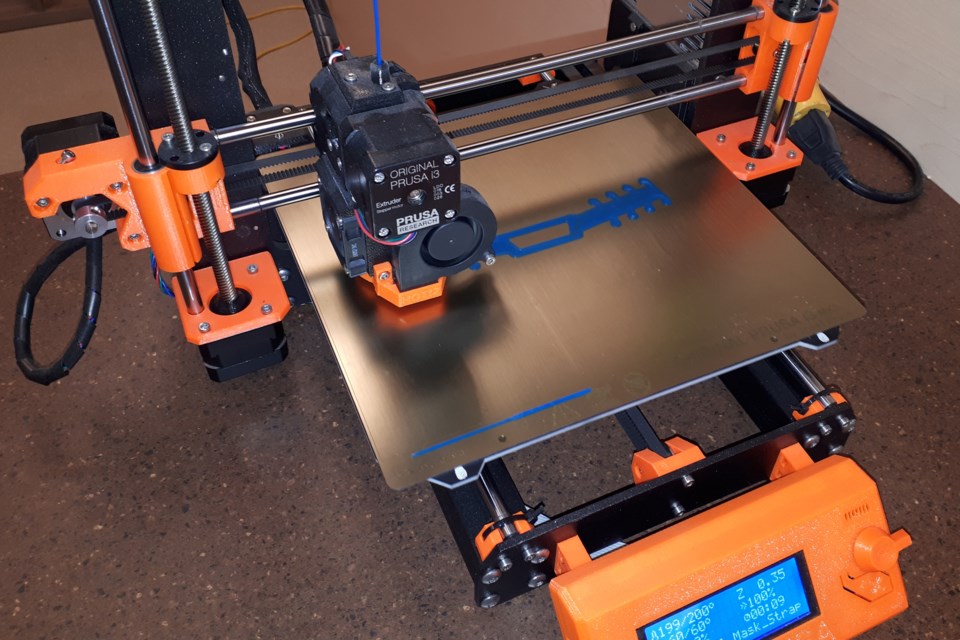 Sundre Municipal Library staff recently put the library's 3D printer to use producing ear guards for staff at the Mountain View Seniors' Housing lodge that help to reduce the pressure from the elastics on masks. Submitted photo

SUNDRE — Seeking a way to provide help during the COVID-19 pandemic, the local library’s program coordinator followed up on a suggested idea to relieve some pressure.

Equipped with a 3D printer, library staff was able to produce a number of ear guard clips that rest on the back of the head of someone wearing a mask. Instead of wrapping a mask’s elastics behind the ears, which in some cases over extended periods can cause irritation or discomfort, the band is hooked to the plastic clip, offering instant relief.

The idea was to start with a smaller batch to determine whether the ear guard clips might be considered of value, said Willihnganz, adding that library manager Karen Tubb brought the samples over to the Sundre Seniors Supportive Living centre.

“They said they loved them,” said Willihnganz.

“So we printed another batch of 10 that we’ve taken over there,” she said.

Although there have been no further requests for additional ear guard clips received since last month, she said, “we’ll certainly print more if they are needed or wanted. If there were any other community, medical organizations or groups that would be interested, we would be happy to accommodate them.”

Willihnganz said the library never received a reply after initially reaching out to the provincial government to follow protocols and determine whether the ear guards might be welcome. So they turned to the Mountain View Seniors’ Housing facility in Sundre, where she said staff was receptive to the offer.

Sundre Municipal Library board member Laura Skorodenski had originally suggested the idea, said Willihnganz, who then went online to seek out free template files. The first tested template was not as functional, but she said a second model fit the bill quite nicely.

The 3D printer uses what is known as filament — which essentially resembles a roll of plastic string — that is heated up and used to mold a pre-determined digital design.

At about $1, each ear guard, which takes approximately 45 minutes to print, was very inexpensive to produce, she said.

“It’s pretty much just the cost of the filament.”

While the units delivered to the lodge were complimentary, patrons who might be interested in having another 3D template printed would be charged a set up fee plus however much filament is used, she said.

“It’s really based on the weight of what you’re printing.”

The project did not present a burden on the library’s budget, she said.

“It wasn’t too onerous. Even if it was, we would have been interested in doing it, just as a way to be able to support health professionals.”

During council’s teleconferenced meeting on May 25, when Tubb presented local officials with information about the library’s activities during the course of the pandemic, Coun. Cheri Funke praised the initiative.