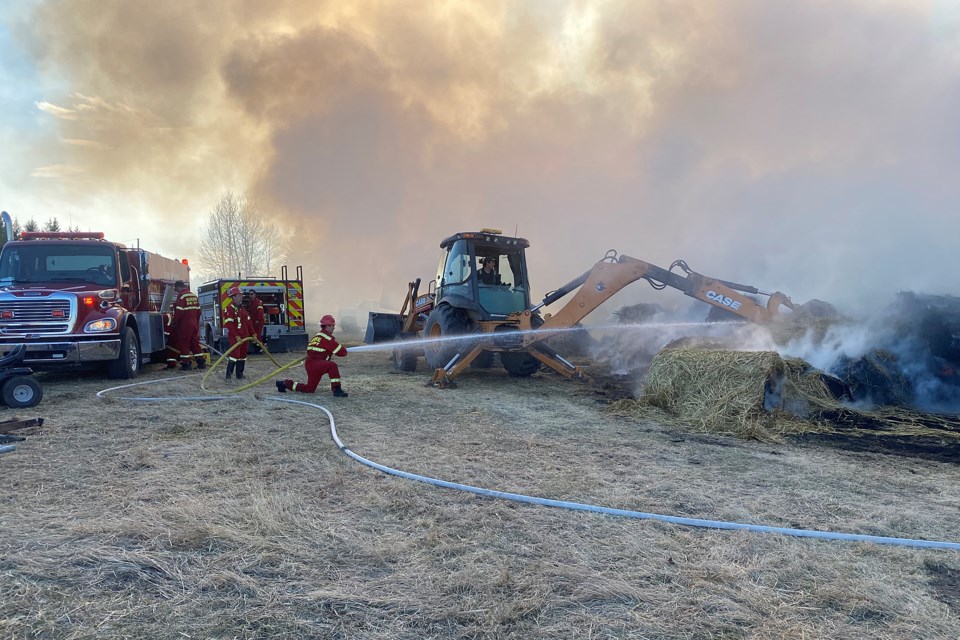 The Sundre Fire Department hastily responded on the evening of Wednesday, May 13 to a grass fire northwest of town that began as a private controlled burn on a farm. But sudden strong winds quickly spread the flames into nearby hay bales. Photo courtesy of Marty Butts

SUNDRE — A farmer’s attempt to conduct a grass burn nearly backfired to disastrous effect when sudden strong winds spread the blaze into some nearby hay bales last week.

On the evening of Wednesday, May 13 area residents might have observed a column of light grey smoke billowing up into the sky northwest of town.

Butts, who arrived first in his command truck, said a farmer was attempting to carry out a controlled grass burn when sudden strong winds spread the flames into about two dozen hay bales that were consumed by the fire.

The fire department promptly responded with a crew of about half a dozen members, a water tanker as well as some wild land response units, and was able to contain the fire, which took a few hours to put out. Safely extinguishing a straw bale blaze is time consuming as they are so tightly rolled that they must be broken up and spread out, he said.

Facilitating the process was welcome assistance from Mark Crouch, who brought over a backhoe from a neighbournig property to lend a most appreciated hand, said Butts.

The difference Crouch’s help made was “night and day,” said Butts, adding without that additional equipment, the crew would undoubtedly have been there hours longer.

Fortunately, the flames were stopped before reaching some outbuildings on the property. But a couple of garden mowers sustained heavy fire damage and although not written off will need new tires and repairs before again being useable, he said.

The landowner technically did not require a permit “because he was just doing a small little grass fire, which shouldn’t have been a big deal. But the wind came up,” explained Butts.

The fire chief encourages people who are planning to conduct a controlled burn to first check in with their local fire department to confirm whether there are any fire bans in place and to get an assessment on what conditions are like, as well as to keep firefigthers notified so responders are aware of what’s happening.

“And make sure you have enough resources and personnel, (as well as) some kind of fighting equipment (such as rakes, shovels, and garden hoses) to use if a fire happens to get away on you,” he said.

“Lots of people just burn grass by themselves, then the wind comes up and you have no chance.”

If ever in doubt, Butts recommends considering calling in an expert to carry out a controlled burn.

“There are companies out there that do it. Can be money well spent if things happen to go bad.”

Town lining up alternate spring workshop plans
Jun 1, 2020 9:00 AM
Comments
We welcome your feedback and encourage you to share your thoughts. We ask that you be respectful of others and their points of view, refrain from personal attacks and stay on topic. To learn about our commenting policies and how we moderate, please read our Community Guidelines.