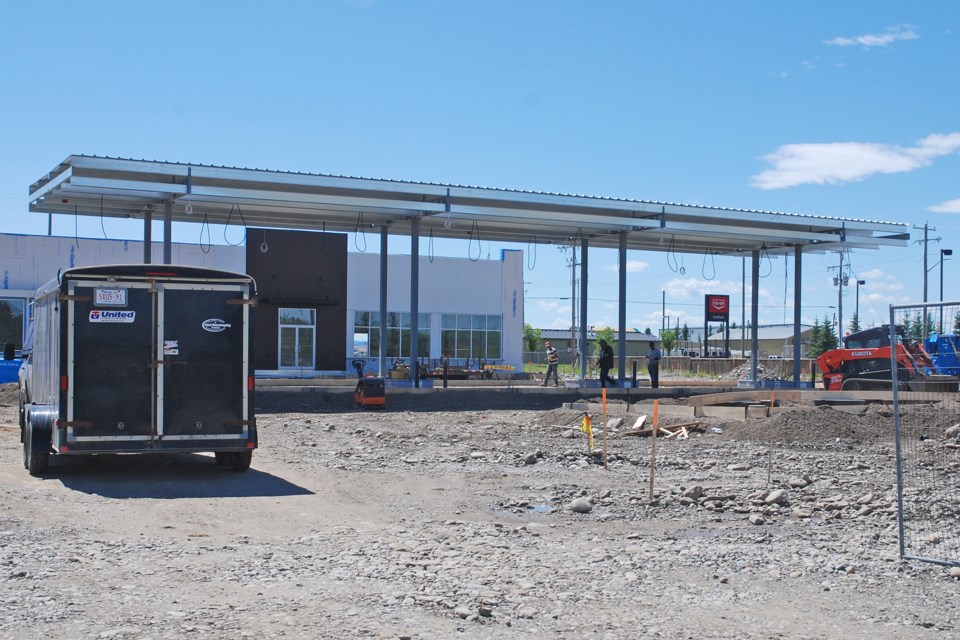 People who frequent Main Avenue West near Tim Hortons at the intersection with Rge. Rd. 54 have by now undoubtedly noticed construction is underway for a new development that will feature a gas station and convenience store combination, along with a McDonald's. Provided all goes according to plan, construction is expected to be completed in September. Simon Ducatel/MVP Staff

SUNDRE — Provided all goes according to plan, residents and visitors will later this September see the iconic golden arches on the west side of town.

People who frequent Main Avenue West near Tim Hortons at the intersection with Rge. Rd. 54, have by now undoubtedly noticed construction is underway for the new development, which will also include a gas station and convenience store, along with the fast food franchise.

Sundre’s chief administrative officer Linda Nelson last week confirmed that McDonald’s is going to have a new location in town, a project estimated at a value of about $1.5 million.

“They’ve applied for permits,” said Nelson, adding the municipality is quick in navigating through the process.

“We approved that in 2019. And of course, COVID hit, so things slowed down a bit. But now they’re going full force again,” she said during an interview at her office.

“They’re hoping to be open by September. That’s what the plan is.”

She said that timeline will in large part depend on the weather cooperating, but construction has already reached the point where crews could begin working indoors if they are unable to work outside. Nelson added she does not anticipate rising cases of COVID-19 in Alberta will hamper progress at this point.

The administrator could not yet confirm which company would be operating the gas station and convenience store as development permits for signage had at the time not been submitted.

Without diving into additional details, she also said other projects are on the docket.

“There’s a lot going on — a lot of development happening,” she said.

“There’s more development in Sundre right now, and more plans for development in the very near future, than has been in a generation in this community.”

Although the municipal office was, and remains, closed to the public due to the pandemic, she said staff have still been very busy.

“Behind the scenes, we’re doing a lot of work.”