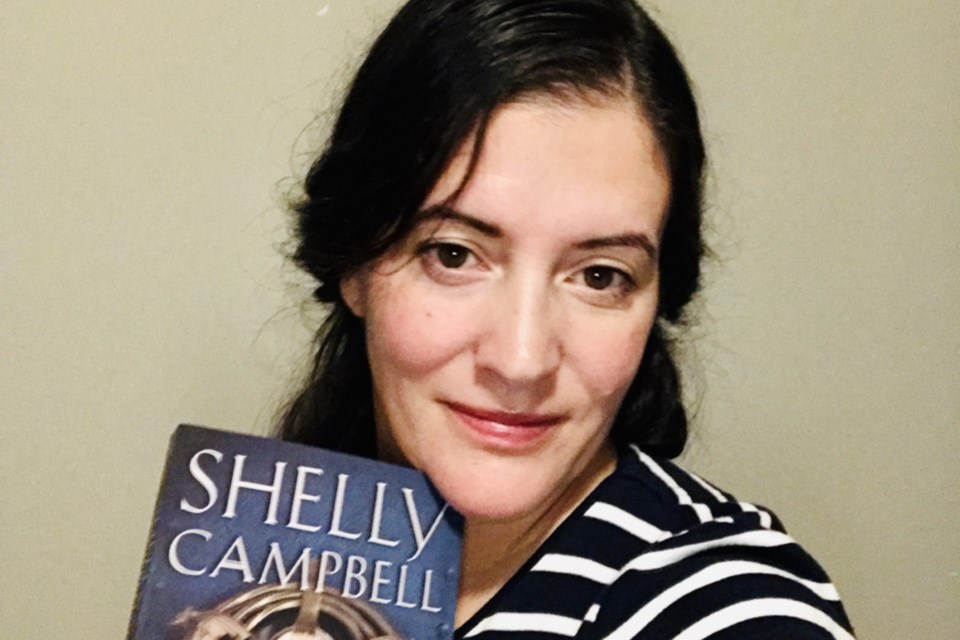 Former Sundre resident Shelly Campbell described as surreal the experience of finally having her first fantasy novel, Under the Lesser Moon, published earlier this month after she originally started developing the idea more than 20 years ago. Submitted photo

SUNDRE — The logistics of life sometimes have a tendency to delay dreams. But given enough time, passion and perseverance typically triumph in the long run.

After pressing the pause button on her hopes to become an author more than 20 years ago, former Sundre resident Shelly Campbell, née Lamb, recently received a copy of her first published fantasy novel.

“It’s my debut,” said Campbell during a phone interview.

Under the Lesser Moon explores a primitive, superstitious stone-age culture’s desperate struggle for survival in what a press release describes as a “brutal, merciless world” of resource scarcity and fabled dragons that once led their ancestors “across the wastelands, away from storms, and toward hunting grounds.”

“It’s a culture that’s dying out. They’re starving and their world is going extinct.”

Predating any semblance of the bronze or iron age and large scale agriculture, the tribes are comprised of nomadic hunter-gatherers who toil just to scrounge enough food to survive another day. In a desperate bid to save themselves from oblivion, they turn to sacrificing unwitting firstborn sons to appease a goddess in the hopes of gaining her favour to herald the dragons’ return to restore past prosperity.

Drawing inspiration from humanity’s own history dating back to long lost civilizations such as the Aztecs when people feared a coming apocalypse could only be stayed by offering human sacrifices to their gods, Campbell sought to blend historical precedents with a dose of fantasy.

“I kind of tried to incorporate all of that into this book, but there’s dragons as well,” she said.

Born in Calgary but raised in the Sundre area, Campbell originally conjured up the idea during her days at Sundre High School, which she graduated from in 1996.

“It’s been a long one, and I’m told that’s common for debut writers,” said the mother of two boys, adding she temporarily put her plans on hold to raise them.

All of these years later, finally seeing the finished, hard cover product is “pretty surreal,” she said.

“Writing’s kind of a lonely hobby. You’re just by yourself in front of a computer. I have a few critique partners, so there’s early feedback,” she said about the creative process.

“But having it out to readers and getting these reviews rolling in and seeing what people were interested in, what scenes they liked, and what scenes they just hated and made them want to put the book down — it’s really interesting seeing other people’s points of view. It’s just kind of surreal that it’s out there in the world and my words are affecting people!”

The book is the first in a planned two-part series, with the second already finished in first draft and in her editor’s hands.

“There might be more books in the same universe, but following different characters,” she added.

Geared towards a mature audience, the book is definitely not for young adults, with the press release comparing the story to George R.R. Martin’s famous fantasy series turned HBO hit saga, Game of Thrones.

“My husband, quite a few years ago, got me the first three books, and I really enjoyed them,” said Campbell, adding she also found the television adaptation interesting.

Although her story was not initially pitched as a dark book, when early reader reviews and feedback started coming in, “we realized everyone was saying it was darker than I thought it would be,” she said, adding there is a tendency in the world of fantasy writing for female authors to often get shelved in the category of young adult by default regardless of whether the book is more mature.

“Perhaps people saw that it’s a female author and expected a lighter read than it was,” she said with a laugh.

Although the fandom of Martin’s Games of Thrones book series continue to wait for the final instalments, Campbell plans to finish her next novel sooner rather than later.

“I guarantee I won’t make my readers wait as long for the next book in the series,” she said, chuckling.

During her high school years, she also drew inspiration from the science fiction and fantasy series Dragon Riders of Pern, by Anne McCaffery. Campbell said she enjoyed reading about a world that dove into examining the idea of dragons not necessarily as humanity’s existential foes, but rather as part of an intricate and symbiotic relationship with intertwined and codependent destinies that each require the other to survive.

“I thought it’d be cool to kind of examine a different angle of that with my book.”

Having relocated to Cochrane almost 10 years ago, Campbell occasionally makes time to return to Sundre, where her mom and many friends still call home.

Under the Lesser Moon is available online through either Amazon or Indigo, and can also be ordered at local book stores.