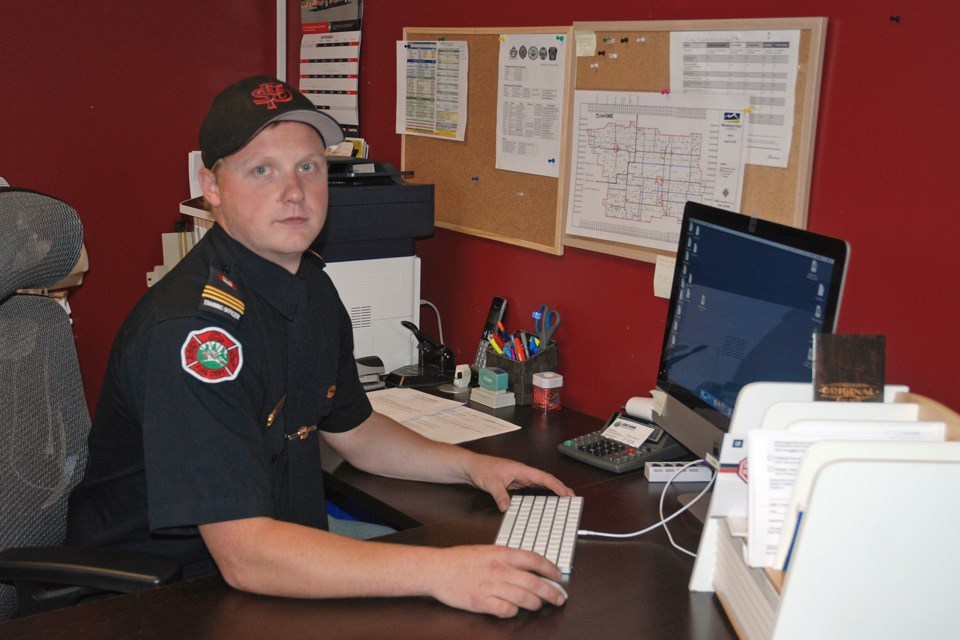 Alex Clews, the Sundre Fire Department's acting chief, has a lengthy family background in firefighting, and brings with him to the position some 12 years of experience that date back to when he first enlisted as a junior member at the age of 16. Simon Ducatel/MVP Staff

SUNDRE — Fighting fires and serving the community is a calling that seems ingrained in the local department’s new acting fire chief.

“I joined the fire service because I want to help the community, and I come from a long family background of firefighters,” said Alex Clews on Sept. 10 during a phone interview.

“It’s kind of in my blood, I guess you could say,” said Clews, who joined the Sundre Fire Department as a junior member 12 years ago at the age of 16.

A Sundre resident since 1998 when he was five, Clews graduated from the local high school in 2010, and said many relations — including his father, grandfather, uncles and cousins — serve and have served among a variety of departments all throughout Alberta.

Ross Clews, his father, served on the Sundre Fire Department from 1998 to 2010, and was the chief prior to former Chief Marty Butts.

“He retired from the fire service when my mother (Annette Clews) become mayor of Sundre back in 2010,” said Alex, adding Ross more recently returned to help provide training for newer members and bring them all up to standard.

“He came back because he’s certified to teach almost every fire course.”

Asked what compels him to serve as a firefighter, Alex expressed a passion for helping others.

“When people are at their worst, we come to help them out. It’s why we train hard and we’re prepared for it. It’s just a drive that I’ve had forever, is helping the community.”

To anyone who has considered joining the department’s ranks but yet to actually sign up, he said the camaraderie forges strong bonds.

“You join a good family — you get to help serve alongside some great people and help your community through trying and tough times.”

Members train every Wednesday night at the fire hall, and anyone who is interested in getting involved is encouraged to call 403-638-4044.

“They can get a hold of myself or any of the firefighters that are currently on, and we’ll be happy to show them around,” he said.

“We’ve had lots of people in the community actually step up and submit applications to come join, and we’ve had some past members that have come back to help us out so that we are fully staffed and fully operational.”

Five applications were submitted the first week after the former chief’s departure last month, when several members resigned in a show of solidarity.

Clews expressed gratitude for the vote of confidence from the firefighters who stayed with the department following the recent departure of the former chief.

“The remaining members are the ones who asked me to step up and take the leadership role on,” he said.

“It’s a great privilege to have the guys back me like that. We’re just going to work through and get through this trying time and help develop the fire department into the future.”

The consultant firm Behr Fire Service, brought in by the municipality to provide procedural assistance through the transition, has been “a great asset helping us out in what we need to do to take this department to the next step.”

Additionally, the help from past members including his father, who bring with them “lots of experience, knowledge and years of service,” has played an important role “to help us get our feet under us and move forward.”

The roster now has about 15 full-time members, and the acting chief said he and the department “are excited to move forward into the future and are looking forward to serving our community.”