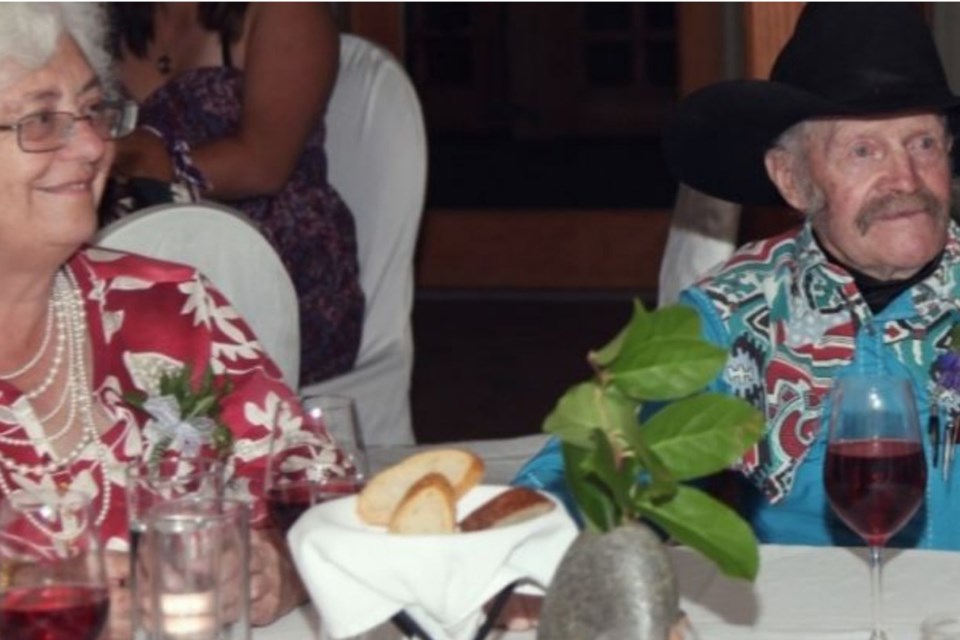 Bergen-area residents Ron and Olwyn Gale lost most of their belongings in the fallout of a fire that spread quickly through their mobile home last week. Photo courtesy GoFundMe

SUNDRE — Despite a prompt response from firefighters who last week arrived on the scene of a Bergen-area structure fire fewer than 15 minutes after an owner dialled 911, the contents of a senior couple’s mobile home were essentially entirely consumed by the raging inferno.

On Tuesday, Feb. 16 at around 3:30 p.m., the Sundre Fire Department received a call about a structure fire roughly northwest of Bergen.

“It was a typical mobile home fire. Unfortunately, when people live further away from a fire response, most of the time, if it’s a mobile home, it is fully involved by the time we get there — (it’s) just the way they’re designed. That’s my experience over the last 12 years."

The local department dispatched both a water tender as well as an engine, while the Cremona Fire Department also provided an additional tender and another engine, which was released from the scene earlier than the others to ensure the neighbouring community remained protected, he said.

“The crews knocked (the fire) down with mutual aid from Cremona,” he said.  “The tender helped shuttle water while we did overhaul and salvage, making sure all the hot spots were put out.”

Although the external structure was saved, very little inside the home survived the blaze, he said.

“Some contents of the house were still there, but everything was pretty much a total loss," he said.

About 15 members from both departments were involved throughout the course of the response, with the last firefighters leaving the scene at around 9:30 p.m., he said.

“The crews all worked great together, and we were very pleased with the mutual aid response from Cremona fire,” he said. “Our guys did a great job.”

The acting fire chief said the cause of the fire was “still being looked into.”

However, he added that firefighters were able to determine approximately where the blaze started, but cited homeowner privacy and declined to go further into detail.

Jim Bowhay, a Bergen-area farmer and long-time friend of the couple — Ron and Olwyn Gale — decided to launch a fundraising effort to help them recover and rebuild by opening a donation account in their name at the Mountain View Credit Union in Sundre.

Olwyn, who serves as the Bergen Church’s secretary, was working at the time the fire broke out, while Ron was at home. The flames overwhelmed the home so fast that Ron fled immediately, leaving everything behind — including his phone, said Bowhay.

Fortunately, Ron was able to escape essentially unscathed, and did not need to be taken to hospital for observation, he said.

“Ron jumped on his little quad there and buzzed up to the neighbours, ’cause the house was on fire and his cellphone was in the house,” he said, adding firefirefighters were coming up the laneway in just under 15 minutes from the moment the call went out.

For the time being, the couple is temporarily taking shelter in a neighbouring property until they get organized, he said.

“The neighbours have been real good with them,” he said.

Bowhay said he’s known the couple for many years.

“I think I’ve known ’em here since the early ’80s, is as far back as I can remember them,” he said, adding Ron, a cowboy poet, was once a horse and dog trainer.

The couple love living on their farm, and Bowhay said while they’re still coming up with a plan moving forward, they will most likely rebuild.

“They’re not going to relocate,” he said.  “You can’t talk Ron into going to the town or anything like that.”

Bowhay also expressed praise and gratitude for the crews who arrived so quickly.

“What I really wanna say is how professional and how good the fire department was,” he said, adding firefighters from both departments “did a top notch job.”

“We’re one of the luckiest communities around to have a fire system, and with a neighbouring system, like we’ve got,” he said.

“They’re just awesome, and very community minded,” he said, citing as an example the department’s volunteer effort to truck out water to flood the outdoor rink in Bergen.

“They go over and above, all the time," he said.

Donations for the Gales can be offered in person at the Mountain View Credit Union, and a GoFundMe campaign was also started.