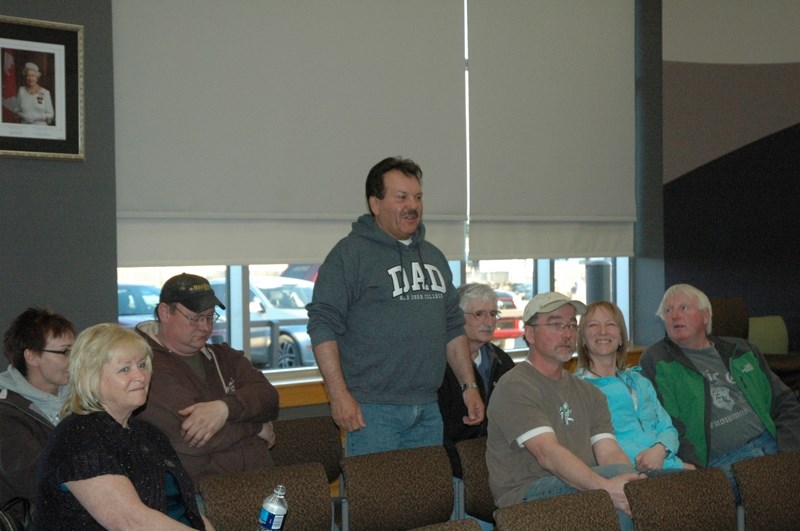 The committee will examine the issues surrounding east side services and options to bring water and wastewater services to the neighbourhood east of the Red Deer River.

“The Town of Sundre moved to create the committee after receiving feedback from the public indicating they would like to become more involved,” interim CAO Ryan Leuzinger said in a note to council.

The committee has been formed after town council defeated the proposed local improvement bylaw for the east side project last month.

A number of residents and business owners in east Sundre had expressed concerns about the cost to property owners of the plan proposed under that bylaw.

“Council requested that interested persons submit a letter to administration by April 1 so that this item may be compiled for the Apr. 11 council meeting. Council extended the deadline for the letter until Apr. 6,” he said.

Following last week's appointments, Mayor Clews said the committee will be meeting as soon as possible to get down to work.

In other council news, councillors passed first reading of the 2011 tax bylaw during last week's meeting.

The bylaw calls for $2,419,355 to be raised by general municipal taxation.

A tax bill can be calculated by multiplying the assessment of a property by the tax rate and dividing the total by 1,000.

“We are behind on our equipment replacement reserve, and that is why there will be an increase,” said Clews. “We will be using surpluses to offset some of the increase.

“There is the realization that we have equipment that needs replacing in the next few years and we have to start setting that money aside.”

During last week's council meeting, Mayor Clews asked that the bylaw receive only first reading so councillors could have a chance to further review the proposed rates.

The bylaw will come back before the next governance committee meeting.

Councillors have passed a motion to OK an extension of the town's franchise agreement with FortisAlberta.

The agreement between the Town of Sundre and FortisAlberta for their franchise is set to expire on Dec. 31 and it is required that notification is provided to the municipality 12 months prior to the expiry of the initial agreement, council heard.

“Although FortisAlberta, ATCO and the Alberta Urban Municipalities Association are currently in negotiations for the development of a new franchise agreement, it may not be ready by Dec. 31,” he said.

“Therefore an extension agreement has been offered that allows the agreement to extend for an additional five years, if required, but that may be replaced by the new franchise agreement once it has been approved by the Alberta Utilities Commission.”

AUMA has already come out in support of municipalities signing the extension agreements, council heard.

Councillors have passed a motion authorizing administration to use a $650,898 Alberta Municipal Infrastructure Program grant to extend the water and wastewater mains from the lift station on 7 Street N.E. to 1 Ave. N.E. and to reconstruct 7 Street N.E.

“This extension is an endeavour to assist council in focusing on this area to encourage economic development and growth for the town, which ultimately benefits the community as a whole,” he said.

“All costs associated with the new project will be proportionately shared to ensure that process is fair and equitable. Furthermore, this project will not cause an increase to taxation. The long-term sustainability of the town will be ensured with a project of this nature.”

Councillors have moved to sponsor the Sustainability Award, at a cost of $100, at the upcoming 2001 Community Awards and Volunteer Appreciation event.

“The town has been a strong supporter of sustainability and volunteerism within this community,” he said. “Sponsorship of this award would assist the FCSS in hosting a successful event and would allow the town to attach its name to a prestigious award within the community.”

Funds for the award will come from the town's sustainability operating budget.

“The sustainability award has been added to recognize and celebrate those who have taken the initiative to ensure Sundre is a sustainable place to live.”

Councillors have passed a motion approving the Sundre fire chief having full control over the donations budget line in the 2011 fire budget for purposes under $5,000.

“As a department head, the fire chief plays a vital part in the community,” he said. “He understands what the people need to hear on a daily basis what people would like their money to be put to.

“The fire chief knows best what the department has and what it requires. It is the recommendation of the fire chief to build a strong and trustworthy relationship with town council and staff. Passing this motion would be the first step in ensuring a cooperative relationship for years to come.”

Any monies placed into the fire department ‘donation' GL will be open and transparent to the community and to town council, council heard.

“The chief is more than willing to share with council during his quarterly reports of the activities of the department. Passing this month will see more donation coming into the fire department budget as historically most community members donated to the Fire and Rescue Society.”