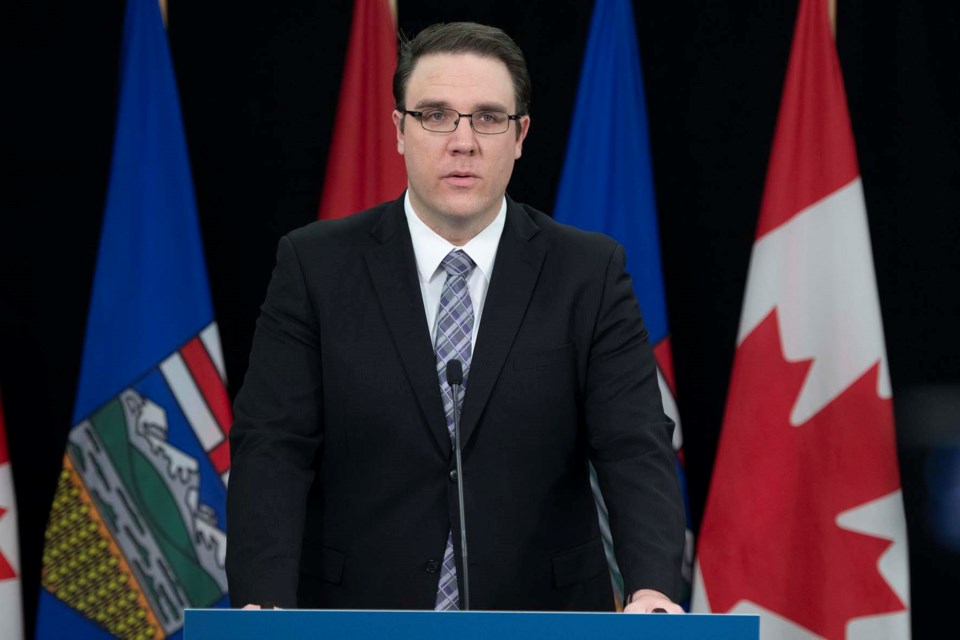 Environment and Parks Minister Jason Nixon at a media conference on Thursday, April 30, 2020. Photo courtesy of Chris Schwarz/Government of Alberta

SUNDRE - Any future coal mining along the Eastern Slopes, including west of Sundre and Cremona, would need to strictly adhere to provincial water protections regulations, says Jason Nixon, MLA for Rimbey-Rocky Mountain House-Sundre and Minister of Environment and Parks.

“We will be enforcing the Water Act to the full extent of the law and we are going to continue to evaluate our water rules to make sure they are protecting our head waters and environmentally sensitive areas,” said Nixon in an interview.

“We already have really strong rules in place to make sure that our Eastern Slopes are protected. We will make sure our policies are strong enough to protect the Eastern Slopes.”

Nixon’s comments come as the province announces that it is suspending all coal exploration projects in Category 2 lands.

The government is failing to adequately take into account the environmental, tourism and overall economic impact of any increase in coal mining ventures in western Alberta, critics say.

The multi-stakeholder Coal Policy Committee is reviewing the results of a recent public survey on coal mining in the province, a survey that has seen more than 25,000 respondents.

The Official opposition says the moratorium isn’t enough, and that the terms of reference for the Coal Policy Committee need to be expanded to include Alberta headwaters.

“We’ve heard from Albertans and they want enhanced regional plans and protections for Categories 3 and 4 before any coal project can ever be considered again,” said Martin Schmidt, NDP Environment and Parks critic.

In an open letter released last week, members of the University of Alberta’s Biological Science Department called on the government to halt any expansion of coal mining along the Eastern Slopes.

“Exploration, such as clear-cutting, road-building and blasting, is being done in many parts of the Eastern Slopes to prepare for these mines and it is already degrading vast landscapes and the headwaters of rivers,” the letter writers stated.

“If there was ever a coal mine that was applied for, in most of the Eastern Slopes it would already be impossible for a coal mine to develop because there are heavy restrictions on it, some of which have been put in place by me,” Nixon said.

“It would have to go through a vigorous public approval process that would take years and that doesn’t mean that they would get approved. They would have to meet all of the requirements.”