There are a few changes coming to the annual charity check stop fundraising drive. “The biggest one is that it’s earlier than usual,” said Sari Werezak, Greenwood Neighbourhood Place’s executive director.
Oct 11, 2019 9:00 AM By: Simon Ducatel 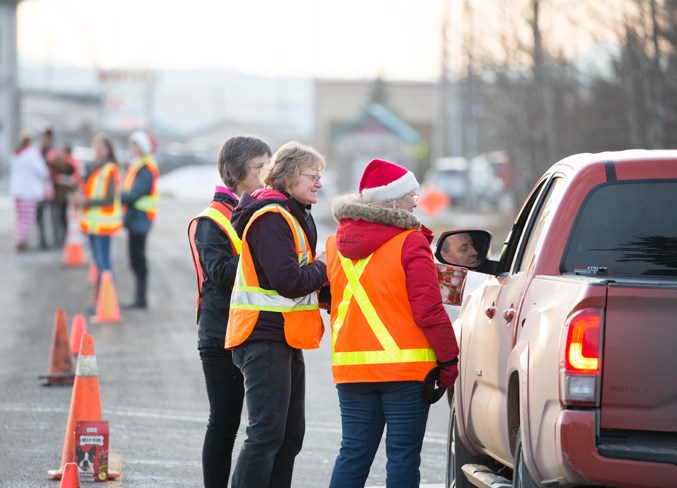 From left Laurie Waitham, Sandy McCarthy and Shelley Ingeveld collect donations during last year’s charity check stop. The Greenwood Neighbourhood Place Society’s board decided this year to reschedule and rebrand the fundraiser. Previously held in November, the myGNP Charity Check Stop takes place this Friday, Oct. 18 at the traditional location along the Highway 27 Main Avenue corridor in front of the grocery store.

There are a few changes coming to the annual charity check stop fundraising drive.

On more than one occasion over the years, the event had been postponed due to bad weather. But even when it was able to go ahead, the charity check stop that had traditionally been held in November was often met with sub-zero temperatures, which made getting through the day challenging for all of the volunteers involved, including members of the Sundre Fire Department and RCMP, she said.

So this year, the Greenwood Neighbourhood Place Society’s board decided to reschedule the event to Friday, Oct. 18, as well as rename the initiative the myGNP Charity Check Stop.

“Despite the new name, donations will continue to support Sundre Santas as needed, as well as other programs and services that assist many community members year round,” she said.

But the check stop’s location — along the Highway 27 Main Avenue corridor in front of the grocery store — remains unchanged, she said.

From 11 a.m. to 5 p.m., residents and motorists can expect to see more than a dozen GNP board members and volunteers, a few representatives from the Town of Sundre, the RCMP as well as the fire department lending a hand to facilitate the fundraising effort, she said.

While the fundraiser will now fall under the larger, all-encompassing umbrella for GNP programs, support for Sundre Santas will be unaffected because of the community’s continued generosity, which provides food, gifts and financial donations, she said.

“The Greenwood Neighbourhood Place Society offers a wide variety of supports,” she said.

“Therefore, the board unanimously decided that the proceeds from the check stop fundraiser be used to benefit all programs and services offered under the umbrella of the organization.”

Individuals and businesses who so desire still have the option to give directly to the Sundre Santas program, she added.

“Donations to the hamper program can be directed to the office and GNP can provide a charitable receipt for any financial gifts over $10.”

Program coordinator Cherie Johnson also remains at the helm of Sundre Santas and will continue to promote the usual events and volunteer opportunities. Additionally, Santa’s Workshop will be returning to the new location established last year at the former Sundre Motors building at 104 Main Avenue, she said.

The charity check stop originally started when ideas were discussed to raise funds without inadvertently competing against the fundraising efforts of other groups and organizations, she said.

Sundre’s first charity check stop was held in 2013 and there are similar events organized in Caroline as well as Rocky Mountain House, she said.

GNP received charitable status in 2012, allowing the organization to issue charitable tax receipts for donations to the hamper program as well as any of the society’s other programs, she said.

The check stop offers community-minded citizens, organizations and businesses an opportunity to become involved in giving and caring, as well as to show their support for the work GNP does, she said.

“It is the community spirit of Sundre that shines bright when we all work together.”