Sundre’s fire chief recently praised not only the commitment and dedication of his department’s volunteers, but also the continuous support extended by the community.
0
Oct 29, 2019 10:00 AM By: Simon Ducatel 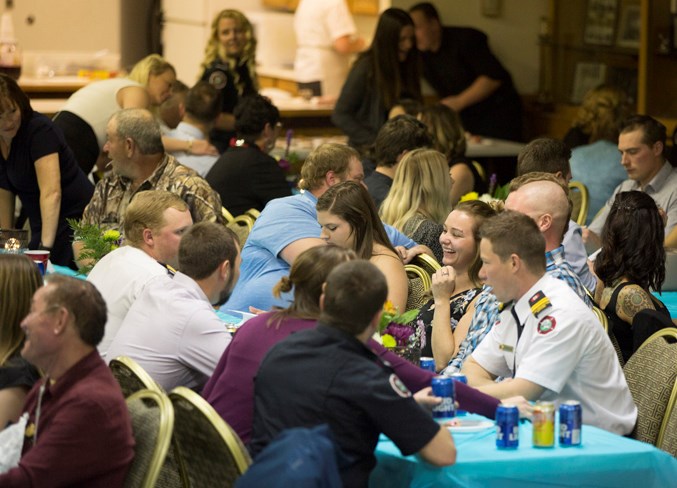 Attendees visit on Saturday, Oct. 19 during the Sundre Fireman’s Ball at the Sundre Legion. More than 100 people came out.

Sundre’s fire chief recently praised not only the commitment and dedication of his department’s volunteers, but also the continuous support extended by the community.

“We train for the worst (case scenarios) so we can go out there and do our best,” said Marty Butts during the annual Fireman’s Ball, which was hosted on Saturday, Oct. 19 at the Royal Canadian Legion Branch #223.

The annual dinner and dance offers a chance to recognize career milestones as well as to celebrate the members who endeavour to protect Sundre and the surrounding area.

During his address to the more than 100 people who attended, Butts also saluted the contributions of businesses in the community that play an important role facilitating enhanced training opportunities, such as Bulldog Towing and Capital Pressure, as well as the support from the families of the firefighters who day or night often drop what they’re doing to respond during an emergency.

Additionally, he acknowledged businesses like RPM that accommodate their employees whenever there’s a call.

“Without support from your employer, you can’t do it, you can’t leave work,” said Butts, expressing his gratitude.

“One more important thank you,” he added, “is our wives and girlfriends out there.”

Unpredictably running out the door to respond in an emergency can be a challenge for members with families, he said.

“We do deal with a lot of interesting calls — some are good, and some are pretty bad. At the end of the day, when you can go home and get a hug, that means a ton for us,” he said, followed by a round of applause.

The fire chief presented some plaques, including one recognizing the volunteer who has put in the most hours.

“To get this award, every time that pager goes off, you’re pretty much on the road heading to the call. That’s dedication,” said Butts in his salute to firefighter Daniel Corbett. 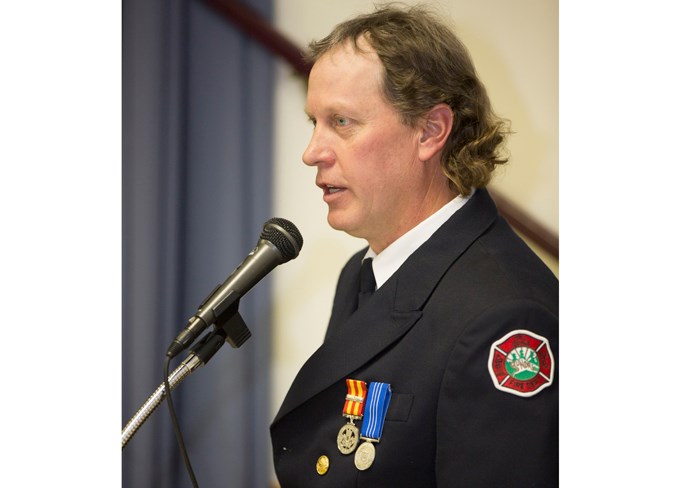 Medical calls, which are one of the most common the department responds to, can be “one of our worst nightmares,” but Corbett nevertheless intends to pursue a career path as a paramedic, said Butts.

Being an EMT or paramedic “takes a special person,” he said, adding, “I’m glad to have Dan on the department.”

Butts also recognized a former longtime member, Rob McBride, who was serving as training officer until he recently relocated back home out east.

“He was a senior firefighter with 20-some years — probably 30 years I’d better say, because he’d correct me if he was here!”

Over the past year and a half, the chief said some of the roster’s changes had created some challenges, but that he looks forward to the future with optimism and confidence in the newer members who have been stepping up to assume new responsibilities by filling vacancies left by some of the veteran members.

“Us senior guys, we’re going to be stepping down one day,” he said.

“These young guys, we appreciate them stepping up.”

Butts then presented Ryan Martens with the most dedicated firefighter award.

“It’s a hard one, because we have a lot of dedicated firefighters, but I can only pick one,” he said.

“He’s always asking where he can help,” he said, adding Martens agreed to fill the shoes of Frank Crouch, who after nine years was promoted to captain, as the new fire prevention officer.

Butts then called up all of the volunteers one at a time, recognizing their number of years of service with the department.

Last but not least, he also saluted Patty LaPointe’s invaluable help as the fire assistant.

“She’s my right hand, Patty — and almost my left too!” said Butts, adding she always “keeps the ball rolling” and “keeps it under control. It’s awesome to have you as a part of that team.”

Although technically part-time, he said LaPointe should be considered full-time because of everything she oversees and administers for the department.

“You do an awesome job, thank you,” he said followed by a raucous round of applause.

Following the evening’s formalities was some live music, with a safe drive home service organized by the students of the Grade 8 sailing trip.